Pittsburgh's first cat cafe impresses even before the felines show up. 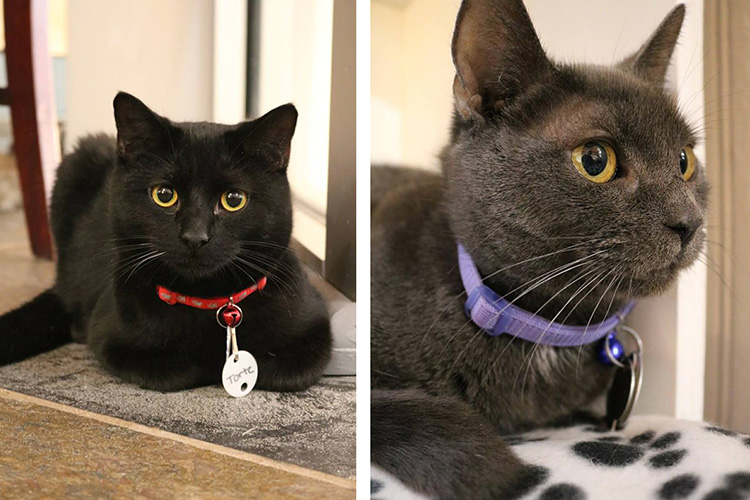 Look: I’m a dog person. I’ve only ever owned dogs; even in cohabitation situations, there has been collectively less than a year of my life spent sharing a dwelling with any form of feline. I have no particular objection to cats, and I’ve met a handful of cats with whom I was generally pleased.

But at your core, you’re either a dog person or a cat person. (The alleged existence of bunny people notwithstanding.) And I’m a dog person.

So I viewed the opening of Colony Cafe, the city’s first cat cafe, as a curiosity. I walked in more focused on the quality of the cocktails and snacks than the overall cuddliness of the cats. It was, to be plain, an outing that featured cats, rather than a cat-based outing.

To balance out my feline complacency, I brought two friends, each of whom serve as the ward of multiple cats. Even with their added enthusiasm for the whiskers-and-paws portion of the evening, we opened the night by sitting down for drinks and snacks. (The business is divided into a downstairs cafe and the upstairs cat loft; you can take drinks to the cats, but you can’t take cats to the drinks. Which I believe was the moral of one of Aesop’s fables, but I can’t be sure.)

I was quite pleased to find that the offerings at Colony Cafe are more than alluring, even for those who will not be availing themselves of the establishment’s feline opportunities. My group tried a pair of divergent, but equally delicious, cocktails — “The Panther,” an Irish whiskey variant, and “Henrietta Pussycat,” a vodka-based offering. The wine list was nothing to sneer at, either, and the menu (available after 4:30 p.m.) offers a range of shareable plates; we enjoyed a quartet of toasted canapes and a bell-pepper spread.

Colony Cafe doubles as a coffeeshop as well, with baked goods and a daily lunch special available (they’re open Tuesdays-Saturdays from 11 a.m.-8 p.m., barring a one-hour break at 2 o’clock). It’s enough to make Colony a draw for passersby looking for a quiet caffeine break or happy-hour beverage, yes — but, as you’ll plainly see from the ground floor through the windows above, most visitors are here for the cats.

For $8/hour, you can take your wine or coffee up to the cat loft, where 8-12 cats are ready for your attention and affection. Toys are strewn between comfortable chairs and large pillows, allowing you to cuddle up to the felines, who come from Animal Friends in Ohio Township. All of the cats at Colony Cafe are available for adoption; five have gone home with customers in the cafe’s first two weeks of operation, and applications are underway for four more.

This is the sort of amenity you never knew you needed but seems perfectly logical in action. An hour to lounge about with some friendly cats? For both the cat fancier and the feline-neutral, it’s an undoubtedly lovely way to spend $8. And the knowledge that this is done in the service of introducing cats in need to a wider pool of potential adopters sweetens the deal.

One of my compatriots had visited a number of similar businesses in other cities and called Colony Cafe the best example of the form she had seen. It’s easy to understand why; with equal care given to both sides of the business, the charm and appeal is undeniable.

Trust me. I’m a dog person, so I have no reason for bias.