Display your love for Pittsburgh with a hand-cut paper street map by local mapmaker Stentor Danielson. 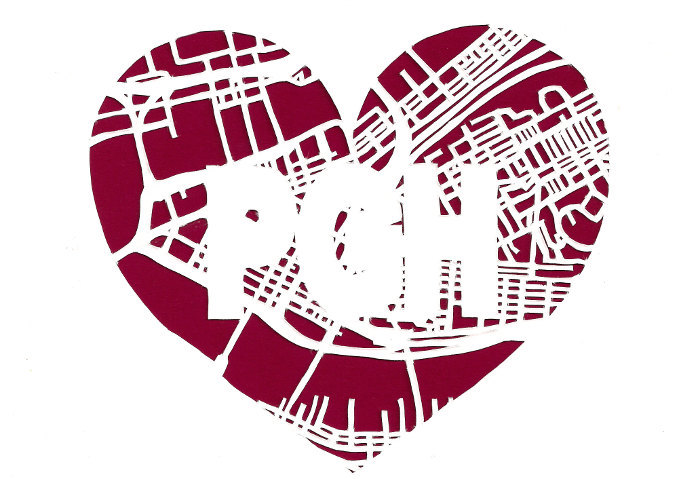 Pittsburgh has been receiving a lot of love lately. The ’Burgh regularly ranks among the nation’s most livable cities, and it has been lauded for everything from its stunning downtown skyline to its burgeoning food scene.

But perhaps no one loves Pittsburgh more than its residents, which is why we heart the HeartPGH map ($40) by Mapsburgh creator Stentor Danielson.

An assistant professor of geography at Slippery Rock University, Danielson made his first map — depicting the area between his house and his girlfriend’s residence — a few years ago.

His girlfriend loved the gift so much that she suggested selling them — and Mapsburgh was born.

Danielson, who has a Ph.D. in geography from Clark University in Massachusetts, today creates delicate hand-cut paper street maps, fantasy maps in the style of Tolkien and other cartographic art.

For example, the fantasy map of Pittsburgh ($10) includes the Desolation of Civic at the former Civic Arena while the Cathedral of Learning in Oakland is depicted as an actual castle tower.

Other fantasy-map subjects are Cleveland (boo!), Chicago and other large cities. Danielson also creates custom maps based on his customers’ requests.

This article appears in the March 2015 issue of Gotta Have It.
Categories: #GottaHaveIt