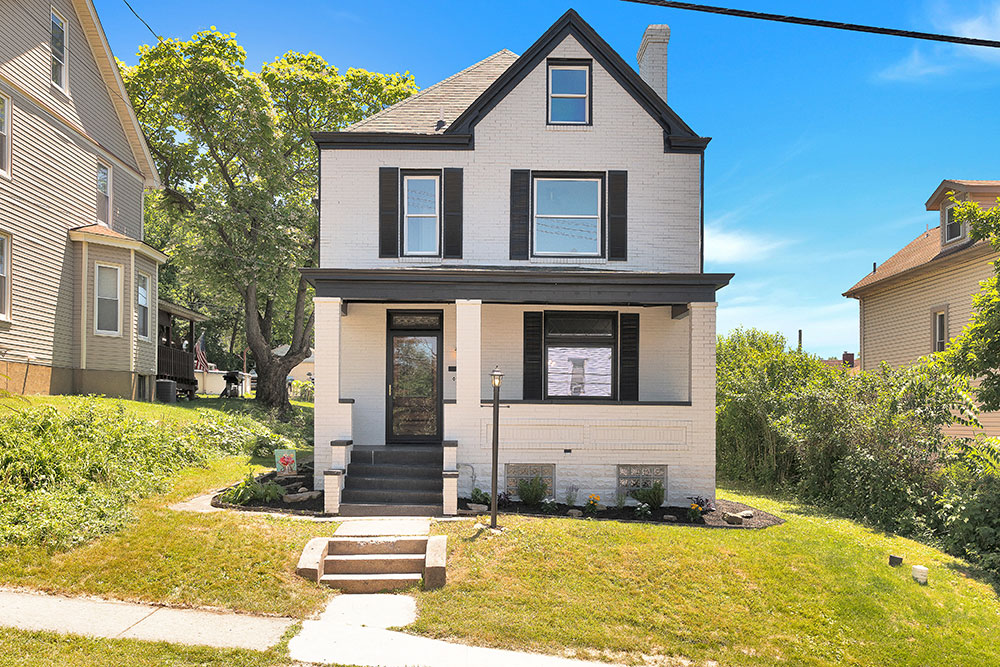 After featuring some pretty spectacular high-end housing around town, Hot Property this week marks the return of a beautifully renovated, century-old home that won’t break your budget.

Built in 1910 and located in Crafton, the four-bedroom, three-bathroom house at 40 Maplewood Ave., has undergone an extensive makeover under the watchful eyes of Logan Drew and Joe Perri, who own Fast Close Pittsburgh. 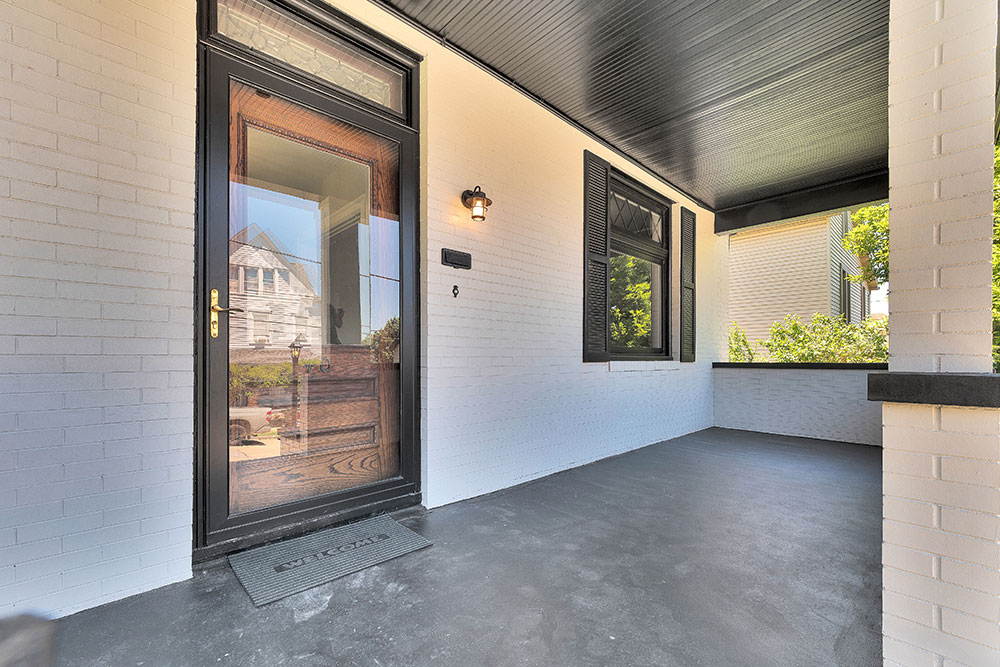 The home’s story actually began several years ago, when Drew moved back to Crafton with his wife and decided to invest in the neighborhood.

“I grew up here and moved out to Southern California,” he says. “My wife talked me into moving back home and we ended up buying a house in Crafton. We love it. We are invested in the neighborhood. There is a special feeling that comes from doing that.”

He and Perri both have day jobs in technology and banking but wanted something more hands-on to tackle. Drew had already managed several renovation flips during his time out west, so he was familiar with what to expect. The pair bought this home as their first project and oversaw the renovation, including hiring contractors and subcontractors and taking on simpler tasks such as cleanout and painting themselves. 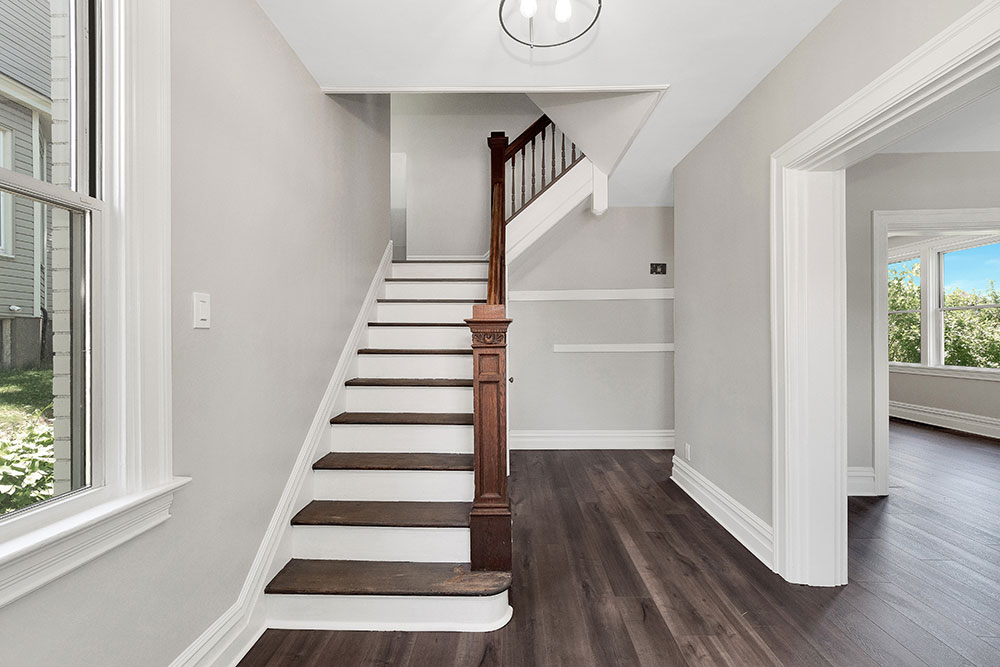 A fresh coat of creamy white paint has since been added to the home’s all-brick exterior. It sets the backdrop for sharp black accents on the trim, shutters and the front porch, including on the ceiling and the new glass storm door.

The original solid-oak front door, with the original leaded glass transom above it, lies behind the glass. Once inside, a neutral palette of soft gray paired with white trim allows the home’s original character to shine.

The entry features the original banisters and spindles. Underfoot are new luxury vinyl tile floors in a deep walnut shade. The original panel walls have been painted a fresh white, as has the rest of the original woodwork, including the 5-inch baseboards. 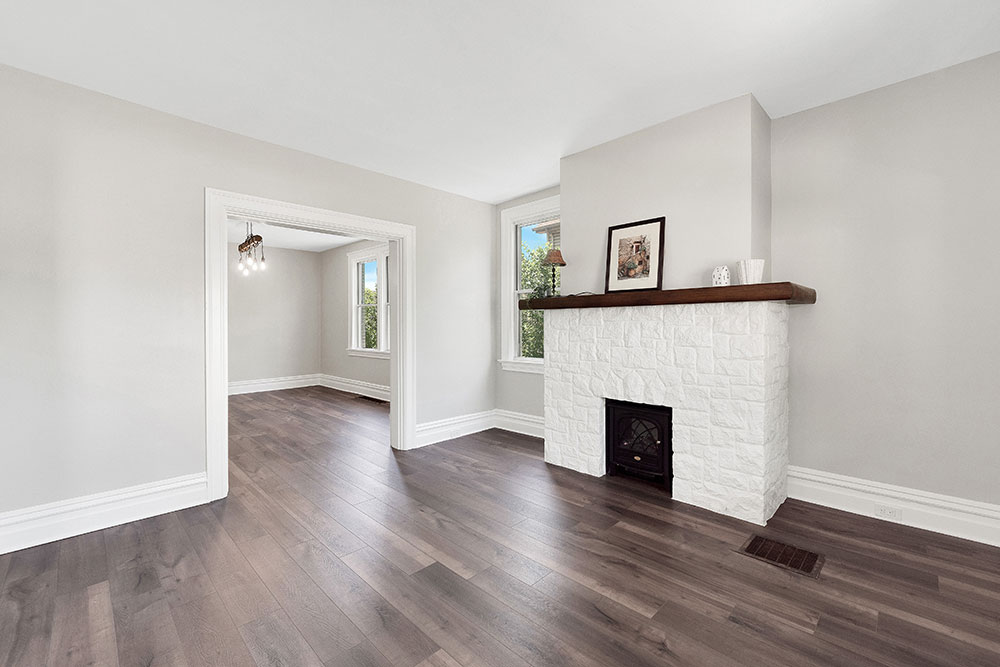 A spacious living room features an original fireplace with a black decorative insert. The stone façade received a nice whitewash, leaving the original woodwork mantel to shine. The room opens up to the dining room, where an original bookcase with glass doors creates a nice storage niche. 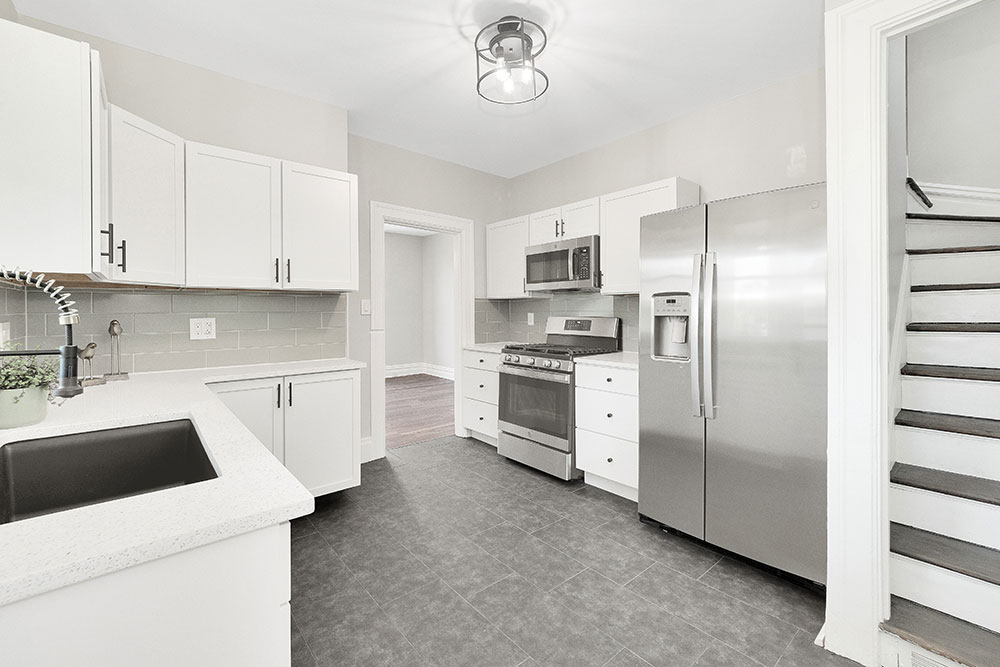 The entire house has been upgraded with decorative industrial lighting, creating warmth and more character throughout. This carries into the kitchen, which was renovated down to the studs and includes white shaker cabinets and quartz countertop. The new stainless-steel appliance package includes a gas range, over-the-counter microwave, dishwasher and a side-by-side refrigerator. A second, back staircase was left in place.

“We had differing opinions, and it almost became a pantry, but we ultimately agreed it was just too cool, so we left it,” Drew says. 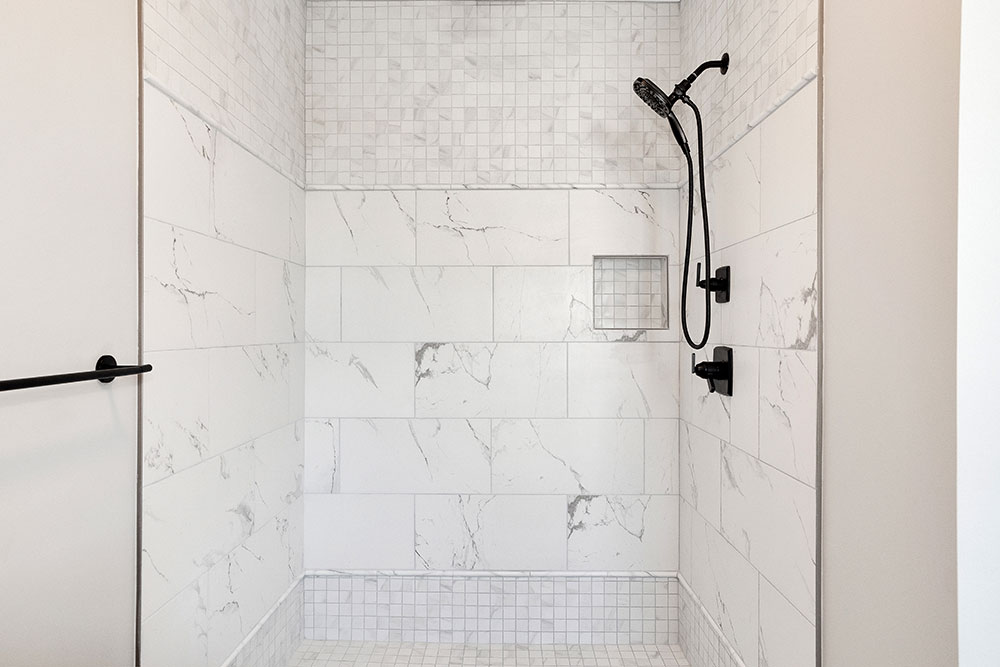 Upstairs, the primary bedroom hid a surprise that was turned into another asset.

“There was a sitting room attached to the bedroom,” Drew says. “ It just made sense to turn it into an ensuite bath. We had to run the plumbing chase, but it was worth it.”

It was a good call; the new bathroom features a 72-inch double vanity, a walk-in shower and all-black bath fixtures. Underfoot, gray and white Encaustic tile lay in a lovely pattern that gives some pizzazz to the set-up

The two other bedrooms are good sizes and include the original closets, plus industrial-style ceiling fans. They are serviced by a hallway bathroom that has a single vanity and a tub/shower combination. 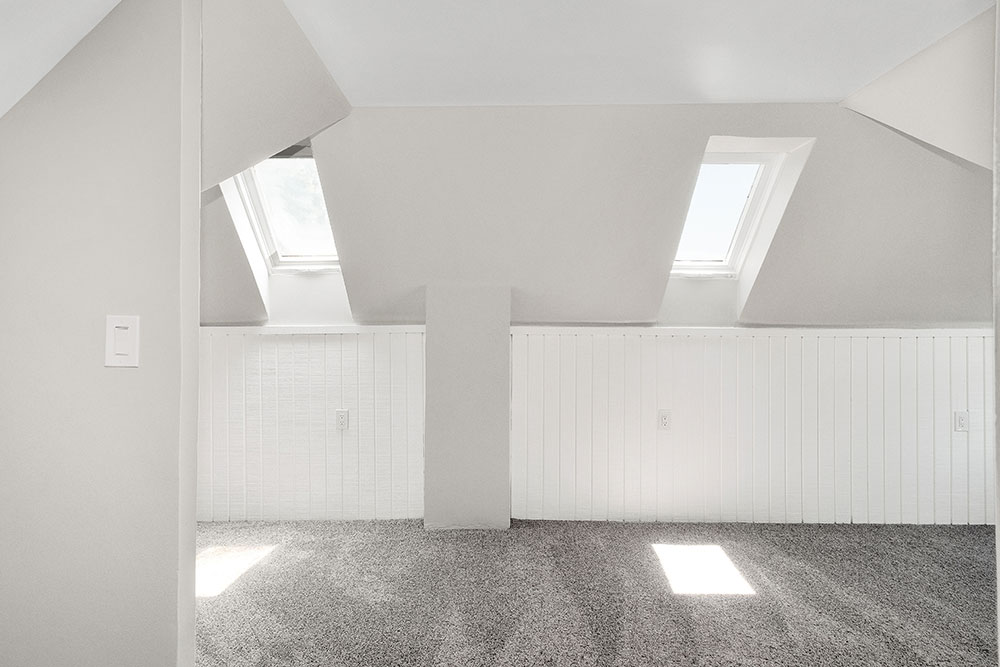 A nice surprise awaits on the third floor, where the fourth bedroom features skylights installed by a previous owner.

Another pleasant surprise is in the walk-out basement.

“It has two cold cellars and is amazing,” Drew says. “ It is completely dry. It’s ready to be further finished.”

The walls and floors have been painted white. There is a laundry area and, where there was once a Pittsburgh potty, a new bathroom with a walk-out shower has been installed.

“We made a walk-out shower that can double as a dog wash if you need it,” Drew says. “You can bring them right through the basement door and clean them up before you head upstairs.” 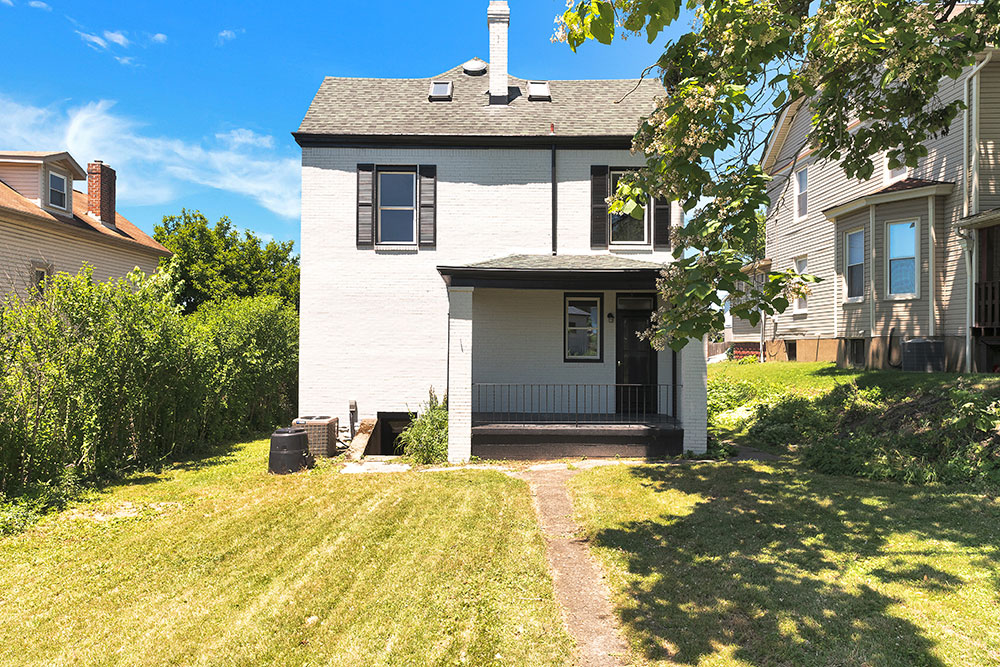 Mechanically, the home has received everything it needs to be worry-free for years, including a new roof, all-new HVAC system, plumbing and a new water heater. The sewer line going out to the street has even been relined. The windows had been previously replaced and still have a lot of life in them. In the rear yard is a standalone, two-car garage.

Because of the coronavirus pandemic, remodeling a house quickly was not really in the cards, according to Drew and Perri.

“This one took a year, but we had a strong focus on quality,” Drew says. “We wanted to deliver a nice house. We are invested in this community, and you will see us around Crafton. We love it here.”

About: Crafton, Pa. (craftonborough.com)
Population: 5,770
Planes, Trains & Automobiles: A 20-minute commute to the airport.
Schools: Carlynton School District
Neighborhoods: Full of rich housing stock rooted in history, Crafton was named after James S. Craft, an attorney who was originally granted the land. His son, Charles, sold parcels of the land, which was incorporated into a borough in 1892.