Flicks: Monroeville Mall Gets a Cinema

Now you can catch a film in the spot where "Dawn of the Dead" was shot. 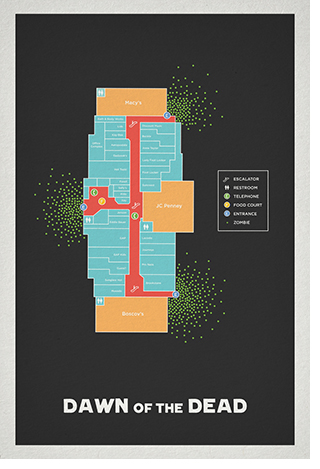 Multiplexes weren’t always known for their amenities. The multiscreen movie houses were once defined by their attempts to cram a high number of screens into a single building — not by consideration for movie lovers.

In the 21st century, that changed. As the original multiplexes have aged, newer theaters operate with an eye toward improved experience and new technology. The folks at Cinemark, which operates more than 500 theaters in the United States and Latin America, follow one guiding philosophy: If they’re going to open a theater, they’re going to give it all they’ve got.

Cinemark Monroeville Mall and XD opened in early November in the space formerly occupied by J.C. Penney. The 12-screen cinema provides occasion for a bit of local film history: For the first time, zombie aficionados could see George A. Romero’s “Dawn of the Dead” in the spot where the movie was made (the former department store was used extensively in the film).

In appearance and operation, the theater has a lot in common with many multiplexes of recent vintage. It excels, however, in presentation. In addition to all-digital sound and projection, the projectors are state-of-the-art with respect to 3-D viewing, which is noticeably crisper and brighter than pictures at many other movie houses.

This is doubly so at Cinemark’s single XD screen. XD, or “Extreme Digital Cinema,” is the chain’s answer to IMAX, specially formatted for 3-D blockbusters. I received a preview of the XD capabilities, and I can truly say it’s the clearest presentation of 3-D I’ve seen — not at all dim or muddy.

For Monroeville, which hasn’t had a movie house in several years, it’s a fine example of how far multiplexes have come in recent times. Plus, it’s cool to be able to turn to your friend and say, “You know, this is where they killed those zombies.”

Want to grab dinner before or after your film? Winghart’s Burger & Whiskey Bar opened a Monroeville Mall location in the fall. The new place offers an expanded menu, with giant pierogies, wings and a longer list of sandwiches in addition to the brand’s signature burgers and pizzas — as well as a formidable, seasonally focused beer list and a fine whiskey selection. The new Winghart’s sacrifices some of the charm from the Market Square and South Side locations in favor of sports-bar trappings; truth be told, the location had some service hiccups at last check. But food this good in a mall — typically chain-restaurant territory — is more than welcome.

This article appears in the January 2014 issue of Pittsburgh Magazine.
Categories: Arts & Entertainment, Things To Do