Flicks: Learning More (but Not Everything) About ‘The Residents’

The Residents’ multimedia output is as fascinating as it is dissonant. 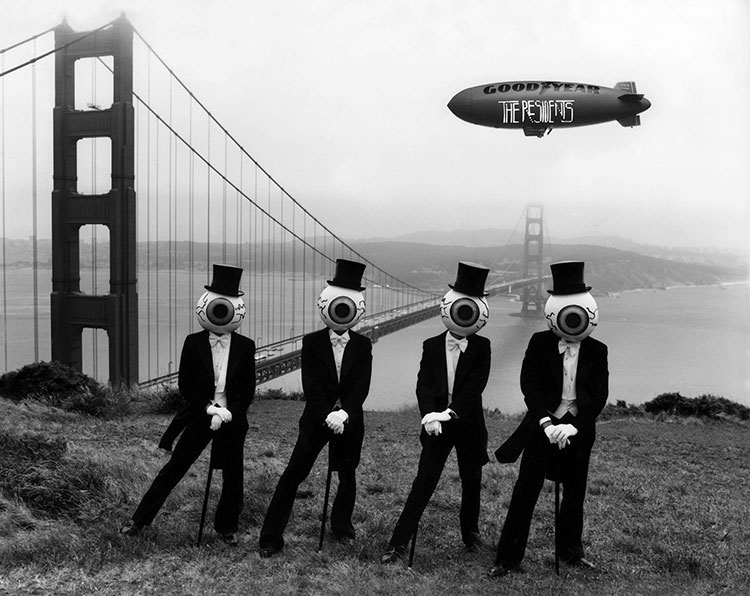 For more than 40 years, the avant-garde performers known as The Residents have been recording, performing and creating in anonymity. Despite decades of cult following and well-documented innovations in music video during the 1980s and computer entertainment in the ’90s, The Residents have kept their identity a secret.

During the group’s bizarre concert tours, its members most frequently take the stage in tuxedos, top hats and oversized eyeball helmets. If it all sounds bizarre … well, it is. Uncanny might be a better word; The Residents’ multimedia output is as fascinating as it is dissonant. A 2015 documentary, Theory of Obscurity, that explores the group with more access than ever before, will be shown March 5 at the Hollywood Theater (thehollywooddormont.org). The film was selected as part of the Hollywood’s guest-programmer series by cartoonist and Pittsburgh Magazine contributing illustrator Wayno.

“I have listened to the music of The Residents for as long as [it has] been generally available,” Wayno says. “I think it’s a really interesting approach to music and commenting on celebrity … this idea of separating personality and celebrity from the art.” Director Don Hardy followed the band in 2013 during its 40th anniversary world tour and interviewed high-profile fans, including “The Simpsons” creator Matt Groening and Primus frontman Les Claypool. Wayno became a fan in a very pre-internet manner: He spotted a bizarre album cover at a record convention.

“The visuals caught me first,” he says. “The [cover for the] album ‘Meet the Residents’ was a horribly defaced version of the ‘Meet the Beatles’ cover … Since I was a kid, I was always so into music and always looking for something really different and odd. And that really fit the bill.” Wayno will introduce the film and offer original, limited-edition silkscreen movie posters for sale. Advance tickets to the screening are $8.

Named for the dens where kids hunker down when it’s too dark or cold to play outside, Rec Room: Winter Games is an indoor play area for adults. The twice-monthly event (March 6 and 20) at Spirit in Lawrenceville is an afternoon and evening of drinks, music and games at a time of year when most people need the promise of all three to consider leaving home. Created by Weather Permitting (weatherpermittingpgh.com) and City of Play (cityofplay.org) — two groups dedicated to combatting the workaholism epidemic afflicting our society — the Rec Rooms feature indoor lawn games such as the Nordic bowling-billiards-horseshoes hybrid Molkky and the deluxe beer pong variant Bucket Pong. It also includes physical-digital games such as Door, where you work with a partner to discover and draw each level in a pitch-black video game, and Searchlight, where players work to steal blocks without getting caught in the light. The $10 event is all-ages but geared toward adults.