For the first time, an Opry performance has been captured for release as a theatrical feature film, allowing you to view the show from afar. 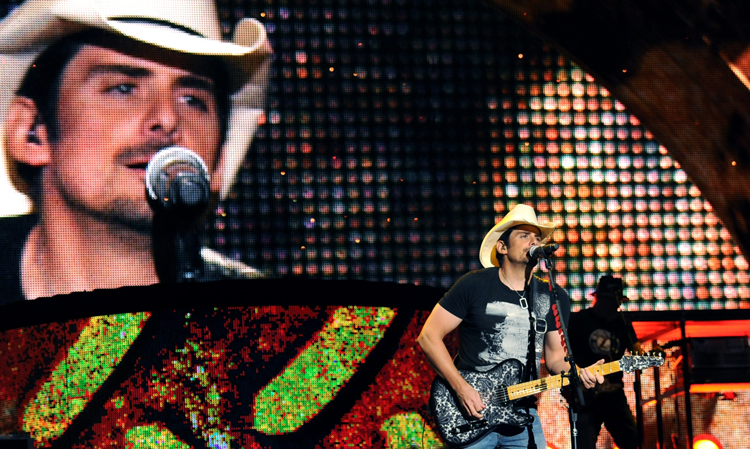 There are certain musical experiences that invite audiences to throw individual taste out the window. A traveler visiting the French Quarter in New Orleans may not know the first thing about jazz; the horn sections will be no less infectious. Most people never will buy an official cast recording on iTunes; you’d still be a fool to schedule a trip to New York without springing for Broadway tickets. And your radio dial might never land on a country station, but if you’re in Nashville, you should visit the Grand Ole Opry.

The Opry, which celebrated its 90th birthday in November, is the longest-running radio program in history. Its role in popularizing up-and-coming country stars is as vital today as it was when the likes of Patsy Cline and Loretta Lynn were introduced to the nation on the Opry’s stage. Performances usually are held at the Grand Ole Opry House outside of Nashville proper, though the show returns to its longtime, downtown home, the Ryman Auditorium, each winter. An in-person trip to the Opry will present audiences with a mixture of country legends, rising stars and lauded, under-the-radar musicians. Every performance has a different lineup, creating the potential for a once-in-a-lifetime show each night.

For the first time, an Opry performance has been captured for release as a theatrical feature film, allowing you to view the show from afar. “American Saturday Night: Live from the Grand Ole Opry” features performances recorded earlier this year from present-day country megastars Brad Paisley, Blake Shelton, Darius Rucker, The Band Perry and Brett Eldredge. “American Saturday Night” is being rolled out in an extremely limited release, so country fans will have only a few chances to see the show in Pittsburgh. The film screens at select times from Dec. 4-10 at the Carmike 10 in South Hills Village in Bethel Park; tickets are $12.50. [carmike.com, oprymovie.com]

Earlier this year, Marriott asked each location in its Renaissance Hotel chain to host a celebration particular to its city. In an inspired move, the Pittsburgh branch revived Heaven, a former disco club from the 1980s, when the hotel was still known as the Fulton Building. The one-night event in June brought more than 900 well-dressed people to the hotel and convinced the Renaissance [107 6th St., downtown; renaissancepittsburghpa.com] to hold Halloween and New Year’s Eve editions.

As did the two previous iterations of Heaven, the New Year’s Eve version will consist of a long night of dancing under a mirrored disco ball salvaged from the original incarnation of Heaven. And, of course, there will be more open-shirt collars, imposing shoulder pads and teased hair than a 1979 World Series afterparty. For those who want to party until they drop, the hotel also is offering dinner and overnight packages.