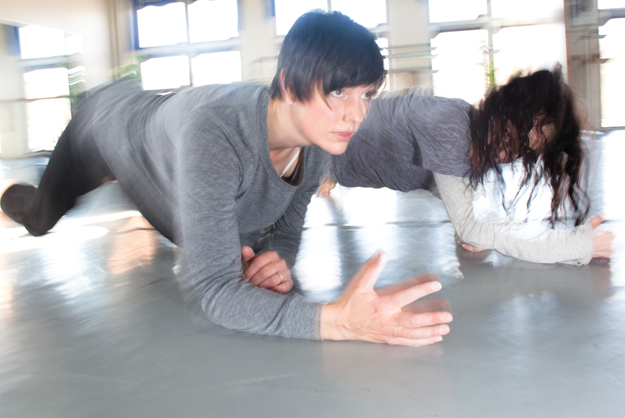 “There isn’t much dance improvisation presented in Pittsburgh,” says Gia T. Cacalano, co-founder of the collective that embraces musicians, filmmakers, poets, dancers and visual artists. For the lithe, dark-haired Highland Park resident who teaches at the University of Pittsburgh, improvisation provides a vehicle for edgy creativity while releasing the body from routine patterns. “I never repeat the same pieces — even for two performances of the same show,” she says.

The former New Yorker moved here in 2002 and immersed herself in solo pursuits, working closely with musicians and making advancements in Pittsburgh’s art and music communities. “I love New York, but in Pittsburgh, I have the ability to find [studio] space and the luxury to make my own work. More recently, I’ve wanted to do more collaborative engagements,” says Cacalano, who gravitates toward abstract venues like the Mattress Factory, SPACE and Future Tenant.

In 2010, she and jazz musician Jeff Berman co-founded Gia T. Presents, now in residence at the SPACE/Wood Street Galleries, where it performs biannually. Last year, the Galleries announced the U.S. premiere of in transit, a video installation of works by award-winning Norwegian artist HC Gilje. Gilje’s single video-channel piece about a mysterious environment of shifting and ebbing light inspired Cacalano’s BLINK, slated to premiere this month. Although the two haven’t met, Cacalano aims to “connect in collaborative spirit with what the artist has made,” while wrapping the 90-minute performance around her conceptualization of “waiting and falling.”

She chooses classically trained musicians and confident movers who are serious about improvisation, practice independently and have command of traditional dance techniques. “You can’t improvise unless you have all that in your bag,” she says.

“My goal is to present high-quality work,” Cacalano says. “Improv is tricky business. There is a lot of organization and dialogue — we may begin with movement phrases, though that choreography becomes unrecognizable in the end.”

Stifel, a seasoned improviser, notes: “You have to constantly think” while improvising. “Gia is incredibly strong and can do virtuosic movements,” she says. “Improv brings together different body types; part of the process is developing vocabulary and understanding how we [each] make choices.”

Cacalano’s creative process and inspiration varies by project, and is shaped by the talents and skills each collaborator contributes. “I like to watch my dancers when they think I’m not watching. And I’ll say, ‘Remember when you were there and did that? Well, put that here.’ And I love mistakes — if someone fell over or walked in unexpectedly, I’ll keep it. It’s so organic,” she says.

At the age of 15, Cacalano took a recreational jazz dance class, which led her to her avocation. The artist, trained in ballet and modern dance, later discovered dance improvisation via Butoh. The sculptural Japanese movement philosophy provided an outlet for her technique and opportunities to innovate movement. She adopted a “work will create itself” mindset as well as a penchant for universal themes — but her taskmaster perfectionism abhors sloppiness. “You have to be sure and clear about what you are doing, though choice and chance do come into play,” she says.

“We, as dancers, listen,” she says. “We listen to the space. We listen to the music. Our eyes have to be open.” And as improvisers, Cacalano and company — by choice or chance — take a deep breath and blink.