Closer Joel Hanrahan found success with the Pirates — and he’s hungry for more. 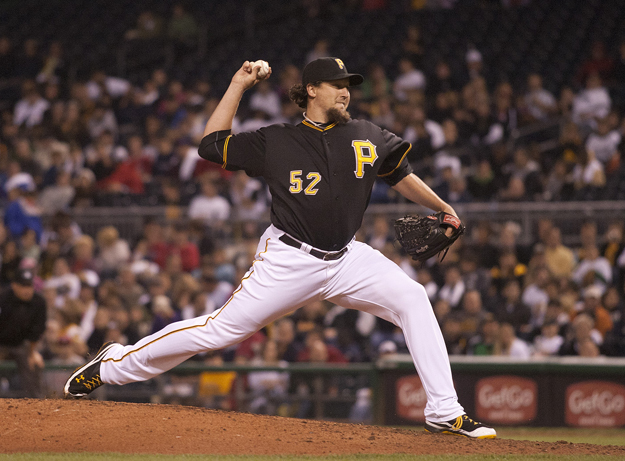 In fact, even when haters try to goad the pitcher into a confrontation with some choice words, Hanrahan laughs it off. “I enjoy it when people tell me I suck,” he jokes. “I don’t talk back. I just say, ‘Thanks — you’re my No. 1 fan.’”

The 30-year-old Des Moines native wasn’t always so confident. “When I was with the [Washington] Nationals, I was going to the park every day wondering whether I was going to get released.” That’s certainly a far cry from his current role as the anchor of the Pirates bullpen, where he’s emerged as one of the game’s most intimidating closers.

The Los Angeles Dodgers drafted Hanrahan in 2000. He toiled in the L.A. farm system until 2006 and decided to test free agency rather than stick with a club that didn’t have big plans for him. He was quickly picked up by the Nationals, who took long looks at him in a number of roles over the next two seasons. But, like the Dodgers, Washington just didn’t seem like they were all-in on Hanrahan.

However, when the Pirates traded for him early in the 2009 season, Hanrahan knew it was a now-or-never opportunity. “I changed my mindset: ‘Just go out there and relax,’” he says. It’s all part of the elusive zen of baseball. “When you release the ball, it’s out of your hands.”

His new club was willing to show patience. “[Former Manager John] Russell and [General Manager Neal] Huntington told me they weren’t going to put me in high-pressure situations to start off,” he says. Their immediate expectation? “Go out there with the mindset of getting a couple people out.”

As a reliever in 2009 and 2010, those outs started to pile up. Eventually, the bullpen phone started ringing during save situations. And opposing batters started to fear the flame-thrower’s fastball, which inched close to 100 miles per hour. For the first half of the 2011 season, the surging Pirates delivered Hanrahan lead after lead, allowing him to dutifully obliterate the last threat and seal up a number of wins Pittsburgh hadn’t seen in two decades. They flirted with first place and remained solidly in contention for about two-thirds of the season. Then … well, the young team started to waver under the pressure. “We learned it’s not a 100-game season; it’s a 162-game season,” Hanrahan reflects. “And teams will start to figure you out and adjust to you.”

Perhaps, though, that’s just what the Pirates needed — a taste of how things could be, while also learning some lessons along the way. “A lot of the guys had never really won a whole lot, and we gained that experience.” Most importantly, with success comes desire. “Guys became hungrier after last year.”

Pirates pitching coach Ray Searage sees that passion in Hanrahan and knows that he’s a closer who can help the team harness its potential. “He’s very disciplined; he has a gritty exterior,” Searage says. “But he cares deeply about his team and his teammates. “I’m a firm believer [that], in order to be a mature pitcher, you also have to be a mature person. And that’s one thing that Joel does bring to the table.”

Searage cites a need to utilize a slider more often as the main change for Hanrahan this year. For the most part, though, there’s no need to improve on success. In addition to being named to his first All-Star Game in 2011 — “It was the most nervous I’ve ever been on a baseball field,” he says — he finished the season with an intimidating 1.83 ERA, ranking sixth in the National League with 40 saves. There’s no reason to expect anything but more of the same in 2012 —  batter after batter watching that blistering fastball rocket toward the catcher’s mitt.

Yet for all the fire, for all the intensity in Hanrahan’s eyes when he’s preparing to ring up another hapless slugger, he’s a man of calm and perspective. He doesn’t take himself too seriously. This is a guy who’s as eager to talk about his awe-inspiring goatee — he didn’t shave it from Spring Training on last year, and he is inclined to try that again for 2012 —  as he is to talk about his fastball. This is the same man who handed the shoes off his feet to a dedicated young fan after the final out of 2011 at PNC Park.

A man who knows that, of course, “at the end of the day, you’re still playing a kid’s game.” Play like a kid. Throw like a cannon. That might be the zen of Hanrahan.

This article appears in the April 2012 issue of Pittsburgh Magazine.
Categories: From the Magazine, Hot Reads