Is your soul crushed? Does your heart feel like it was impaled by a fleur-de-lis? We have your medicine.

Welcome to the first real hangover of the 2010 Steelers season. When your alarm clock went off on Monday morning, you sat up in bed and gazed out the window with the glum, dead-eyed 10,000-mile-stare typically fashioned by actors in monochromatic Zoloft commercials. 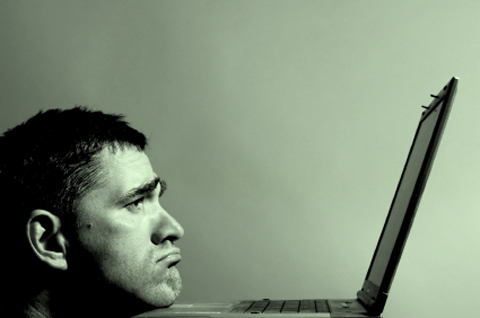 If you have Steeler-hating friends, your inbox is going
to look like the warn-torn streets of Mogadishu this week.
Let them have their fun.

But you certainly took the loss a lot harder than Ben Roethlisberger, who was positively giggly after Sunday night’s 20-10 slugfest in N’awleans. 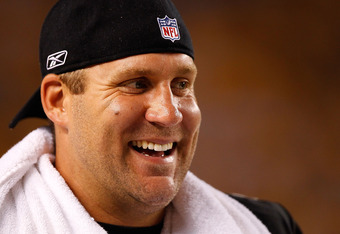 “He’s amazing,” Roethlisberger glowed in the post-game presser. He wasn’t talking about Saints quarterback Drew Brees or head coach Sean Payton, who out-smarted Mike Tomlin for four whole quarters. Big Ben was talking about the very player who fumbled away the Steelers’ only real chance at tying the game: the usually dependable Heath Miller.

“He’s the best tight end in the game,” Roethlisberger said. “Him fumbling there is about as freaky as Jerome Bettis fumbling in Indianapolis on the goal line.”

Benjamin Roethlisberger: Voice of Reason? Has it really come to this?

Say what you want about Big Ben, but his post-game demeanor was impressive, even inspiring. None of his pre-Milledgeville, mealy-mouthed hallmarks were on display: the aloof shoe-gazing, shaggy hair and baggy hoodie were gone, replaced with a pinstriped blazer and a little something your grandfather calls gumption.

Roethlisberger looked reporters in the eye. He stayed positive and exuded confidence despite suffering his first setback since returning from suspension. He wore a suit, for crying out loud. The guy who was universally tried and convicted of being “guilty of stupidity” just six months ago showed so much constitution I thought I was watching a Christine O’Donnell campaign ad.

Genuine or not, I like this new guy. For the first time, Roethlisberger actually looks comfortable in his own skin and not like some overgrown teenager faking a swagger and affecting bizarre ebonical slang in order to impress the cool kids.

We’re now so comfortably numb in our relationship with athletes that sports has become a purely escapist transaction.

In the age of sadist Internet snark, Photoshop nihilism and all-consuming cynicism, everyone sucks. Every team is evil, cheating or worse.

Peyton Manning is a corporate shill.

Tom Brady is the mean big brother you never had who won’t let you listen to his INXS records.

Even Tony Dungy, the Holy See of the National Football League, is hammered online for being a self-important moral evangelist.

And on and on. 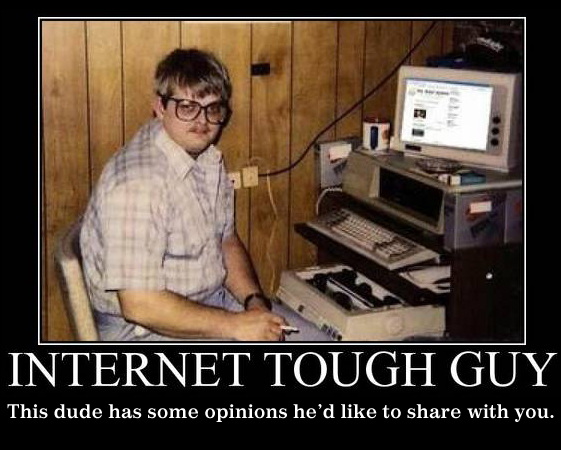 If you can be Photoshopped, or tumblr’ed or YouTubed, you can be torn apart.

In 2010, can a public figure actually change for the better?

I’m not sure if Steelers Nation is entirely ready to embrace their quarterback with full hearts, but Sunday night was a baby step. Sometimes, you need to get knocked down to be ready to improve. No one knows that more than Ben Roethlisberger.

Hangover cure #2: Recognize that the Steelers will survive without Aaron Smith.

Thirty yards. That’s the grand total the Saints were able to scrounge up on the ground. While they were missing their top two running backs due to injury, the Steelers’ front three performed remarkably well in the absence of Aaron Smith and Brett Keisel.

Ziggy Hood, recently discovered alive and well after being identified on the back of a milk carton, tackled a dude for a loss using only his noggin’ (his arms were tied up by a blocker). The NFL is currently investigating the legality of helmet-to-soul hits.

More positives: Cornerback Ike Taylor finally made an interception while riding on the back of a flying pig like it was his pudgy Valkyrie. 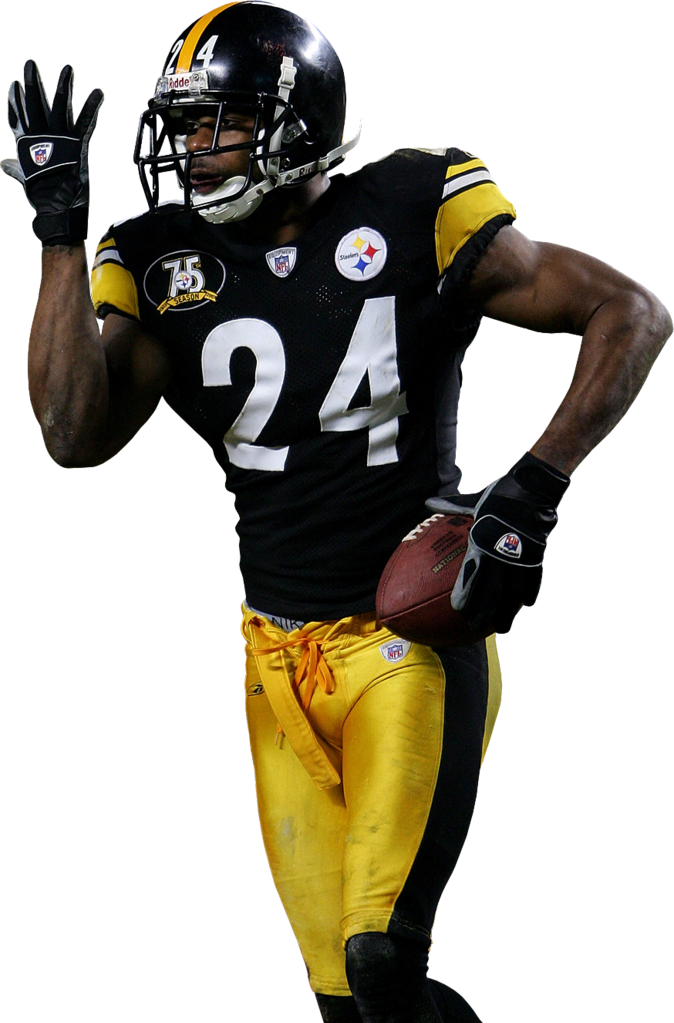 Hangover cure #3: Acknowledge that Troy Polamalu is heating up.

Troy Polamalu may have suffered second-degree burns when Brees fooled him on Robert Meachum’s 50-yard reception in the 4th quarter, but it’s good to see Troy flying around the field again. His five solo tackles tied his season-high (he also had five last week against the Dolphins).

If Lance Moore had dropped his crucial TD catch after taking a perfectly-timed shot from Polamalu, the Steelers might be 6-1, and we’d be talking about the Flyin’ Hawaiian’s return to form instead of his lapse in coverage.

Plus, you have to love it anytime Troy gets into a barking match with an opposing player. He’s starting to show the intensity that was missing in the first five games. 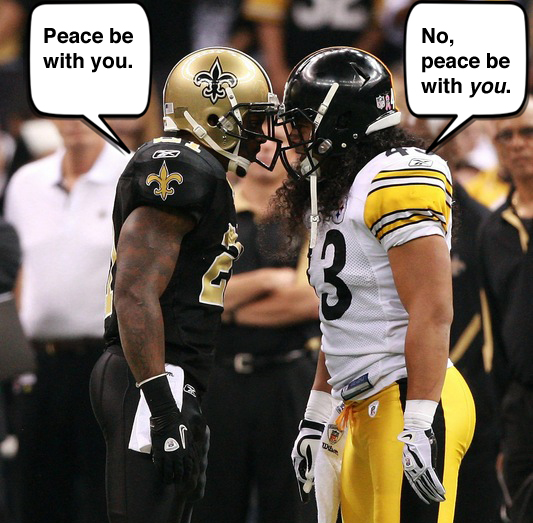 Hangover cure #4: Realize that Rashard Mendenhall had a touchdown stolen from him.

Fact: The Steelers never should have been stopped on the goal line stand in the first half. Mendenhall clearly got the ball over the plane on the second carry. 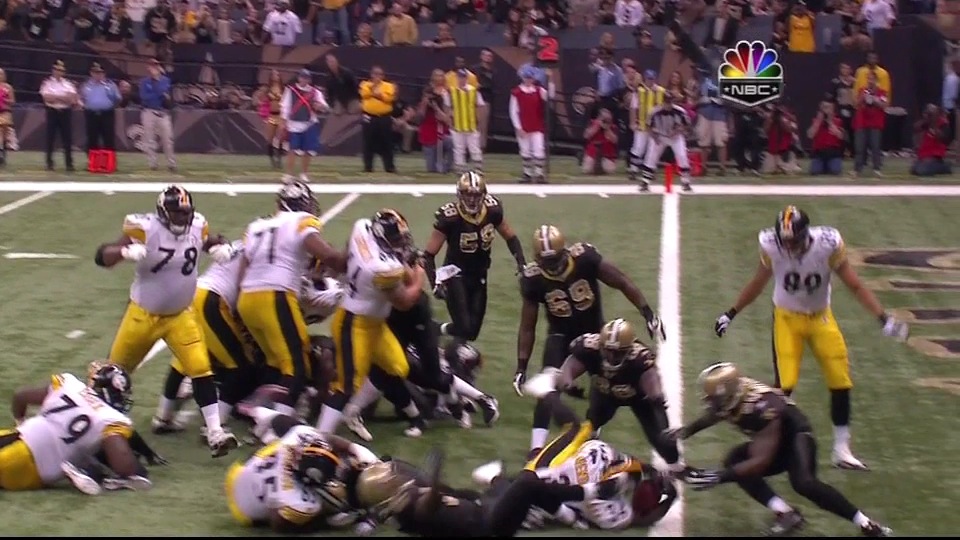 The responsibility falls solely on the shoulders of the coaching staff for neglecting to challenge the play. There’s no point/counter-point here. The Steelers were out-coached.

In having the luxury of Roethlisberger once more, the Steelers got away from the fundamentals that made the 4-1 miracle: Field position and patience. The decision to go for it on 4th-and-4 with with an entire quarter left to play was dumbfounding. The gamble put all the pressure on the Steelers, instead of putting the onus on the Saints’ offense to move the chains against a swarming defense with their backs to the endzone.

Want to know how the defense feels about a call like that? When the Houston Texans made a similar decision in the first quarter against the Indianapolis Colts last night, Steelers linebacker LaMarr Woodley said on Twitter, "They should have punted. You can’t give a Peyton a short field like that."

Tomlin’s strategy was faultless for the first six games, but he needs to reign in offensive coordinator Bruce Arians once more. Many fans are chastising Arians for not letting Roethlisberger take the game over, but they are ignoring the real reason why the Steelers lost: They were routinely outnumbered at the line of scrimmage. The Saints kept running their “Casino Blitzes” (they go “all-in” with 7-8 rushers) while Arians refused to keep extra men on the line to block.

On the Steelers’ only home-run play of the game, the offense lined up in the much-bereaved I-formation with seven blockers stacked on the line, opening the hole for Mendenhall’s 38-yard scamper. 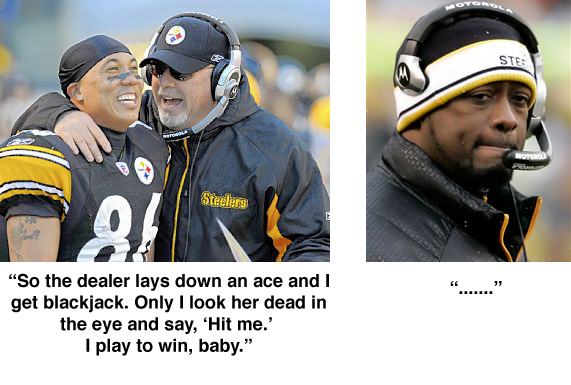 Hangover cure #5: Take solace in the fact that the Steelers play the hapless Bengals next week.

Now is not the time for panic. While you may have sat at work all day mimicking The Heath Miller Sad Face, the Steelers lost to one of the league’s few well-coached, talented teams. Next week, the sledding gets easier in Cincinnati.

In August, did you really think the Steelers would be 5-2 when the leaves started to fall? With all the drama unfolding in NFL locker rooms this season, the Steelers seem unexpectedly well-adjusted and close-knit. I can’t believe I’m saying this, but Steelers Nation would be wise to take after Mr. Roethlisberger. Think positive.