Thousands have tweeted the hashtag #steelersnation for a chance to see their twitter ID be the driving force behind a computer-driven mechanical whirl of a Terrible Towel. 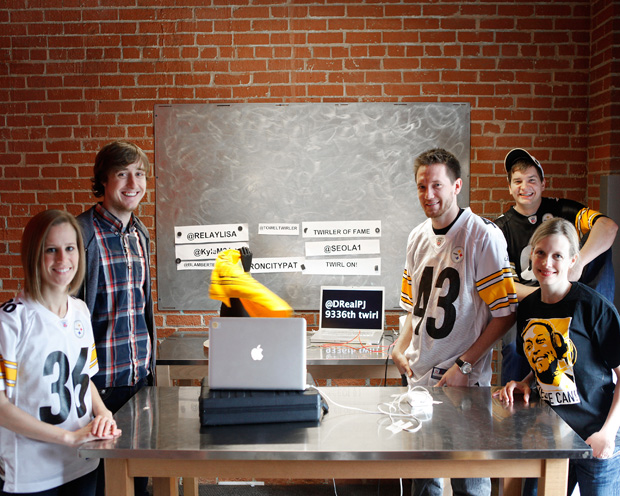 It has taken Twitter and Steeler Nation by storm.

Thousands of people have tweeted the hashtag #steelersnation for a chance to see their twitter ID be the driving force behind a computer-driven mechanical whirl of a Terrible Towel (twerribletowel.com).

Initially, the towel, clutched by a wooden hand rigged to an upside down flowerpot, twirled sporadically. Now, as news of the site has spread via Twitter, the local news and even the national media outlets, it is in constant motion, having surpassed 10,000 twirls.

As I watched my @JanePitt tweet send the towel twirling, I knew I must learn more about the team behind the Twerrible Towel. Who are they, how did they do this, why did they do this and what happens after the Super Bowl?

They are Ben Eckerson, Jenny Nicholson, Stevie Archer, Brett Buddin and Scott Gaston, all employees of McKinney (mckinney.com), an advertising agency headquartered in Durham, N.C. Here’s what they had to say.

1. Explain to me how a team of co-workers comes up with this idea. What was the original spark that lit this Twerrible Towel fire?

We’re Steelers fans that love technology. At McKinney, we’re encouraged to spend 10 percent of our time innovating. We just started talking about a cool way to support the team that we could pull off really quickly. The idea of a never-ending twirling Terrible Towel came up, and then we decided to link it to Twitter to give all of Steeler Nation a chance to participate.

2. Once you knew you wanted to do this, to create this, how long did it take to put it together? Any miscues or mistakes?

From the initial idea to launch, it took us 11 days. We came up with the idea the Friday before the AFC Championship game, so we spent the entire weekend thinking some hardcore victory thoughts. Then we started the actual construction the Monday after the Steelers won.

Brett Buddin, computer genius, worked his coding magic, and Scott Gaston, a.k.a. The Young Professional, made the site look all fancy-like.

The hardest part was finding a motor powerful enough to properly twirl the Towel. We destroyed a small desk fan in our quest for perfection. But Steeler Nation wouldn’t put up with lame twirls, so it had to be done.

But the real MVP was Ben Eckerson’s dad, Beanie Eckerson, who gave up his Sunday afternoon and fan motor to rig up the twirling contraption. 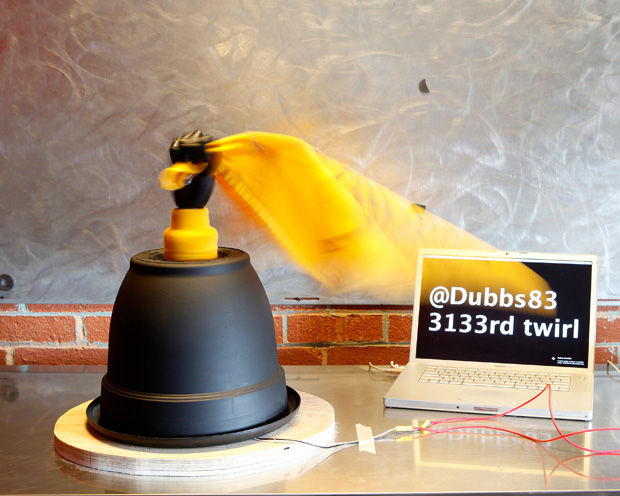 The Twerrible Towel in action.

3. Do you have to kill me if you tell me this? Where is the Twerrible Towel? Your kitchen? Your bathroom? Your office? A secret bunker?

The Twerrible Towel is in a highly protected hidden chamber at McKinney that some might call a “printer room.” Very sophisticated.

4. The news has spread like wildfire. Deadspin. Coach Tomlin. At first the towel was spinning sporadically, now it is in perpetual motion. Was it hard for you to get the word out about this?

Before we can answer that question, we have to stop for a moment and just savor the fact that COACH TOMLIN PUT US ON HIS FACEBOOK PAGE. That is more than we ever could have hoped for.

We purposely used hashtags that Steelers fans were already putting in their tweets because we knew we didn’t have enough time to trend a hashtag from scratch. Then we tweeted back to fans every time they inadvertently twirled the towel, letting them know we were out there. We also tweeted to Steelers blogs, players and fans hoping they would appreciate our efforts.

5. This is a weird question, but where did you get the hand that’s holding the towel? And what are your plans for the towel after the Super Bowl? That counts as one question. I’m allowed to cheat.

It’s a weird question about a weird hand. The hand is actually a wooden artist’s model that we picked up at Barnes & Noble. We spray-painted it black because, well, why not.

[After the Super Bowl] Ben isn’t giving up his towel. It’s going right back to its rightful place in his Steelers room as soon as that Lombardi trophy is in the hands of coach Mike Tomlin.

However, if anybody wants an old fan motor and a creepy hand, those are up for grabs.