Hard to believe, but this year marks Sally Wiggin’s 30th year as a fixture on Pittsburgh television via her work as a reporter and anchor with WTAE-TV.

Sally can easily be described as a local icon—one of the few non-sports celebrities in the ‘Burgh that can be considered a household name, and a female one at that. I’m trying to think of others and I’m only able to come up with Sophie Masloff.

Since revealing my identity last August, I’ve had the opportunity to meet Sally on several occasions and can verify that she is a true Pittsburgher—unaffected, genuinely kind, humble, and living her life with a proper perspective of the grand scheme of things.

Before asking her the following questions, I did some research and found many interesting things about her I previously didn’t know:

That’s not a question I asked her.

Here’s what I did ask. We talk elephants, pigeons, Russell, and yes, the Buccos of Suckitude.

1. I find this amazing. This is your 30th year at WTAE! First, you don’t look it, and second, in those 30 years has there been any one story that touched you more than any other? Stuck with you all this time? Changed you permanently in some way?
"9/11, of course. Because it seemed so close, so personal, with United Flight 93. I was working late shift back then, and I was bringing Krispy Kreme Donuts to the station (it was the opening). Otherwise, I would not have been there when the Towers collapsed. Then, someone screamed in the newsroom that the scanners indicated a plane had crashed in Somerset County, and I jumped on the air. I have to admit, I was shaking, and I still shake, and weep, when I think of all the loss, and all the stories of heroism. It was a terrible rite of passage for all of us.

BUT—personally, as a frustrated zoologist, it was meeting Ian Douglas-Hamilton, the famed elephant expert. It was the mid ’90s and he 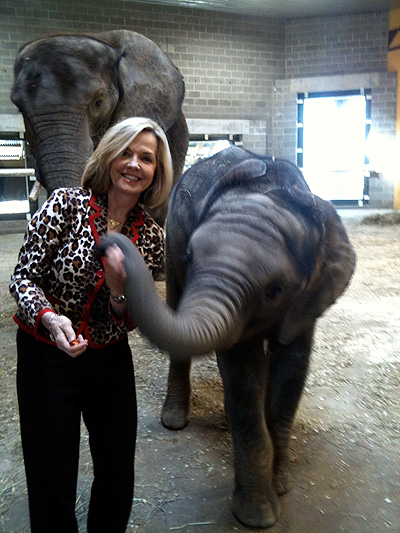 was speaking at the Zoo. I came in on the weekend and asked for a camera to cover him. It was the first time I had gone into the exhibit with the African elephants, and it changed my life. Touching them, talking to him–it inspired me, and a year later, I went to Botswana (to see some of the largest herds of elephants on the African continent), because of him. I am an elephant freak–but, also, a whale freak, tiger freak, African painted dog freak, polar bear freak, etc."

2. I am really awesome at saying embarrassing things, and I’m curious, what’s the most embarrassing thing you’ve ever said on air?
"My most embarrassing moment, is what I was trying to say. I had a severe allergic reaction to an antibiotic I had never taken before, and about 15 minutes before air, my lips began to swell, I had white sores in my mouth, and I was beginning to drool. I was the weekend anchor then, probably about 1985, and I was anchoring by myself. After the show, the news director called and ordered me not to go back on the air at 11 pm. I sounded like I was talking with food in my mouth. I had to go to the hospital."

3. Pro-pigeon or anti-pigeon?
"After reading my response about elephants, you would guess I am pro-pigeon."

4. Who is the genuinely nicest famous actor/actress/politician you’ve ever met?
"Russell Crowe. I know, I know. He has a reputation. But, next to Viggo, whom I did not get to meet when he was here, Russell is my favorite actor. Most of these people never give local TV folks interviews when they are shooting in the area, but he did. He was charming, intelligent, and even said, ‘Cheerio, Love.’ Oh my goodness. He loved the city, the architecture, the Steelers. And he talked about how much he missed his family! I was even more smitten when I walked away."

5. What year do you believe will be the next time the Pirates win the World Series and please, stop laughing like that.
"Hope springs eternal! 2020! Hope I live until then."

This article appears in the May 2010 issue of PittGirl.
Categories: PittGirl