I learned of her through Twitter when I tweeted a picture of her and her husband because I didn’t understand a sign he was holding. Twitter responded with, “Hey! That’s the Knitting Lady next to him!” and I was all, “The Knitting Lady?!” 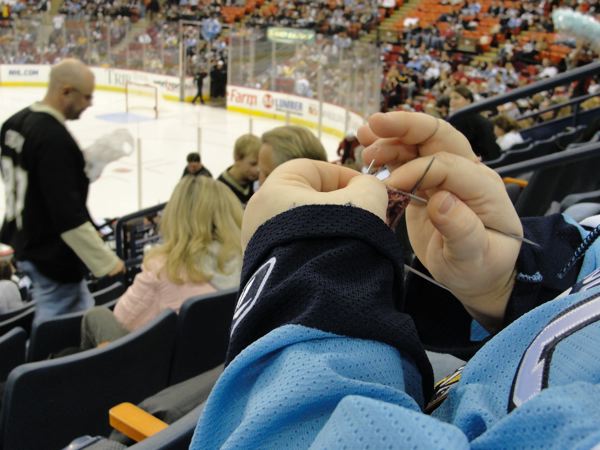 I hunted around the Internet to find that indeed, she had become well known in hockey circles, with commentary ranging from “Hey, it’s her ticket,” to basically, and I’m paraphrasing here, “She’s crazy.”

I decided that I must get her story in order to understand WHY she’s knitting while attending games. Part of me wanted to know, “IS she crazy?”

The verdict? Not even a little bit crazy. She’s an extremely likable, down to earth, completely sane woman, whose passion for the Penguins is only rivaled by her passion for knitting.

Her name is Michelle, she lives in Maryland and she grew to love hockey, particularly Penguins hockey, through her boyfriend at the time and eventual husband, Mike, while both were living in Arizona prior to moving East.

I asked her five questions with the goal of learning about who she is as a person and as a Penguins fan and, yes, as a knitter.

1) This is the question everyone wants to know. WHY? Why knitting and why at hockey games?

"I started out crocheting. My mom taught me when I was 4 and that has followed me through life. I started knitting about 16 years ago and then hockey got involved when I met my husband, Mike. We moved to Maryland in 2006 and this gave us the opportunity to attend 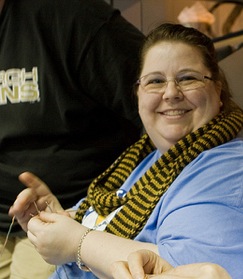 Penguins games at the Igloo. We went to one game during the 2006-07 season. It’s 500 miles roundtrip for us to go to the games, and as Maryland residents we aren’t allowed to be season ticket holders so we have to hunt for tickets to each game, but we decided it was well worth the effort. We increased our hockey travelling in 2007-08 and saw 22 games. We attended another 22 games in 2008-09. So far this season we have been to 23 regular season games and hope to make it to lots of playoff games!"

"Why do I knit at hockey games? I don’t want to miss a single second of the game. I am in my seat for warm-ups and don’t leave until the score is final. I started bringing small, easy projects to pass time while waiting for the game to start and during intermissions. Then, even the commercial breaks started to seem long and I had just learned to knit socks, so I thought hey, they’re small and I could just hold them in my hands while the game was going on and have them ready to work on during stoppages in play. And without paying attention, my hands started knitting during the game. I realized when I was knitting, I didn’t get so mad at the bad plays or that my team was losing or the refs weren’t paying attention or whatever. And when I wasn’t so mad, I enjoyed the game a whole lot more. When knitting, I tend to pay attention better; I remember more plays; I can watch the action closer AND I don’t get angry (big plus for me!)."

2) Do you knit at every Penguins game you attend and/or watch at home?

Yep, pretty much – home, the Igloo, visiting other arenas, preseason, regular season, playoffs – knitting happens everywhere.
In fact, The 2009 Stanley Cup playoffs provided two of my most memorable “knitting at the hockey game” moments. The first came in round 2, game 5 against the Washington Capitals at Verizon Center in DC. For the second time that series, we were in a luxury suite next to the one occupied by the Penguins brass, including owner Mario Lemieux and wife Nathalie, team president David Morehouse, GM Ray Shero, and some famous parents in Troy Crosby and “The Genos.” 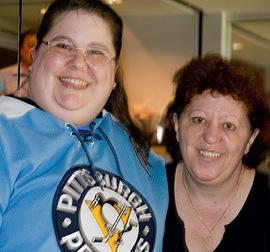 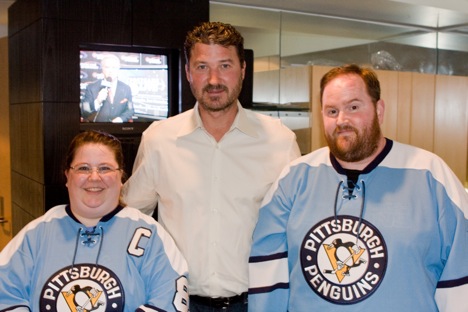 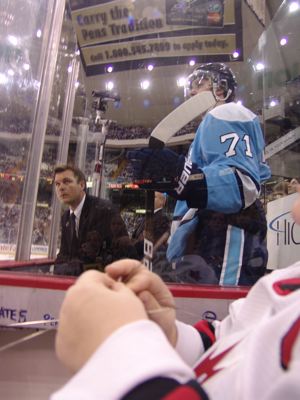 "As awesome as that experience was, our most memorable moment would have to be travelling to Detroit, then Pittsburgh, and back to Detroit for games 5, 6 and 7 of the Stanley Cup Finals. Sitting just above the Pens’ tunnel for Game 7, we had the best seats in the house to see the Pens pull off the impossible and win the Stanley Cup for the third time in team history."

3) What are you knitting at any particular game? Always socks? Always a scarf? Gifts for others?

"After we discovered that knitting allows me to enjoy the game more and not get quite so agitated (Knitting as Anger Management. Hey! It works!), we began to make a point of taking my knitting to games, usually a scarf or shawl.

"About 14 months ago, I learned about an online knit and crochet (and spinning and weaving) community called Ravelry. On Ravelry, I found friends and groups and learned there was this entire network of people who enjoyed the same things I did – including a group called "Let’s Go Pens" that shares a love of the Pittsburgh Penguins. With the help of Ravelry and a few knitting conventions, I expanded my project horizons and started knitting socks. With socks, my knitting was a lot more portable than when working on larger things like afghans and sweaters.

"There is a knitting humorist, Stephanie Pearl-McPhee (AKA the Yarn Harlot) who documents her travels by taking pictures with her sock in progress in the frame. She also has people hold her sock in progress and takes their picture. Since I love her blog and I love hockey, I started trying to get hockey personalities to hold my sock in progress for a picture. I have been pretty successful so far." 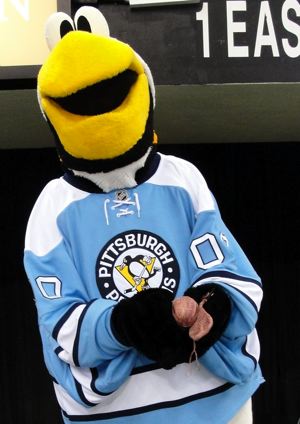 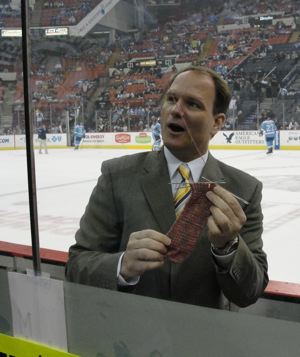 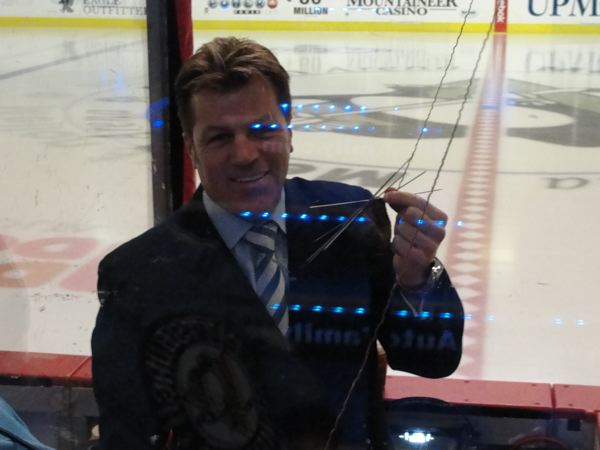 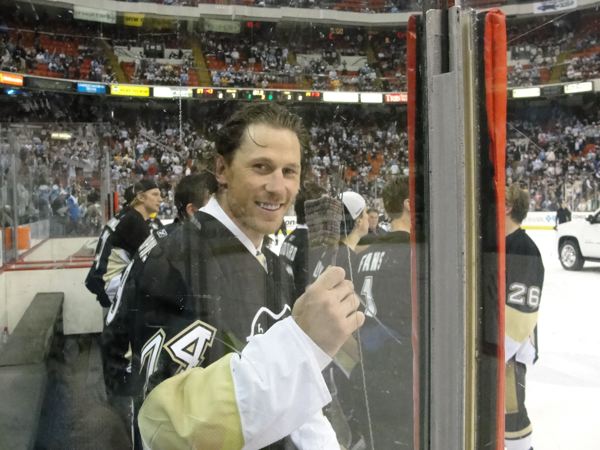 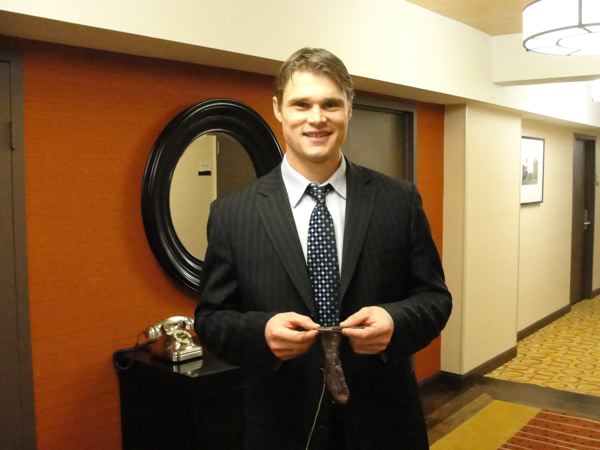 "So, since I’ve been trying to get these photos, I’ve been taking sock projects more than anything else – though the occasional shawl, scarf or hat do make it into the rotation."

4) What does your husband think of you knitting during games? Does he ever say anything to you about it?

Mike: “I love that she knits at the games. From the very beginning I could tell that the knitting had such a positive impact on her enjoyment of the games, and for that reason I fully support it. It isn’t a matter of her not loving hockey enough to get through a game without knitting, the problem I think is that she loves hockey too much. She gets so into the games that every mistake by the Pens, every missed call by the refs, and every misdeed by the opposing team would really get to her and put her in a bad mood. And that’s to say nothing of having to deal with Flyers, Caps and Wings fans when we would go to away games. Now that she can watch games without getting so upset at the little things that annoy all fans, I find that she is now able to pay greater attention to the subtle nuances of the game, and that is helping her become even more of a fan of this wonderful sport. Knitting at the games is an excellent calming mechanism for her, not to mention being very productive, though I’m still waiting for my first pair of socks!

“We have attended games with friends who are in awe of her ability to knit while paying complete attention to the play of the game. While we have encountered a number of fans at the arena who were surprised that someone can knit while watching a game, so far no one has expressed to us that they think there is anything wrong with it. The general feeling is it’s your ticket and you aren’t bothering me, so you should be able to do whatever you want.”

5) When the Pensblog guys featured you on a post on their wildly popular blog, you took quite a bit of heat and had quite a bit of ridicule directed at you by Penguins fans, some of whom were actually ANGRY that you choose to knit during a Penguins game. Were you shocked to see that and how did it make you feel?

"I was informed the Pensblog featured me when another member of Ravelry pointed it out. I took a look at the website. I had no idea that so many people were upset that someone knits at a hockey game. Some of the comments were really offensive. I have to say that I felt very shocked at the outrage and rudeness of the posts. I’m watching the game, cheering for the Pens and knitting. I am not texting, talking on the phone, banging on the glass, being obnoxious, abusing other fans, shouting invectives at the players, blocking the view, getting up in the middle of play multiple times, or anything else that could possibly affect them or their game-watching pleasure. Several posters were pretty upset that I have the “nerve” to knit at the games and apparently my knitting really pisses some people off (their words). And these people are upset because I’m “being rude to the players/coaches” or “not respecting the game?”

"I almost let their attitude stop me from knitting at the game. And then Mike made me realize all the good about my knitting (especially the anger thing above and me being a lot easier to live with after a loss) so I’m saying “Ppppphhhfff” to all the knitting nay-sayers. I can only hope that they are able to gain an understanding of knitters, and that maybe they will be more respectful of fellow Penguins fans. After all, we’re all going after one of these again:" 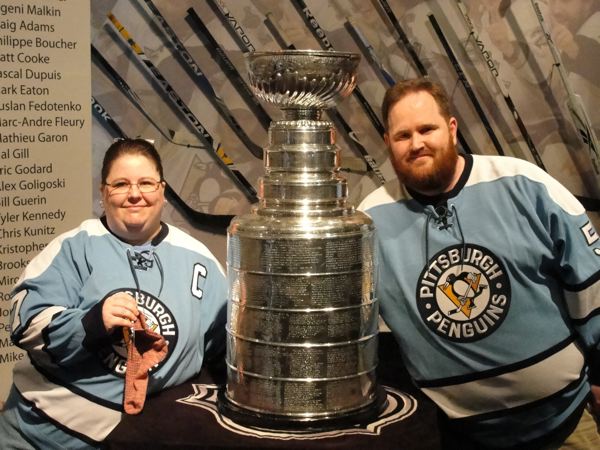 This article appears in the April 2010 issue of PittGirl.
Categories: PittGirl