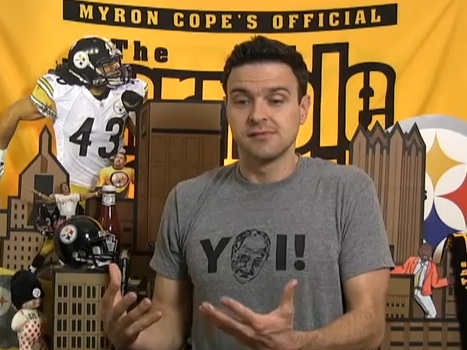 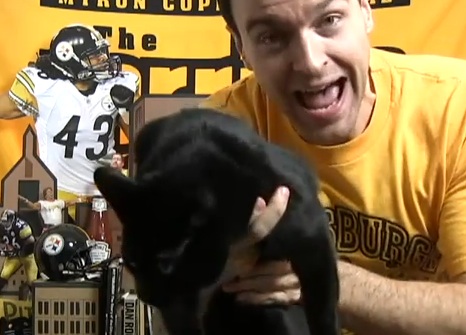 And literally, he wears a lot of Pittsburgh shirts. He tells me he has more than 20 now, and if you ask him, it seems that each has a story. His Y-O-I shirt inspires "some beautiful Myron Cope dialogue;" his Mark May M-A-Y-D-A-Y shirt is one of his favorites due to its "simplicity and randomness," and his thrifted Yough Cross Country shirt earned him an interview in Yough’s school paper—even though he’s a Shaler graduate.

Apparently it’s not because now Jim can plop an "artist" hat atop his hat-balancing head, as he’ll be exhibiting his Pittsburgh Pirates art during a month-long exhibit at Wildcard in Lawrenceville beginning April 1 called "Opening Day: Yinz Luv Da Buccos." In creating the pieces, Jim used the same art tools he wielded as a youngster: colored pencils, crayons, magic markers and watercolors. 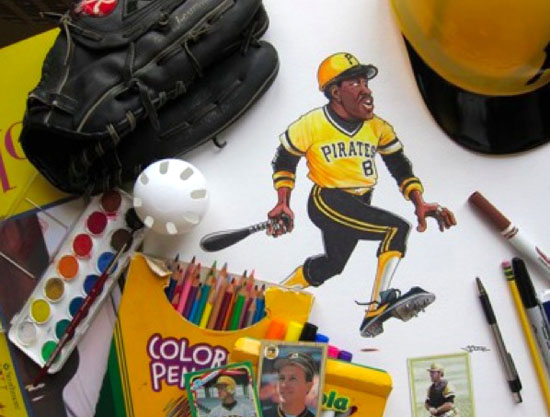 Jim intrigues me. A Cleveland-born (!!!!!) Pittsburgh-raised NYC resident who now really seems to have one foot firmly planted in both the Burgh and NYC. But where’s his heart?

I asked Jim five questions. Well, if I’m being honest, I asked him 13 and am choosing just five to share with you.

1. It seems odd that a man with a national TV gig, as you have with the Top 20 Countdown on VH1, would take the time to create a no-budget web show about Pittsburgh sports. What made you decide to create the Yinz Luv shows?

I was in between jobs in 2008; looking to move back to Pittsburgh to work in sports; was told that I didn’t have enough sports experience; and had just been turned down to host a web-show for the NHL. Amidst this perfect storm of rejection, the Penguins had just started their playoff series with the Senators. I decided to take matters into my own hands and start my own web-show.

2. I have a vision of you sitting alone in a little apartment in New York City with a camera on a tripod, doing your show while Bat-Bat [Jim’s black cat and sidekick] shoots you haughty looks. Is that how it’s done, or do you have a team of people that helps you each week?

Your vision is correct! I do the show alone in my NYC apartment. Out of kindness toward my wife, I record when she’s not around. And when I look off camera to talk to my crew, that’s me just wishing I had a crew. Bat-Bat usually sits on the bed and patiently watches.

When I first started YLDG, each episode took an hour or two to do. Over the years, I’ve had episodes that have taken as long as 12 hours to piece together. I’m in a dangerous place now. I want the show to perpetually improve, but there are only so many hours in a day, and I can’t slack on my day job either.

I have a few—and if any of them could ever happen in Pittsburgh, even better:

1.) Host/produce a studio-based, nationally televised show that has a strong music journalism focus (which would also be entertaining to watch).

2.) Host/produce a sports program that’s less about X’s and O’s, and more about showing off the personality behind athletes and fans. I’ve always thought it a little odd that sports—which are just childhood games—are treated so reverently that hosts have to wear formal attire.

3.) Host/produce a Wayne’s World-like show where I could hang out with my favorite athletes, musicians, and celebrities. It’d be one step down from a late-night talk show and one step up from cable access.

4. The Yinz Luv show intro has some really great artwork that I assumed you had an artist friend do, but now that I’ve been made aware of your Pirates exhibit at Wildcard, I’m thinking you must do the artwork yourself. First, is there anything you can’t do? But more importantly, tell me about this exhibit. I mean, the Pirates aren’t exactly inspiring many works of art these days.

Yes, I do all of the artwork. I’ve been doodling ever since I was a kid.

Here’s how the Pirates exhibit came about:

Every summer—believe it or not—I’ll get e-mails from people complaining that there’s not a Yinz Luv ‘Da Buccos series. First of all, whenever a team loses, my YouTube views will go down drastically. I’ve followed the Steelers during a season where they won the Super Bowl, and whenever they lost during the regular season, you could see tumbleweeds blowing around on my YouTube account. Just imagine what would happen if I covered the Pirates?!

My good friend Becky runs Wildcard, and every month she’ll have an artist exhibit their work on the back wall. She asked me if I wanted the month of April, and I was like “Heck yeah!”

My original idea was to just do a bunch of Pittsburgh sports players portraits, but once I did a couple of Pirates, I had a rush of nostalgia and decided to just do an entire Buccos gallery. If you check out the exhibit, you’ll also learn that I was responsible for the Pirates’ historic string of losing seasons and what I’m doing to remedy the situation.

5. You’ve lived in Pittsburgh. You live in New York. Tell me your thoughts on the differences between the cities and their people.

First, no one rallies around their sports teams better than Pittsburgh. When the Giants played in the Super Bowl a few years ago, I didn’t see any blue-and-red cupcakes, cookies or cakes when I went grocery shopping. When Pittsburgh goes to the Super Bowl, you’ll get a blast of black-and-gold right as you walk outside your front door.

The people of Pittsburgh have a kindness and simplicity that you don’t see in a lot of bigger cities. I love the size of Pittsburgh, because it’s small enough where the city feels like a family, but it’s big enough to have museums, sports teams, cool places to hangout and an airport with lots of breathing room (not to mention a Tyrannosaurus Rex and a life-size Franco Harris replica).

I can’t hate on New York City though because it has a lot more opportunity in my field of work, and I love it’s diversity and non-stop energy.

It’s great to have a foot in both places; it’s a constant tug-o-war, but let it be known that I’m a Pittsburgher first.

This article appears in the March 2011 issue of PittGirl.
Categories: PittGirl