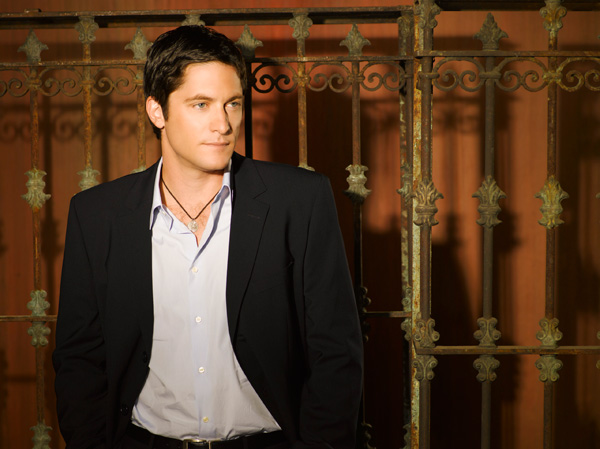 My, let’s not call it obsession, let’s call it … ah, screw it, obsession with David Conrad dates to about 15 years ago. At the time, he had caught his big break starring in ABC’s Relativity opposite Kimberly Williams, yet despite his success in Hollywood, was attending a Halloween costume party benefiting a local arts organization here in Pittsburgh. So while the ladies of Pittsburgh were all, “His eyes. His hair. His face. His HOTNESS,” I was all, “HIS LOVE OF PITTSBURGH! [swoon].”

I made up my mind right then and there, over the pages of the newspaper which featured a picture of him at the party, that somehow, someway, someday I was going to meet David Conrad and hug him and tell him how much I love that he continued to love Pittsburgh even when Hollywood came calling.

It took 13 years, but I did finally get to do that when I had lunch with him at The Common Plea two years ago.

A Juilliard-trained actor born and raised in Pittsburgh, he continues to make a home here and stays heavily involved in local projects and organizations he believes in. He recently celebrated his 100th episode starring in CBS’s Ghost Whisperer. He produced, directed, and starred in Burn This at the New Hazlett Theater last summer and you can catch him live, narrating Copland’s A Lincoln Portrait on April 11 at the Carnegie Music Hall in Carnegie.

I emailed David five questions. Here are his answers:

1. When are you going to do Shakespeare in Pittsburgh?!
As soon as someone wants to do Coriolanus or Love’s Labour’s Lost or Measure for Measure, and calls me.

2. If you had just one day to show an outsider the City of Pittsburgh and to make that person fall in love with it, to which location(s) would you take him or her?
I’d bring them straight through the tubes to La Prima in the Strip for a mini-breakfast (not on a Saturday of course), then I’d take them up to Polish Hill and show them the Basilica and the monument bearing the names of local men who served in WWII (nearly every walking male between 17 and 40) so they get a sense of the backbone of this City, then I’d say, “Hey do you want to hike a little?” and I’d go out to Fox Chapel and park at the back of Hartwood and walk all the trails, saying hi to the draft horse that lives down in the hollow and then up to the Mansion for a tour. Have an early lunch on the grass, or if it rains drive down to Millvale and go to Pamela’s.

That afternoon I’d blindfold them, walk them into Heinz Chapel, take off the cloth and ask, "Where are you?" Then I’d ask Denny Davin at The Allegheny County building to let the people at Rivers of Steel National Heritage in Homestead give us a tour of the Carrie Furnace in Rankin- something they’ve been doing for ages before the County locked them out- we’d go into the old Mill and Augie and Ron from Rivers would tell us how the place worked and how the men and women of the Mon Valley poured in and out of these factories and I’d say, “Remember that chapel we were just in? This is where it was paid for.”

Then we could skip up to Duquesne and my friend Bud could get us into a private club where we could have 75 cent drafts and a buck and a quarter shots and talk a little more about how the Valley thrived when Steel was strong, or about his horses, or the history of Pitt football or the little place he visits down in St Maarten in the Winter to keep his health up. And maybe he’d mention how his pension and his health care, thanks to his Union, actually still work.

Cut over the hill to Munhall, drop Bud off at his house and after he gives us something from his garden, visit the painter Ben Matthews who shows in NYC galleries and whose paintings sell for 15 to 20 grand a pop but who prefers to remain in his home town and work for a landscape crew.

Shoot over the Homestead Bridge (Josh Gibson, if you please) and grab some coffee and a cupcake at Dozen (maybe we’ll get lucky and get the PB and bacon!) in Squirrel Hill. We could pop into the JCC and see if one of the Oral History speakers is holding forth on the miracle of surviving WWII or the beauties of Eastern Poland before the War, or the Sephardic tradition in song and music.

I’d let them go back to their suite at the Sunnyledge B&B and wash up and change for the evening. Meet them in that perfect little bar or the library there at seven and then, if it’s a weekend, for sure take them to the Symphony, one of the crowning glories of Pittsburgh. If the second half is not to their liking, say they don’t like Berlioz or something, then I’d sneak them over to Arsenal Lanes in Lawrenceville and see who’s playing a very different kind of music while we blow a rack or two.

It’s nearly ten now so have a late dinner at Mio in Aspinwall, walk the beautiful streets there to work off the astounding desserts while I make them laugh guessing what the approximate mortgages would be for the handcrafted, well-lighted and lovely homes they’re seeing pass by.

Drive down 28 with the city turning into view on our left, cut across 579, and over the Liberty bridge, up McArdle and yes, park on Grandview and push them out to the fence. "All this can be yours…."

3. Answer me honestly and I promise I won’t freak out and try to chain you to the Roberto Clemente Bridge no matter how you respond: Do you see yourself living in Pittsburgh in ten years? Twenty?
Ten, no doubt. Maybe sooner. 15 acres in Butler County abutting a State Forest. Two horses, me, cats and dogs, and a library.

4. Will the Pirates finally play .500 ball this year? I say they will. You say?
Getting excited about the Pirates maybe playing .500 ball is like getting excited that Stalin is only gonna jail your neighbors. Nutting and his gang should be forced to sell the team. They’re a disgrace to our community and to American sports. I only hope I get a chance to tell him to his face.

5. If you won an Oscar, who would be the first person you would thank?
Don’t think I haven’t wondered.

So, new goal in life. Spend a day with David Conrad doing EXACTLY what he described in #2, because I’ve seen Pittsburgh, but I haven’t seen all of David Conrad’s Pittsburgh.

This article appears in the March 2010 issue of PittGirl.
Categories: PittGirl