Five of our Favorite Underground Bars in Pittsburgh

We've got your guide to all the hottest underground bars and pubs — and we mean that literally. 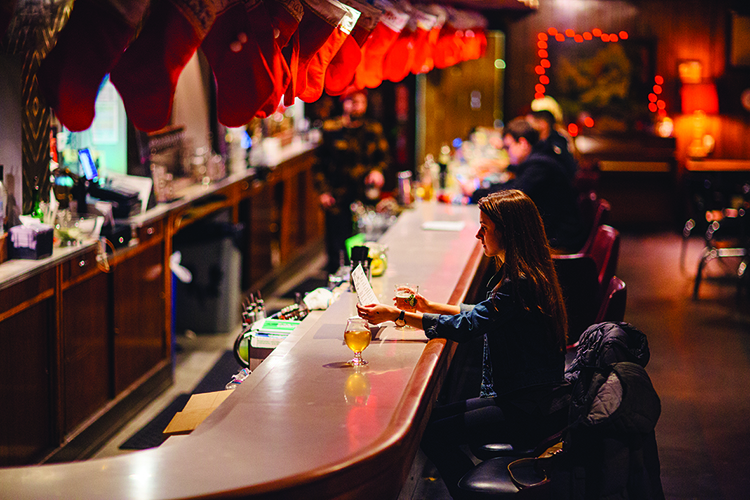 There’s no need for excuses: It’s December, and you’d probably like to burrow somewhere warm with a decent drink.

In light of the inclement weather, you’re going to be looking for a somewhat more cave-like atmosphere for your revels this month. Fortunately, there are plenty of respectable local establishments that require guests to descend a flight of stairs in order to be served.

Perhaps the most obvious choice is Speakeasy (omnihotels.com), the downstairs Downtown prohibition throwback on the lower level of the Omni William Penn Hotel. Speakeasy comes by its name honestly — illicit hooch was indeed served here in the ’20s — and leans into the setting, with jazz slinking out of the speakers and finely attired bartenders awaiting your order. Stick with classics when perusing the sizable cocktail list, and be prepared to leave a sizable chunk of cash behind; Speakeasy sits firmly at the expensive end of Pittsburgh bars. If you enjoy the time period, Speakeasy is a fine choice for an upscale night out.

The polar opposite can be found in Millvale, where Good Time Bar & Grille (goodtimebar.com) lurks in the basement of a building just at the Shaler Township border. You may have heard that Millvale is trending toward hipster territory; that’s not the case at Good Time Bar, a former filming location for the “Outsiders” TV series. Karaoke performances (three nights a week, by the way) are more likely to include an old man singing Cat Stevens than a millennial screaming out a Pixies tune. Be forewarned: smoking is allowed here. On the other hand, you’ll barely dent your wallet; on my visit, three drinks, a dozen wings and a basket of fries cost less than $25. Tip included.

Frequent visitors to Row House Cinema in Lawrenceville likely have discovered Bierport (bierportpgh.com), the bottle shop and tap room underneath the single-screen movie theater. With a diverse and seasonal selection of beers on tap and in bottles, though, Bierport deserves to be visited on its own merits. Tie-in events with the films are fun, but no excuse is necessary to commandeer the small space’s corner booth for a few rounds.

Those looking for a long winter’s nap would be well-advised to first head to Strip District mainstay Casa Reyna (casareynapgh.com), the subterranean cantina and restaurant known for fresh tortillas and Mexican beer. The restaurant’s sizable selection of cerveza and tequila pairs perfectly with the fare; there are plenty of menu options, but my preferred methodology for a visit is to order fresh guacamole, queso fundido and a salsa sampler (the chipotle flavor is a favorite) and dip until I can eat no longer. Call a Lyft, get a ride home, fall asleep on the couch.

Finally, Lawrenceville favorite Spirit (pictured, spiritpgh.com) — selected this year both to our own “Best Bars in Pittsburgh Right Now” feature and Esquire Magazine’s venerable “Best Bars in America” rankings — is mostly underground; while you do have to walk downstairs to reach the place, at least one wall has an exterior door. Given Spirit’s consistent quality, however, we’re willing to make an exception to include it on this list.