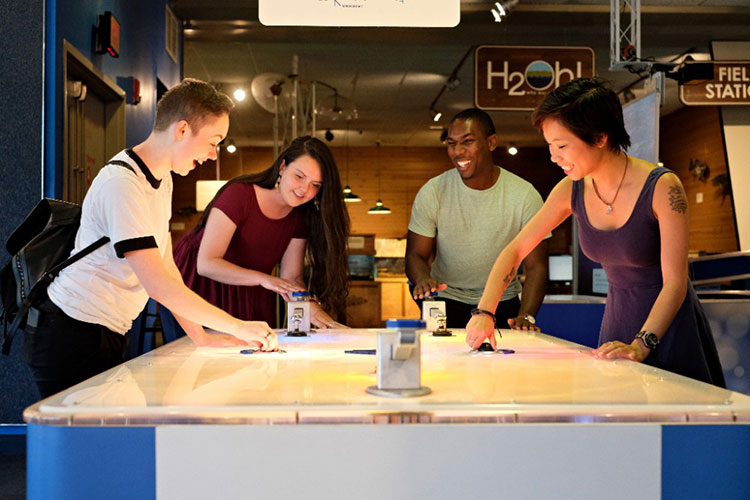 Admittedly, I do leave town every January.

My lifelong affair with pro wrestling got me in the habit of making an annual pilgrimage to watch WWE’s Royal Rumble event, wherever it is held each year. In Januarys past, I’ve trekked to San Antonio, Orlando and Philadelphia (twice); this year, I’m bound for Phoenix. I’m in it for the show, sure, but I also don’t mind getting away from the rain and gloom.

One thing I’ve noticed, though: Every time I end up making that trip, I’m missing any number of events I would’ve liked to attend back here. Pittsburgh does not take January off, no matter how much we are inclined to burrow so deep into our couches that we will encounter remote controls from televisions we don’t even remember owning.

Below, five events nearly as good as a pro-wrestling sojourn to the southwest.

21+ Night: Body Art
Jan. 11, Carnegie Science Center
I first attended one of the Science Center’s 21+ nights when I was asked to be an onstage volunteer for a facecasting demonstration. I’m not sure where the shockingly realistic mold of my face ended up (I may have donated it to the ScareHouse for future use), but I left convinced that the North Shore landmark does right by its monthly adults-only sessions. The themes always offer some unique experiences — you’ll see body-painting demonstrations and can get everything from henna prints to the real thing at this month’s “Body Art” themed evening — but the real joy is the ability to enjoy all of the Science Center’s cool stuff without all those pesky kids running around.

You’re the Next Contestant
Jan. 17, Arcade Comedy Theater
Sure, there are still plenty of game shows, but The Rock telling people to conquer giant obstacle courses and Antonio Brown as a singing hippo are a far cry from a besuited guy with a long microphone reading questions from index cards. If you long for the simpler game shows of years past, head to Arcade for “You’re the Next Contestant.” I saw an early installment of this variety show, which puts fictional characters into old-school game formats, last year, and found it endlessly entertaining. This month’s show will pit members of the Arcade crew against their neighbors from Bricolage Production Company.

Rifftrax Screening of “Indiana Jones & The Kingdom of the Crystal Skull”
Jan. 18, Row House Cinema
There is no dark mark on a franchise so dark as this, the long-awaited follow-up to the original “Indiana Jones” trilogy that arrived with a depressing whomp in 2008. Most long-running series have black sheep, but “Kingdom of the Crystal Skull” is just so darn bad that, after 19 years of waiting, it was exceptionally heartbreaking for fans. Fortunately, the Rifftrax team — Mike Nelson, Kevin Murphy and Bill Corbett, of “Mystery Science Theater 3000” infamy — produced a scathing commentary, which will be played over a one-night-only screening of the dud at Row House. (It’s part of an otherwise fine Spielberg week, featuring “Jurassic Park,” “Ready Player One,” “E.T.” and “Indiana Jones and the Last Crusade.”)

Crash Test Dummies
Jan. 19, Jergel's Rhythm Grille
My love affair with Jergel’s will only grow deeper if they add more quirky ’90s alternative acts to their calendar. The odd Canadian rockers Crash Test Dummies, best known domestically for the 1993 hit “Mmm Mmm Mmm Mmm,” will appear at the Warrendale venue to play their altogether excellent “God Shuffled His Feet” album in its entirety. Keep a regular eye on the Jergel’s calendar throughout 2019; if a sold-out, two-night residency by Ja Rule is any indication, it’s going to stay interesting.

Miss Blue Moon 2019 Pageant
Jan. 20, Blue Moon
Pittsburgh’s always-thriving drag community will compete at Blue Moon — perennially among the best local gay bars and, two years or so ago, our pick for the city’s Best Inclusive Barspace — to decide who will wear the Miss Blue Moon sash throughout 2019. Expect a full pageant infinitely more delightful than whatever form Miss Universe currently takes. Animation aficionados, take note: This year’s competition is themed around Disney villains, so … Be Prepared. (Look, if you’re not comfortable with obvious puns, I’m not sure drag is for you.)