Five Beers You Need to Drink This Summer

We’ve all got problems, and there's a beer to solve each and every one. 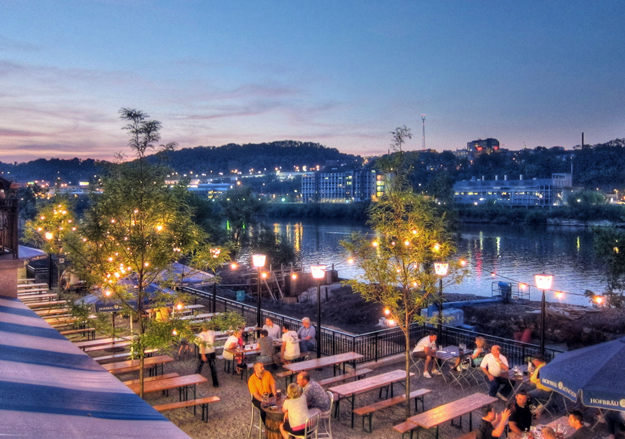 If one Homer Simpson quote deserves to be etched in marble, it is assuredly the yellow prophet’s famous toast: “To alcohol! The cause of, and solution to, all of life’s problems.”

Homer’s wisdom is doubly true in the warmer months, where it seems that every holiday, outing and occasion is made more complicated by the presence (or lack of) proper drinks. Here, then, are five local brews you should have in tow to face down the summer’s challenges.

Problem: You do not think that this picnic is going to be interesting.
You have to go, that’s been established. Maybe you blew off the host at Christmas, maybe you agreed to make a batch of five-layer dip in a moment of weakness, or maybe you just couldn’t come up with a believable excuse on the spot. But one way or another, you are attending this event, and you are not too happy about it.

Solution: Church Brew Works’ Celestial Gold
You need a nice, agreeable beer that you can stick with all night to get you through this one. And you can bring a case, if you feel like sharing — Celestial Gold is the go-to brew at Church Brew Works, neither too hoppy nor too sweet. It’s also decidedly light enough for summer, but still boasts a distinct, memorable flavor. Find a lawn chair and put a cooler next to it. Prepare to stand your ground. If there’s someone who can get you hot dogs, you’re set for the evening.

Problem: You are hanging out with elderly relatives.
And they’ve got plenty to say about your generation. You’ve got your nose buried in that phone, dammit, pay attention! You can text when you get home! And don’t get them started on politics/the economy/the election. They could go all night about that mess. And yes, seriously, they could. And they will. And they don’t need none of your fancy college beers, neither! Give ‘em a tap of cold Iron! That’s all anybody needs!

Solution: Iron City Amber Classic Lager
They’re happy with the Iron City name, you’re happy that you can still instill a little variety into their lives. Amber is the newest offering from Pittsburgh Brewing, a nicely malty brew not dissimilar from Yuengling; it’s a got a nice taste and decent weight, without being too heavy or rich. A fine choice for splitting a six-pack with the old man. Any old man, really. And if he does get going on the government, try to slip in a complaint about Rolling Rock leaving Latrobe — he’ll give you a soliloquy that’s much easier to nod along to.

Problem: Beer costs WHAT at the ballpark?
How much? For THAT? That’s all they have on tap at this concession stand? I already had to pay thirty bucks for a bucket of wings, now I have to wash it down with (insert name) Lite and pay handsomely for the privilege?

Solution: Penn Pilsner
First off, calm down. Believe it or not, PNC Park’s beer prices are among the lowest in professional sports, so you should really be thanking them — it could be much worse. And they’ve done a good job of offering a wider variety of brews, too. You just have to know where to look. Head to sections 107 or 134 to find Penn Pilsner on tap. I think that Pilsners taste perfect at the ballpark, but if you’re in a hoppier mood, they’re pouring Penn Pale Ale too.

Problem: The people you’re having dinner with know much more about beer than you.
They’ve already explained the history of the name Budweiser in the course of a thirty-minute dissertation on why Czech beers are the best in the world, but only if you’re drinking in Prague. You are now aware of what noble hops are. Despite still having no idea what specific gravity is or what it means to the beer in your hand, you’re being forced to opine on it. You’re pretty sure they noticed your Guinness keychain, too. They did not seem to approve.

Solution: Full Pint White Lightning
Full Pint’s still flying a bit below the radar, so it’s feasible that there are local beer snobs who haven’t had all of their fine varieties just yet. Show even the sudsiest beer nerd a thing or two with this, an irresistible Belgian-style white that’s perfect for sipping in the beer garden under a starry sky. If this only serves to drive your companions into a further frenzy, point out that the North Versailles brewery offers tours. They’ll dash to the car and leave you to enjoy your beer in peace.

Problem: You do not actually want to participate in this outdoor activity.
It’s a long history with you. Your first bike was crushed by a garbage truck as you watched from your bedroom window, dismayed and confused, your opinion on garbagemen forever changed. Your last hike ended in what is now solemnly referred to as “the tick incident.” You tried kayaking, and while everyone around you was paddling happily and heartily, you learned what river water tastes like. It does not taste good. Not at all.

Solution: East End Brewing’s Pedal Pale Ale
Still on East End’s seasonal list, Pedal Pale Ale is one of the most popular local brews, and for good reason — it’s a perfect, partially hoppy construction, ideal for summer but great anytime. And it was originally brewed for Bike Pittsburgh’s 2005 Bike Fest, so you’ll get to show your solidarity with those outdoorsy types without actually having to exert yourself. And remember — if you stick to the bar and leave the adventures to the adventurous, the fastest-moving thing you’ll fall off of is a stool.