You can watch the new, fuzzy grey baby on the Audubon Society’s webcam. 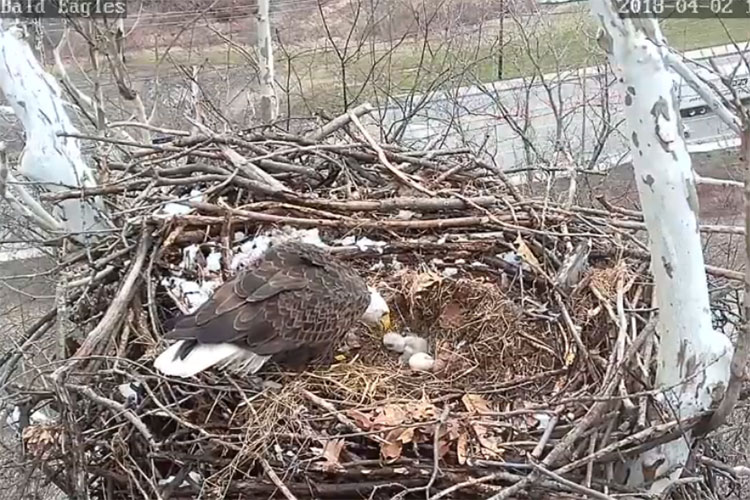 Mama eagle is awfully protective of her baby bird, but if you look closely you can get a glimpse of the first eaglet hatched this year in the Harmar nest.

The Audubon Society of Western Pennsylvania, which monitors the bald eagles’ nesting habits in their nests in Harmar and Hays each spring, reported the Harmar egg hatched around 10 a.m. Monday. The remaining egg in the nest is still being incubated and is also expected to hatch this week.

The grey, fuzzy eaglet can be seen underneath the adult female in this video released by the Audubon Society Monday.

“She’s going to stay on top of the eaglet to protect it and keep it warm — and also because there’s another egg in the nest,” says Audubon Communications Director Rachel Handel. “She’ll continue to roll that egg to keep it at a consistent temperature, then she’ll sit back on top of both of them.”

The adult male and female eagles take turns with parenting duties. When hatching is near, Handel says they’ve noticed it’s more often the female in the nest, but overall the male and female alternate sitting in the nest and going out to hunt for food — fresh fish — for the babies.

Handel says the eaglet in the nest in Hays, which was born on March 23, often tries to squirm out from under the adult eagles.

“The parents have their hands full,” Handel says.

Handel says in past years, the view into the Hays bald eagle nest was a bit more direct, but this year the Harmar eagles are getting more attention.

“The Hays eagles tend to have an eaglet first. The Harmar nest I think for a long time kind of was overshadowed. This year we have a great view into both nests,” she says, noting Comcast Business provided the cable connection for the Harmar nest so that the society could broadcast the eagles’ comings and goings.

Handel says the egg in Harmar began to show signs of hatching Sunday night, and she’s heard from some dedicated observers who were monitoring the live video stream throughout the night.

“People get really excited about it,” Handel says. “It’s really great to see the level of excitement.”