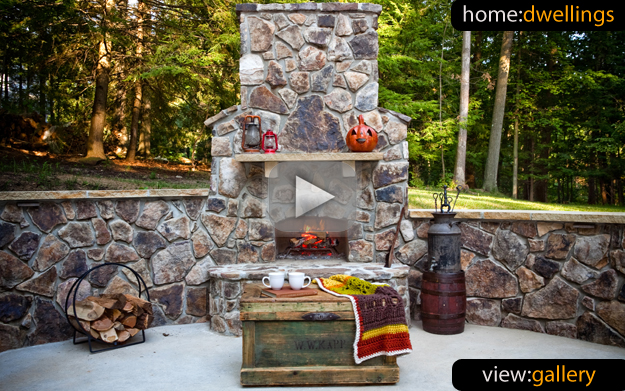 Emily and Steve Georgescu have always loved fall weather. But they awaited it with special excitement this year: As summer drew to a close, construction was completed on the fireplace that is now the centerpiece of their North Hills backyard.

It quickly became the gathering place for their extended family and friends.

Investing in elaborate, built-in fire pits and outdoor fireplaces isn’t a new trend, but it’s one that seems to be gaining traction throughout the country. Although year-round outdoor living is often associated with warmer climates, many Pittsburghers are using fire pits and fireplaces to enjoy their yards well into the fall and winter seasons.

Why They Love It

Steve spends his days inside a hospital, working in operating rooms without windows. During late fall and winter, he often leaves for work in the dark and drives home in the dark, not seeing daylight or spending time outdoors.

And Emily, who once worked in corporate offices and restaurants, is now a full-time mother, dedicating her time to their two small children. The new fireplace tends to lure the couple outside, serving as a great counterbalance to all their indoor hours.

They’ve also been enjoying another benefit: While sitting by the fire, they don’t multitask. In the house, it’s easy to get distracted by everything from emails to housework to TV. But when they go outside to build a fire, the slow, steady process takes their full focus: choosing the logs, stacking the wood just so, lighting it, beginning to nurture the flames, adding a bit more kindling.

Distractions fall away, and the couple finds themselves wrapped up in wonderful conversations with each other and with friends who visit. 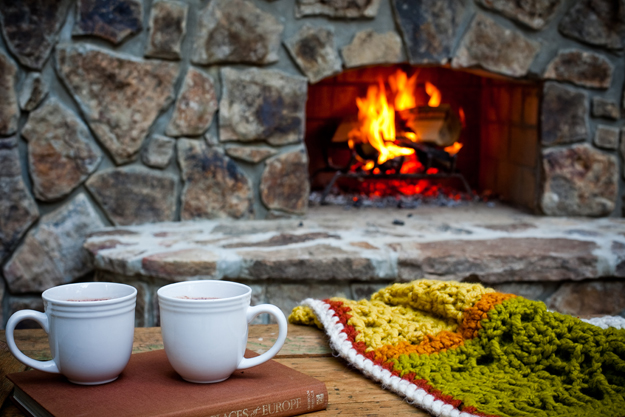 How They Did It

The couple knew exactly what they wanted before construction began. After interviewing three contractors, they chose Anthony Cavaliere, who worked closely with them to execute their design.

The entire project—the fireplace and a long stone wall bordering their patio and extending fully around one side of their house—began in 2010 and took about seven months to complete; it’s crafted from natural Maryland field stone.

The design, which includes a large shelf that functions like a mantelpiece, could fit well in a rustic cabin. The low wall extending around space adds to the feeling that the patio has become an additional room. (Conveniently, the wall also adds extra seating for parties.) Indirect lighting built into the wall amplifies the soft glow of the fireplace and further enhances that indoor/outdoor feel.

By building the fireplace along the perimeter of their patio (rather than building a fire pit in the center), the patio area remains very flexible: It’s normally home to comfortable seating and a picnic table for dining. But for parties, they can remove those items and fill the space with tables to entertain a large group. That’s the plan for the upcoming Oktoberfest bash the couple is hosting for family and friends. And though it’s a while away, they’re already envisioning the time they’ll spend by the fire during Christmas.

“It’s become a place for the whole family,” says Steve. “It’s a way to give back and to really be with everyone.”

With two small children, the Georgescus are always thinking about safety while using their outdoor space. Here are a few tips:
» Instruct your kids to stay away from the flames and continue to reinforce that message.
» Design the fireplace with a large ledge in the front; it’s great for many reasons, especially since it keeps everyone further away from flames.
» Don’t create a large fire when children are around.

This article appears in the October 2011 issue of Pittsburgh Magazine.