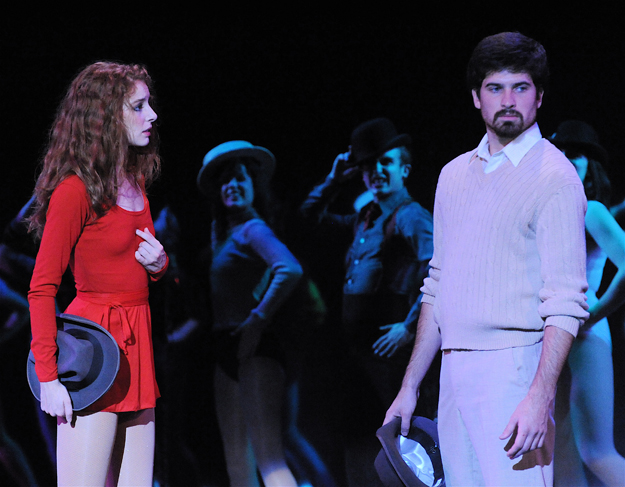 A Chorus Line is a musical about people trying to make it in musicals. Seventeen dancers audition for a Broadway show, but only eight will be cast. One by one, they tell their stories, sing songs about their lives, and hope to make the cut. The show is earthy and realistic, and every struggling actor can identify with it.

Fitting, then, that A Chorus Line would receive a production at the Pittsburgh Playhouse, performed by the young actors and singers of the Point Park Conservatory. If Broadway was tough in 1975, it’s vastly more difficult today, and the show’s theme—following a dream in a cutthroat business—has stood the test of time.

“People forget how old the show is,” says Ronald Allan-Lindblom, Artistic Director of the Pittsburgh Playhouse. “It seems just as relevant today.”

The show won 12 Tony Awards, as well as the Pulitzer Prize for Drama. A Chorus Line succeeded by providing bare essentials. A barren stage is surrounded by visible lights and no particular backdrop. Instead of elaborate costumes, the actors generally don tights and casualwear. The show is remarkably character-driven, with each person relating his or her backstory.

Still, A Chorus Line is no monologue show. The choreography is a heated mix of ballet, jazz, tap and tumbling, and the dancers rarely leave the stage. The dance is so aerobic that even the audience is usually winded by the show’s final song, the famous “One.”

The Playhouse production is notable for two reasons: Marvin Hamlisch, who composed the music to A Chorus Line, is currently Distinguished Master Artist in Residence at the Playhouse. While Hamlisch isn’t personally contributing to the show, he has been leading workshops on auditions and composing for film.

Meanwhile, the show is directed by Danny Herman, who played “Mike” in the original Broadway production of A Chorus Line (after the role was created by Wayne Cilento). In the show, Mike is a jokey young auditioner who used to eavesdrop on his sister’s dance class and dream of becoming a dancer himself. Mike sings one of the show’s better-known solo songs, “I Can Do That.”

“It made sense to do a revival,” says Allan-Lindblom, given the availability of Herman and Hamlisch. As for the students: “[The themes are] right in their laps. It’s surprising how complicated the show is.”

The original Chorus Line was something of a coup in theater history, a show that both celebrated Broadway and sympathized with its aspirants. Allan-Lindblom remembers seeing the show for the first time.

“It was probably the late 1970s or early 80s,” he says. “The first time I saw it was in New York. There was a whole crew of us that had just finished [training] at a place called the Pacific Conservatory of the Performing Arts. We had just come down from Boston to see it. And we were as struck by it as everyone else.”