With the Carnegie International as the backdrop, we feature work by local fashion designer Elaine Healey, who has been morphing from luxury womenswear to a more “non-binary” style. 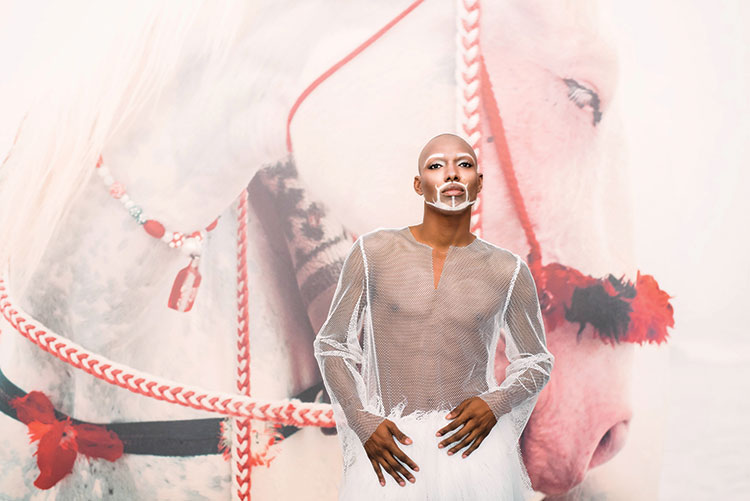 Mimi Cherono Ng’ok
Untitled, 2014
The Kenyan photographer’s work is often dreamlike and surreal in the way she uses color, landscape and people/animals. She speaks about the importance of her own emotional connection to the object of each piece and how that emotion informs her artistic eye.

Over more than three years, curator Ingrid Schaffner worked to bring this collection together, including a year of travel to 23 countries on five continents. The exhibition explores what “international” means at a moment when questions of nations, nationalism, boundaries and border crossings are becoming ever more urgent. Schaffner did not have to go far to find some work for this exhibit as a few artists with Pittsburgh roots play prominent roles in this exhibition.

Thaddeus Mosley’s works greet guests in the museum’s lobby. A massive stand of his sculptures, carved from cherry, black walnut, white oak, chestnut and elm, create a forest of their own, while a smaller collection of sculptures sits right on the other side of the glass from the lobby in the Sculpture Court.

Mel Bochner learned to draw at the age of 8 at the Carnegie Museum of Art. A large collection of his work is exhibited on one gallery wall, while still more pieces from his collection
make cameo appearances throughout the museum.

London-based artist Lynette Yiadom-Boakye is this year’s winner of the Carnegie Prize. Yiadom-Boakye does not paint portraits of real people but instead has scrapbooks filled with images from magazines and elsewhere that she uses to dreams up her subjects. She often places them in hazy rooms or spaces with no decade-specific details, and intentionally avoids painting shoes; critics have said this creates an environment that allows viewers to have a very personal interaction with her work.
These are three of the seven artists whose work we’ve paired with Pittsburgh designer Elaine Healy to explore the connection between art and fashion. 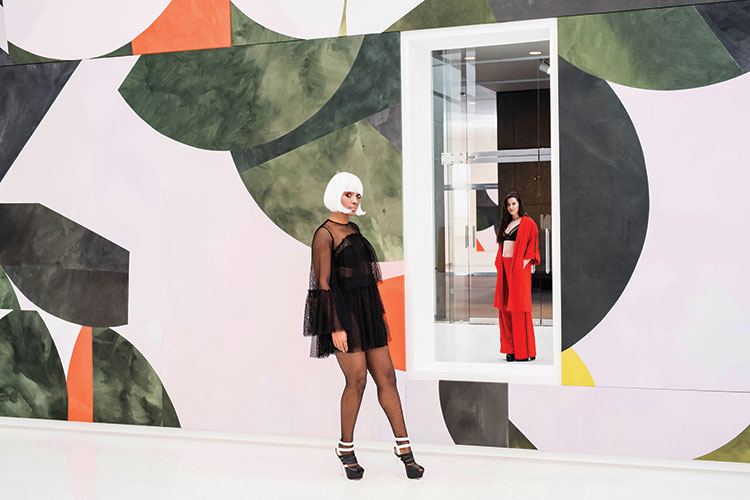 Sarah Crowner​
Sliced Tropics, 2018
Sarah Crowner’s Sliced Tropics is all drama and color. Reaching nearly from floor to ceiling, this work is made of panels of painted fabric that create the illusion of one continuous canvas. Working in concert with Ulrike Müller, with whom she shares the space, Crowner designed a work that has a window cut out of it. The missing panel can be seen in the entrance to the Scaife galleries on the opposite side of the landing.

Brielle Walker is wearing a tiered babydoll dress in black utility mesh;  designer Elaine Healy is seen in the background. 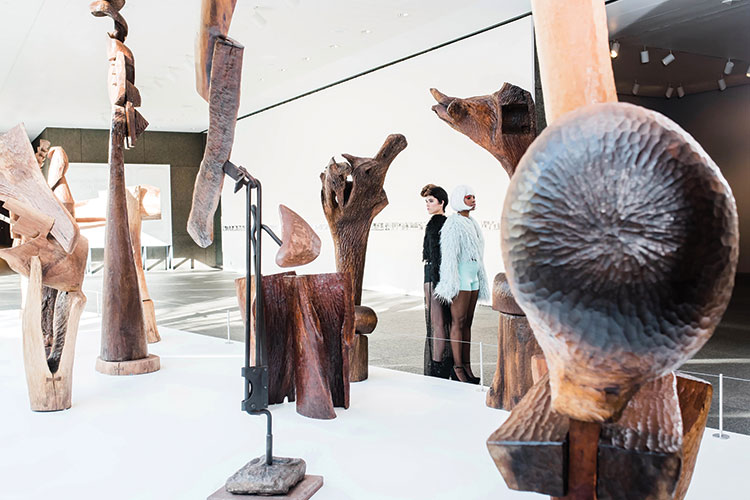 Thad Mosley
Thaddeus Mosley collection, 2018
The 92-year-old sculptor from Pittsburgh had a career as a freelance journalist for the Pittsburgh Courier and then as a postman, while continuing his sculpting. He has had a few shows at CMOA (one in the ’60s and another in the ’90s). He describes his sculptures as structure that seem to float. He also has permanent installations throughout the city (two in the Hill District and one at the David L. Lawrence Convention Center, for example). 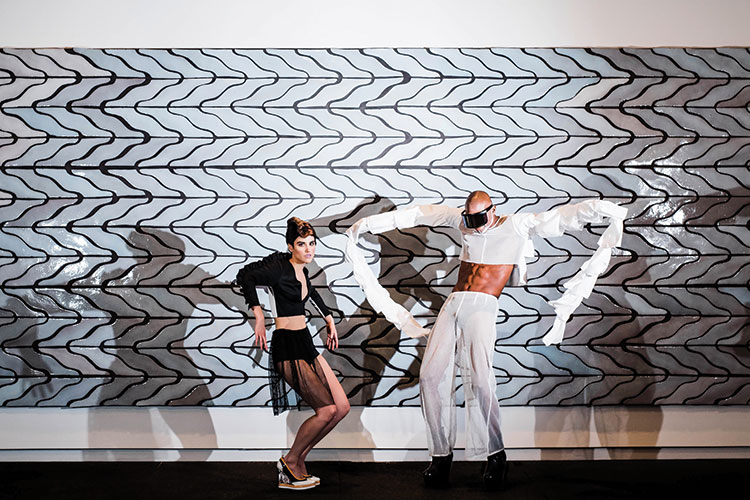 Sarah Crowner
Wall (Wavy Arrow Terracotta), 2018
The artist works in the juncture between painting and sculpture. Her work is usually geometric and abstract, playing on color and architectural design to create distinctive pieces. This wall is made up of many individual tiles made in Mexico at a ceramic studio. Their even layout sits in contrast to the textural and color differences found on each tile piece. 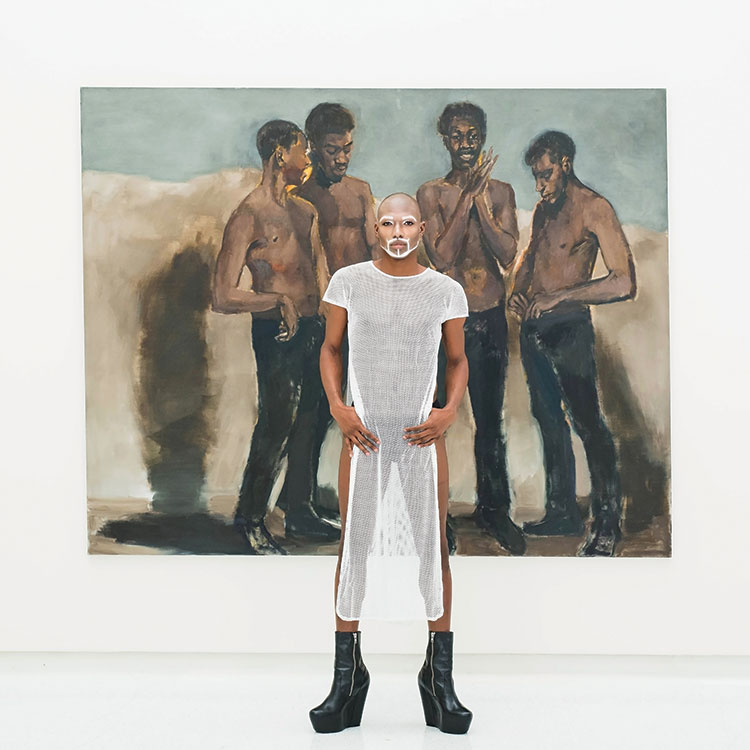 Lynette Yiadom-Boakye
Amaranthine, 2018
This year’s winner of the Carnegie Prize, the London artist has become well-known for her portraits of people she dreams up. Using a stream-of-consciousness style, she usually completes each individual portrait within a day and then decides if she likes it. She almost always paints people of color, noting that this is less a political move and more about painting what she knows — she herself is a woman of color. 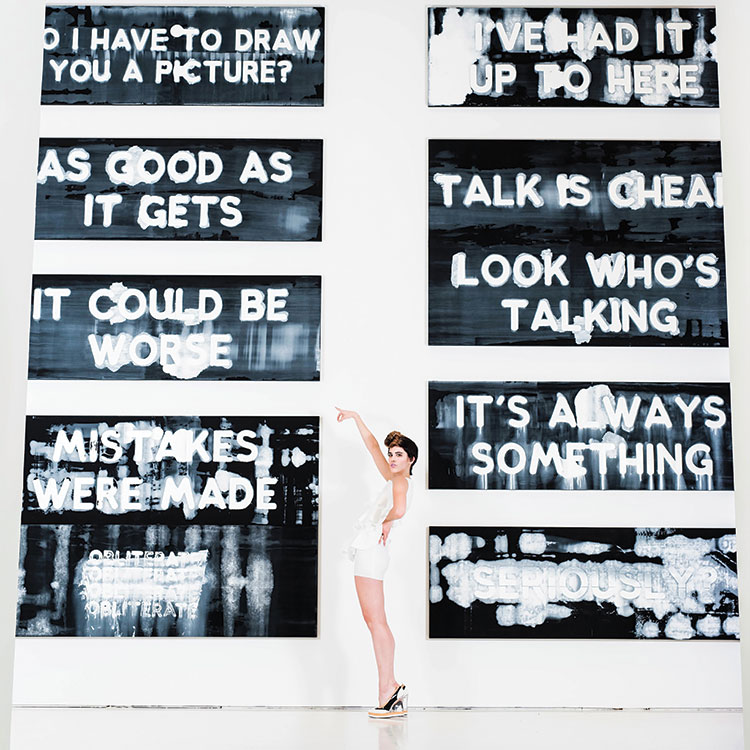 Mel Bochner
Exasperations, 2018
The Pittsburgh native has become famous for his sardonic, punchy word paintings. This series was created for the International and is comprised of white paint smashed thickly onto black velvet. 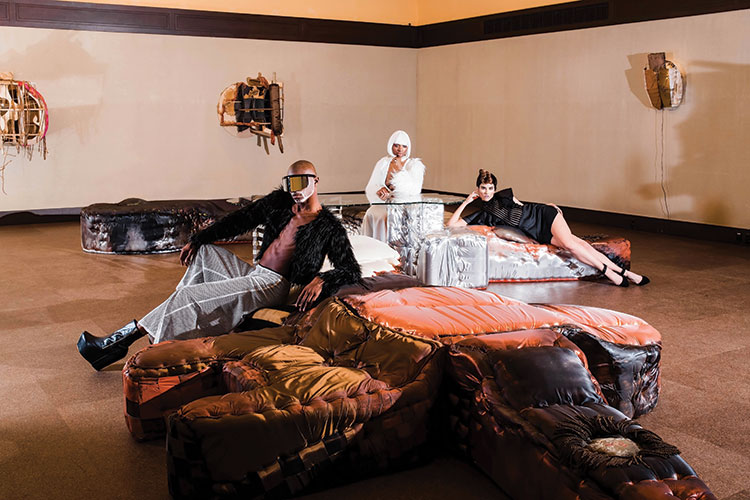 Jessi Reaves
Silver Pitfall, 2018
Known for her misshapen furniture, Reaves works with fabric, texture and form. She worked as an upholsterer where she found her passion for taking things apart and rebuilding them. Visitors to the International are welcome to sit on her work  from which they can see the rest of her installation within the Heinz Architectural Center.

During the day, Elaine Healy works at Jacob Ash Holdings, a clothing wholesaler in McKees Rocks that designs, sources and distributes gloves, headwear and accessories. It’s when she returns to her apartment/design studio in Friendship that her creativity takes another, more personal, direction. This year she has shown collections in Vancouver Fashion Week in the spring and most recently at Pittsburgh Fashion Week.

A graduate of The Art Institute of Pittsburgh, Healy’s education and training was in womenswear. Now her design esthetic has been morphing from luxury womenswear to a more gender-fluid or, as she refers to it, “non-binary,” style. “I draw a lot of influences from the Pittsburgh nightlife scene, drag culture, gay clubs and many of my friends who identify as trans or non-binary,” she says.

Silhouettes that can be worn by anyone, regardless of gender, are a focus of her work. While her looks might not be for everyone, she has a clear vision of her clients. “You might not wear this to the office, but if you want to make a statement, you’d wear this,” Healy says of her most recent work. An exaggerated-sleeved, faux-fur, baby-blue jacket is guaranteed to turn heads the next time you’re out on the town.

Healy’s collections, which have been sold at Luna Boutique in Sewickley, also can be purchased through her website.
elainehealy.com
vixenscream.etsy.com
shop.nineteenthamendment.com

Next: watch a behind-the-scenes video of the fashion shoot.

This article appears in the December 2018 issue of Pittsburgh Magazine.
Categories: Arts & Entertainment, From the Magazine, Hot Reads