Finding a Cause: Seven Pittsburgh Groups Making a Difference

The breadth of Pittsburgh’s homegrown and dedicated charitable and service organizations goes far beyond big-name foundations and local chapters of national nonprofit bodies.

From research and policy to street-level assistance and advocacy, locally run groups find ways to stretch dollars, apply resources and, in myriad ways, help. Here are snapshots of seven of the many local organizations worthy of your time, dollar and muscle. 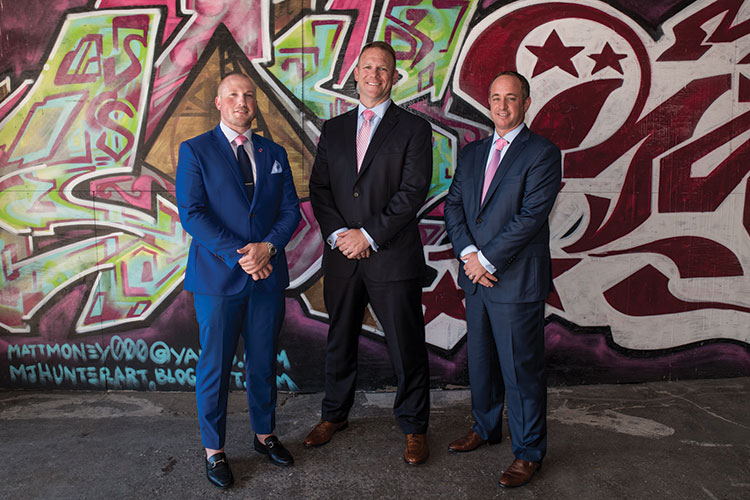 The Pittsburgh group already has raised more than $40,000 towards finding a cure. 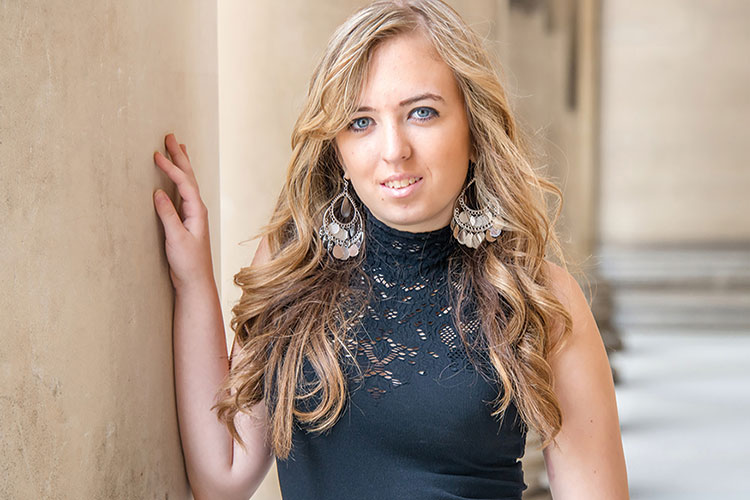 Political Foundation with Heart
The Caileigh Lynn McDowell Foundation honors a Woodland Hills High School student who died in April at age 17 after a catastrophic injury due to Crohn’s Disease.

Caileigh had an affinity for politics; her activism prompted Democratic presidential candidate Hillary Clinton to offer condolences to the McDowell family before a campaign rally at Carnegie Mellon University days after the teen’s death. Caileigh’s aunt, Lynn M. Banaszak, executive director of the Disruptive Healthcare Technology Institute at CMU, runs the foundation (caileighsfightsong.com), founded by the family, which focuses on transforming political, social and economic systems and institutions to create a kinder, more equitable and just society for all while also focusing on issues that affect teen girls.

The Women and Girls Foundation GirlGov program has created a Caileigh Lynn McDowell scholarship for a female student from Woodland Hills High School to participate in the program each year in Caileigh’s honor. —NS 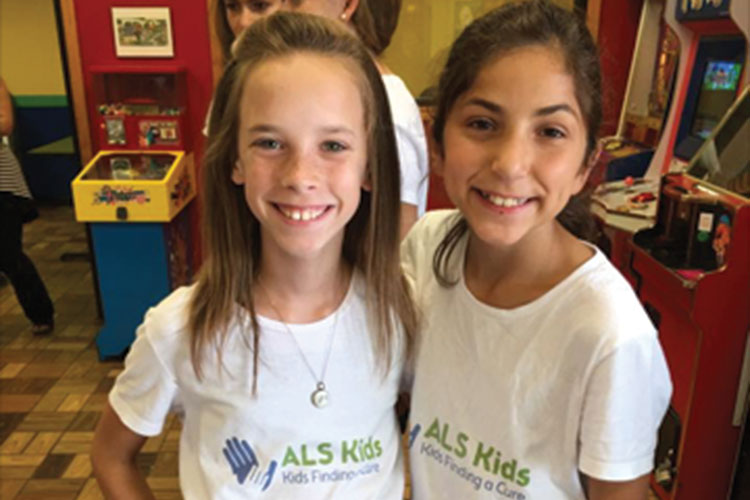 Spare Change
After her grandmother was diagnosed in 2014 with amyotrophic lateral sclerosis (or Lou Gehrig’s disease), 11-year-old Maeve Shaughnessy (left) of Ross Township was inspired to contribute to the fight to combat the disease.

Along with her classmate, friend and business partner Sydney Birchard, whose grandfather died from ALS, the student at St. Edmund’s Academy in Squirrel Hill formed ALS Kids (alskids.com).

The nonprofit organization provides the younger generation with opportunities to raise money for ALS research and patients through efforts such as mini-golf tournaments and the Change for Change campaign, which encourages participants to fill a jar with spare change and turn it in as a donation. Through this campaign, Maeve and Sydney have raised approximately $5,000 since beginning their work in May.

With each donation received, ALS Kids sends a gift — such as a coffee mug, a stress ball and a bracelet — to someone living with ALS while donating funding to support the ALS Association. —TM

Vibrant Landscape
After scanning the black arts landscape in the Pittsburgh region, representatives from two local organizations recognized a need for resources for artists producing works rooted in the black experience.

The Pittsburgh Foundation and The Heinz Endowments — which have partnered on grant programs for nearly 30 years — now support the Advancing Black Arts in Pittsburgh grant program twice each year; the program provides funding for local artists, residences and organizations. In the spring, 13 applicants were awarded $202,480 in grants.

Germaine Williams, senior program officer for arts and culture at The Pittsburgh Foundation, says the program is important given Pittsburgh’s history with jazz, theater and dance.

“When individuals look at the purpose, they’ll see how vibrant and active the black arts sector is in Pittsburgh,” he says. “It’s a powerful statement about Pittsburgh and the diversity you can find here.” —AM 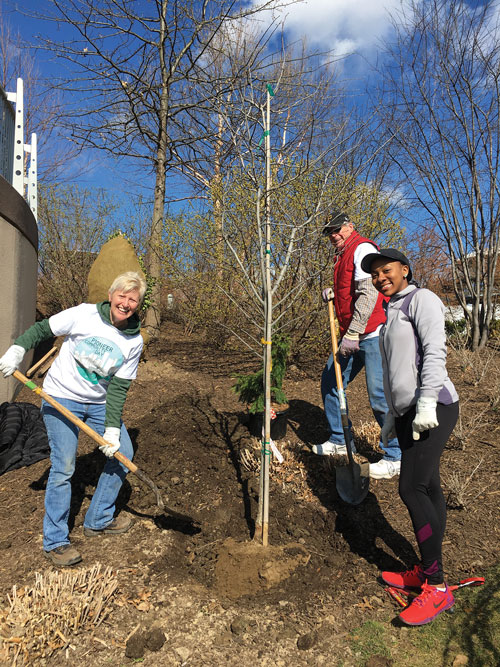 The Western Pennsylvania Conservancy wants the often-celebrated view encountered by motorists when they emerge from the Downtown side of the Fort Pitt Tunnel to be even more breathtaking.

Through the Pittsburgh Redbud Project — an initiative that began in spring 2016 — the WPC, Riverlife, the City of Pittsburgh and Colcom Foundation are collaborating to plant more than 1,000 redbud trees in the area where the three rivers meet and other open spaces Downtown. Evergreen trees also will be planted to promote tree diversity and health.

Redbuds are a native tree to the region and are the first to flower in the spring in hues of pink, white and purple, which means spring’s arrival to Downtown will be welcomed with bursts of color. —AM

Serving Those Who Served
Local veterans concerned about such issues as health care, housing, employment and education and more can worry a little less with the help of PAServes: Greater Pittsburgh, Pittsburgh’s first coordinated network of public, private and nonprofit organizations aiming to assist veterans with various opportunities and services.

PAServes: Greater Pittsburgh, created last year, is staffed by veterans and is hosted by Pittsburgh Mercy Health System — one of the largest health and human services nonprofit organizations in southwestern Pennsylvania; it also acts as a service provider for the program. PAServes: Greater Pittsburgh is part of AmericaServes, which works to establish local networks for veterans across the country. Among its many other providers are the American Red Cross of Western Pennsylvania, the Community College of Allegheny County and the Pittsburgh Vet Center.

Veterans can call or visit the website to inquire about services. To date, more than 975 individuals have benefitted from more than 1,200 requests. (855/838-7744, paserves.org)—TM

A Healthy Choice
People who rely on the Greater Pittsburgh Community Food Bank increasingly are finding more fresh produce available to them, thanks to Advance Choice, a new distribution program.

Traditionally, food banks have relied on individual donations as well as overstocked products passed on by manufacturers. That food was useful, but it didn’t always fit all of the dietary needs of the communities that received it. Advance Choice, with its focus on fresh produce, allows communities, local food banks and pantries to determine their needs, which the Greater Pittsburgh Community Food Bank then works to fill by using money from its operating budget to purchase the fresh produce they seek from distributors or local farms, says Beth Snyder, public relations coordinator for the Greater Pittsburgh Community Food Bank.

Advance Choice will enable families in the region to obtain more fresh produce, freeing up their budgets so that they can more easily make ends meet while also ensuring they are not opting for fast food or other cheap but less healthy items. The food bank will continue to offer shelf-stable foods as well.

Advance Choice launched in September 2015 in Fayette, Greene and Washington counties. Since then, Fayette County increased its fresh produce output distribution to families from 2,039 pounds in the previous year to 20,062 pounds; In Greene County, the distribution rose from no produce to 9,717 pounds, while the distribution in Washington County increased from 3,550 pounds to 15,128 pounds. “They’re getting the produce much fresher, much quicker — and we turn more of it over,” Snyder says. —TM