Find the Devil in Gallery D at the Carnegie International

The 57th Carnegie International is now open, and with it the premiere of Alex Da Corte's "Rubber Pencil Devil." 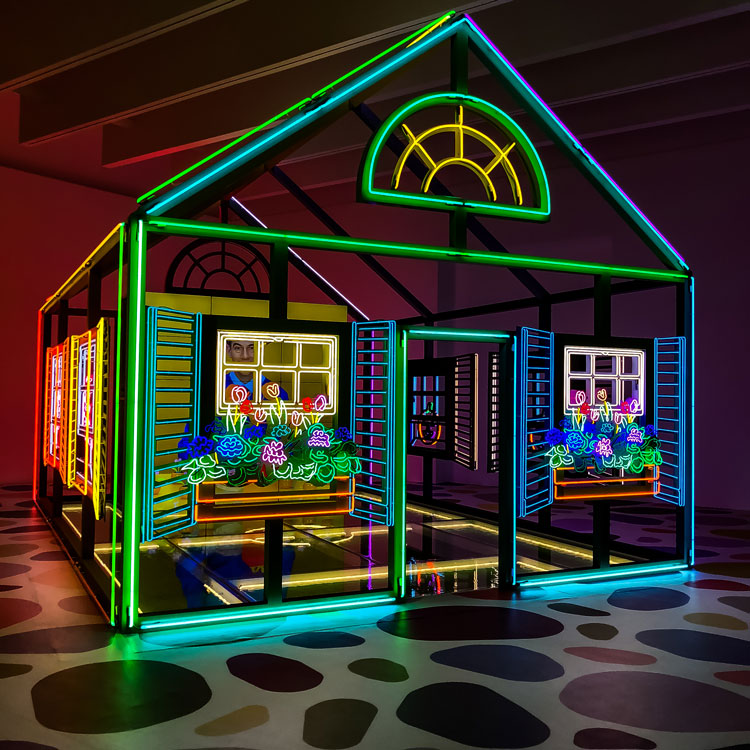 This is not the house that Jack built. This is the house that Alex built. But there are parallels between Jack’s imaginary digs in the 19th-century nursery rhyme and Alex Da Corte’s very real aluminum and neon abode at Carnegie Museum of Art. Actually, it would be duck soup to conjure up a hip, postmodern retelling of the cumulative-style poem: Alex’s place has a cat like Jack’s, no rat, but look for a character named Petra von Kant and additional denizens of this domicile, including Mister Rogers.

If the museum is apotheosized into a cathedral of culture and the International positioned as a worthy inducement for pilgrimage, then Da Corte’s creation could be considered the aedicula. As such, “Rubber Pencil Devil” might seem more suited to the Hall of Architecture, but International curator Ingrid Schaffner has sited it wisely in seldom-seen Gallery D. There, the installation — one singular sensation — is ensconced by four white walls with just one path for access and egress: a newly created portal, resembling a cloister arch, incised into a wall. This dramatic design gesture adds an element of suspense, mystery and surprise.

This minimalist structure — 16 feet high by 22 feet long by 16 feet wide — has been constructed with aluminum beams and supports that rise to a pitched roof. Da Corte calls it a “skeleton of a house.”

At first glance, the structure reminded me of Venturi and Rauch’s two “ghost” buildings in Franklin Court in Philadelphia, where Da Corte lives and works in the Juniata neighborhood. (His studio space occupies a former warehouse once used by Richardson Mints, an iconic Philly candy-maker.)

Da Corte acknowledges the Court reference and expresses his admiration both for the firm as well as for Benjamin Franklin. “I made a project based on A Man of Trouble Tavern,” he notes, referencing a Colonial watering hole — the landmark still exists — that was there in Franklin’s time.

A far cry from the Court structures in several ways, Da Corte’s house is embellished with a visually riveting palette of neon tubing, a material he adores, and which features in many of his Pop-like color-rich installations.

“I love neon,” he says, adding how he frequents a bodega in Philly just for its neon. Here, the lighting provides a welcoming, enticing pizzazz, like a theater marquee’s boogie-woogie lure. “They can come for the neon, and stay for the show,” he says of the visitors who will soon arrive.

Neon highlights the door and windows and shutters of the structure, which charms in a magic surrealism like a Cotswolds cottage, sans thatched roof, including neon posies for flower boxes adorning windows. These elements do double-duty, like picture frames, highlighting seasonal elements also fleshed out in neon: cupids, jack-o-lanterns, a wreath and candles.

Don’t expect a typical domestic interior either. It’s a single space, shrine-like, with a focal point at one end of the holy of holies: a bank of TV monitors “stitched” together, which, through computer magic, create and project a single large image. E Pluribus Unum! (Think: Ian Cheng’s installation at the museum earlier this year.)

Da Corte likens the mesmerizing construction to the monolith in “2001: A Space Odyssey.” Don’t expect Strauss’ “Also Sprach Zarathustra,” but the installation does have a musical complement composed by Anne Clark, Kid Congo and Austin Fisher.

What we’ll see at the monolith is a series, comprising a three-hour marathon, of 57 video vignettes created by and starring Da Corte in roles not only as Fraulein von Kant, but also as Sylvester the Cat and the Apple from Fruit of the Loom — not to mention a devil.

Look also for puppeteer Carrol Spinney and another legendary puppeteer, Fred Rogers, with a reprise of his puppets and the Neighborhood of Make-Believe.

Da Corte has special affection for this local and national treasure and watched Rogers’ show during the time he spent as a child in Pittsburgh with his family.

Has he seen the new movie, “Won’t You Be My Neighbor”? “Not yet” he replies, explaining that he’s holding off until after the premiere of the International.