Find Out How You Could Save the 10th Street Geese

Tim Kaulen painted “10th Street Geese” on the 10th Street Bridge more than two decades ago. He’s trying to make sure it stays there. 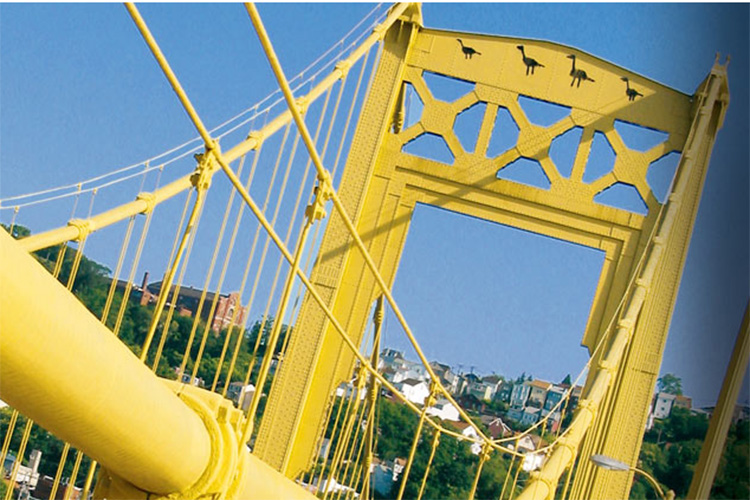 For the last 20 years, commuters and residents leaving Downtown via the 10th Street Bridge have been greeted by four black geese on one of the bridge’s towers, presiding over the entrance to the South Side.

Now, the artist who painted this familiar piece of street art is trying to ensure it isn’t painted over.

The 10th Street Bridge connecting the South Side and Downtown has been undergoing major renovations since summer 2017, including structural steel repairs and replacement of the bridge deck. The city is also repainting the structure.

Local artist Tim Kaulen is worried his iconic street work, “10th Street Geese,” will be erased as a result. Kaulen is also known for creating several other local street art and public commission pieces, such as the 2007 sculpture “Oee Great Blue” at the Children’s Museum of Pittsburgh.

Kaulen painted “10th Street Geese” in 1993 following the collapse of Pittsburgh’s steel industry. In an online petition he launched in late May asking the City to prevent the geese from being painted over, he writes that the artwork is “specific to Pittsburgh’s image of revitalization.” He also cites that it has been documented and recorded as part of Pittsburgh’s landscape.

“By preserving the artwork, and its symbolic gesture of resilience and the spirit of the local arts community, the City of Pittsburgh will be once again be recognized for its commitment to public art and expression,” he writes.

The petition is asking for 1,000 signatures and has so far garnered 555 supporters in the days since it was created.

Several supporters left comments explaining what the artwork means to them and why the city should make sure to preserve it. One supporter explained that she and her husband lived in the South Side when they were married and seeing the ducks always gave her “a sense of home.” Another supporter described the artwork as “one of many quintessentially Pittsburgh images that come immediately to mind when I think of this city.”