We’re in the middle of the always-excellent Three Rivers Film Festival, the 29th annual event put together by Pittsburgh Filmmakers. 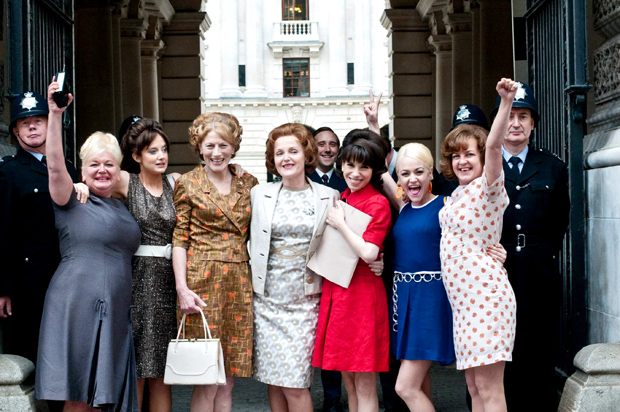 Made in Dagenham, showing at 8:15 p.m. Saturday at The Regent Square Theater via the Three Rivers Film Festival.

Photo courtesy of the Pittsburgh Filmmakers

Pittsburgh’s big film party may not be a major player in an industry sense, but it more than makes up for that with unique events and a diverse, engaging lineup of films. And it certainly helps that Filmmakers has at its disposal the three best movie theaters within a stone’s throw of downtown—the Harris Theater, the Regent Square Theater and the Melwood Screening Room.

I’ve always been a champion of film as part of a night on the town. In honor of the festival that many film fanatics consider an annual holiday, let me recommend a trio of films and where to head for drinks afterward:

FRIDAY: A TALE OF TWO SISTERS & A STIFF DRINK AT KELLY’S
If you’ve ever seen a Korean horror film before (and, let’s be honest, you haven’t), you know they are profoundly different from the startle-and-slash offerings from domestic directors. They are no less disturbing for that shift in tone, though. A Tale of Two Sisters is based on a folktale, telling the story of a divided family that faces something terrible after dark. It’s already the highest grossing horror film of all time in its native country, and is beginning to make waves here. After something this intense, you’ll need a real drink; make the short drive from the theater to Kelly’s Bar and Lounge in nearby East Liberty. Kelly’s is quickly becoming one of my favorite spots in town for traditional cocktails; check the feature, or order one of the specialties. Another day, come back for the sublime mac and cheese, but something tells me you won’t have much of an appetite after the film. (A Tale of Two Sisters, 9:30 p.m. Friday and 100 p.m. Saturday. Melwood Screening Room, 477 Melwood Ave., Oakland. $9. Info: 412/394-3353, 3rff.com. Kelly’s Bar and Lounge, 6012 Penn Circle S, East Liberty. Info: 412/363-6012)

SATURDAY: MADE IN DAGENHAM & BEER AT THE MAP ROOM
My Oscar guys still tell me that Made in Dagenham has an outside chance at a few nominations this year; whether or not it has stars claiming “It’s an honor just to be nominated,” it’s still worth your time. The film covers a 1968 British workers strike over equal pay issues, but it’s far from a serious drama; the BBC called it “joyful and uplifting,” and considering the typical pessimism of Brit film reviews, I’m inclined to believe them. Director Nigel Cole flopped with his first American film, the Ashton Kutcher/Amanda Peet snoozer A Lot Like Love but treaded similar ground with the enjoyable Calendar Girls. You’ll be at the perfect Regent Square Theater, and just about any bar within striking distance is a good choice. One of my favorites for a quiet outing, though, is The Map Room, just across the street. A fine beer selection should be your first stop, but the relaxing, welcoming nature of the place will make you want to linger all night. (Made in Dagenham, 8:15 p.m., Saturday. Regent Square Theater, 1035 S Braddock Ave., Regent Square. $9. Info: 412/394-3353, 3rff.com. The Map Room, 1126 S Braddock Ave., Regent Square. Info: 412/371-1955)

SUNDAY: LITTLE ROSE & A BOTTLE OF WINE AT LONG ASH CLUB
I really want to see Little Rose because it’s not often that a one-paragraph description of a film brings me near tears. The festival has partnered with the Polish Cultural Council this year to highlight that nation’s output, and Little Rose took the 2010 Golden Lion (Poland’s equivalent of a Best Picture Oscar.) The film is a fictionalized version of a true, heartbreaking story—many years after the death of Polish writer Pawel Jasienica, it was revealed that his wife, whom he loved deeply, was actually a communist agent, spying on him and his friends throughout his life. Contemplate this mind-blowing story over a bottle of wine at the Long Ash Club on Penn: Perfect atmosphere, a great selection of wine and scotch, cigars for those so-inclined and the easiest way to feel like a high roller outside of a lucky night at the casino. (Little Rose, 7 p.m. Friday and 2 p.m. Sunday. Harris Theater, 809 Liberty Ave., downtown. $9. Info: 412/394-3353, 3rff.com. Long Ash Club, 711 Penn Ave., downtown. Info: 412/281-6290, longashclub.com)