When Pittsburgher Roger Wood created “Here We Go,” the Steelers’ No. 1 anthem, in 1994, he couldn’t imagine its blockbuster success. 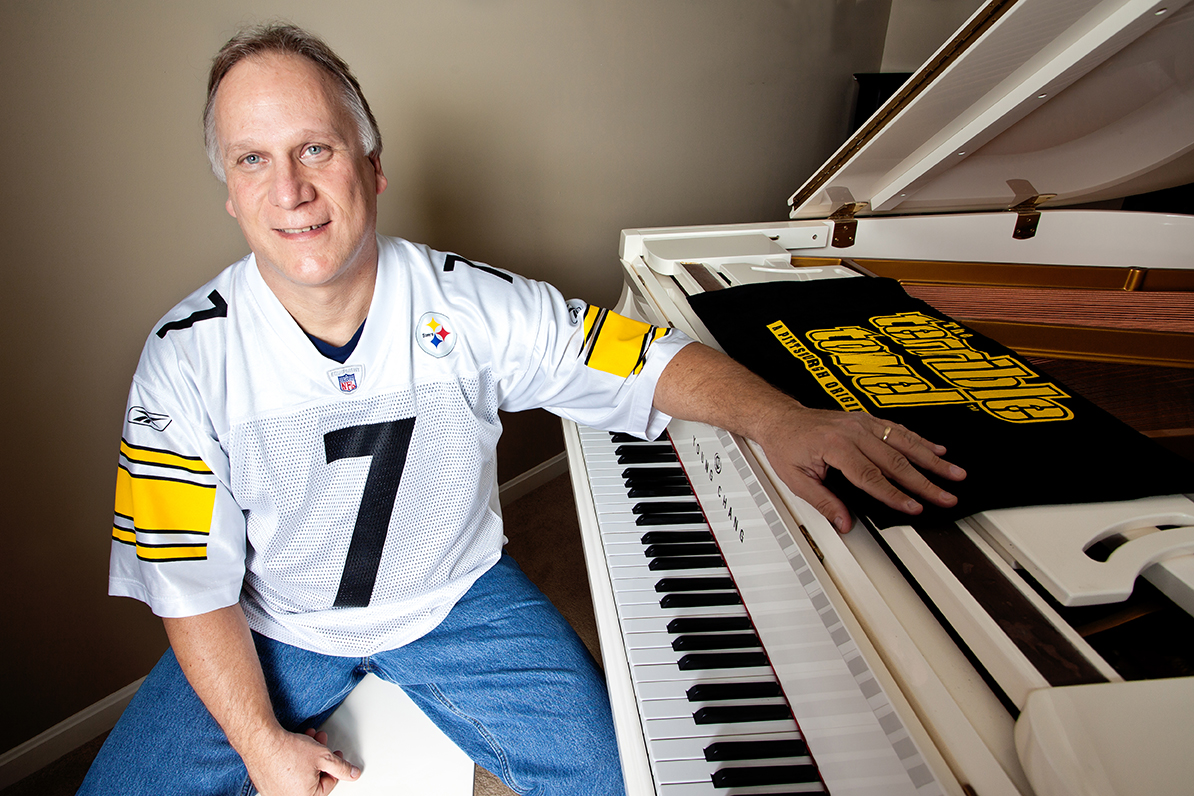 When the Steelers make it to the post-season, the fight song “Here We Go” is suddenly everywhere — an aural Terrible Towel. With its funked-up bass line and craggy, distinctly local vocal, the good-natured ditty sucks you in and compels you to chant along. The whole thing feels organic, as if it were willed into being by the collective consciousness of Steeler Nation. But it’s the work of Roger Wood, a fan who wrote and recorded it in a burst of inspiration in 1994. Eighteen years and four Super Bowls trips later, “Here We Go” remains the most popular Steeler song of all time.

Wood, 49, is a professional real-estate investor, but “Here We Go” has provided him with something like a second career. He performs the song at post-season pep rallies and re-records it when necessary, updating the name-dropping lyrics as players come and go, and jettisoning quaint relics such as  “Cowher Power” and “One for the Thumb.” Wood distributes the song on his own and also stars in the music videos. Internet downloads have replaced his original National Record Mart cassette-tape versions, but song sales spike (predictably) when the Black and Gold are playoff-bound. Wood has sold almost 250,000 copies of the song so far.

What inspired you to write “Here We Go”?
I’d played music for a long time, but not professionally. In ’94, the Steelers had a great year and made it to the AFC Championship game against San Diego. So around that time, I was watching the Red Hot Chili Peppers on MTV, singing, “Give it away, give it away, give it away now…” And I just thought, Here we go, here we go, here we go, Steelers … So I sat down at the keyboard, and it just came out of me — like somebody was telling me what to write. It only took me about 20 minutes. And the bass part is kinda like the Penn State fight song, with that offbeat. I was subconsciously feeding off things I’d heard. The lyrics came quickly, too.

When did you know it was going to be a hit?
Not at first! I recorded it at home with my wife, Wendy, and a couple friends, and we thought we’d hear it on the radio once or twice — maybe. But I wanted to make a better quality version, and a buddy from ’DVE knew [producer and musician] Rick Witkowski at Studio L. I called Rick and said, “I’ve got this song. Can we come down and record it?” He was really busy — and I wasn’t anybody — but I overnighted him the tape. Rick called the very next morning and said, “Come down Sunday. You have a hit.”

You then sent the song to radio stations, and within days, it was playing nonstop.
Yeah, and National Record Mart and Phar-Mor pharmacies each wanted 1,000 copies. I couldn’t believe it. I scraped together about all the money I had and made those cassette tapes. I remember that Friday, dropping off copies at Phar-Mor stores and seeing lines of people waiting because they’d heard it was going on sale. By noon on Saturday, all 2,000 copies had sold out.

How do folks react when they find out you’re the guy who wrote it?
People kinda stare at you — they don’t believe you. Everyone knows the song, but they don’t realize someone actually wrote it. The first year, I was at that AFC Championship game at Three Rivers. I’m in the men’s room and the guy next to me was singing, “Here we go, here we go!”  — he’d had a few. I said, “You like that song?” He said, “Yeah, that song’s grrreat!” I said, “I wrote that.”  He turns, gives me this look and goes “Shhhyeahhh, right!”  Since then I haven’t really volunteered that information.

Why do you think the song’s still so popular?
Because it’s really more of a cheer. It stays with you —  it’s catchy, like a jingle.  And it puts you in a Steelers state of mind during playoff season.

The latest video features your wife and your sons.  So is “Here We Go” a family affair?
Yeah. Wendy’s really talented, and so are my sons, Ryan and Dylan. They’ve got a band, Call To Attraction, and Dylan plays drums in another band that signed a deal with Atlantic Records.

So back in ’94, was your wife a bit skeptical about risking your money on “Here We Go”?
We both were! It was all I had at the time —  $5,000 or something. But that just shows you: Sometimes you’ve gotta take a shot. I would rather take a shot and lose than not take a shot at all.

This article appears in the November 2012 issue of Pittsburgh Magazine.
Categories: Arts & Entertainment