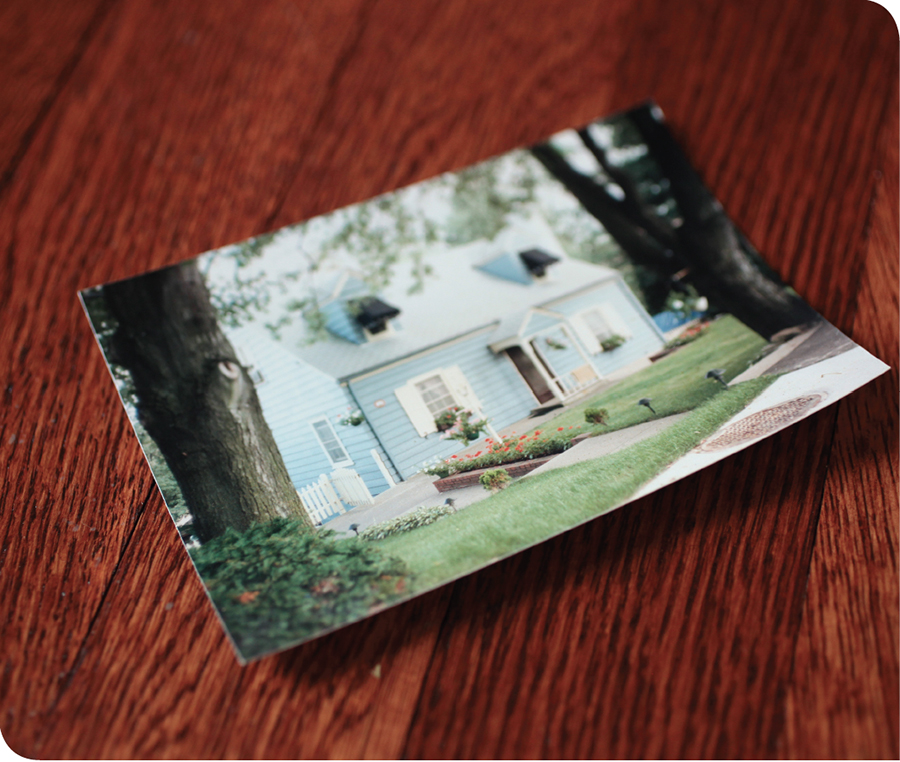 Although foreclosure listing website RealtyTrac recently deemed Pittsburgh one of the top five most-lucrative metropolitan areas in the country for house flipping, some homebuyers are less interested in turning a profit and more interested in restoring a piece of Steel City history.

“For many people, when they find the right house it’s like meeting that perfect someone. They fall in love regardless of the condition,” says Lawrenceville resident and Realtor Sandy DeTemple.

In Lawrenceville, Edgewood and Upper St. Clair, we found homeowners working to bring pieces of Pittsburgh’s residential past into modernity.

Keeping It Local in Lawrenceville 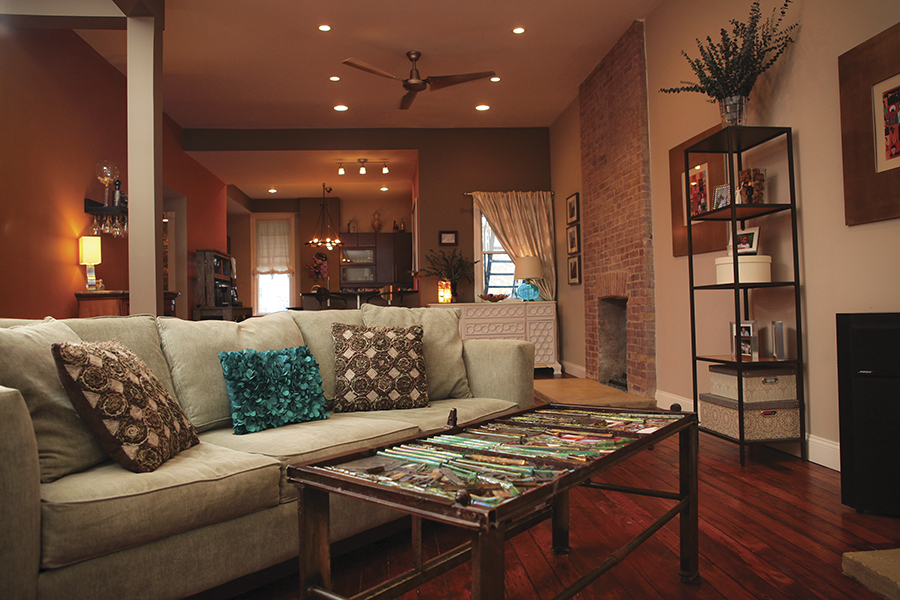 Tamala Johnson-Oncea and Michael Oncea moved into Lawrenceville as renters in September 2009. When they decided it was time to buy a house, they looked in many up-and-coming Pittsburgh neighborhoods, including the Mexican War Streets and Bloomfield, but they kept coming back to Lawrenceville. They loved the access it provides to the rest of the city and the ease of walking to restaurants and shops.

In 2011, they made an offer on a house. They knew the property would require a lot of rehabilitation work, but they pushed forward until the deal fell through. Then they saw that a 3,500-square-foot home on 45th Street had just been put on the market.

“Both Mike and I were sick to our stomachs about the other house because it just didn’t feel right,” Tamala remembers. “We never had that feeling with this house; there was no more doubt.” 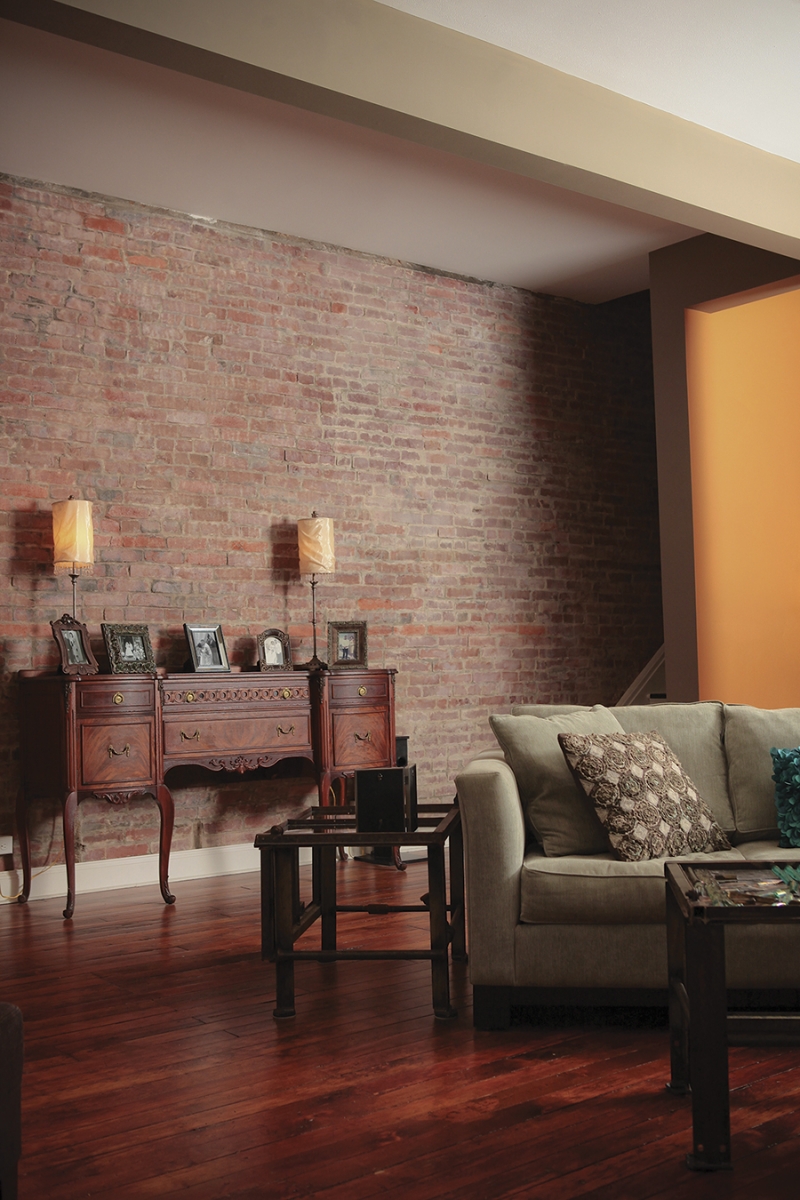 The couple made an offer immediately and told the homeowners to stop renovations that were underway but not to their taste. They planned to restore the home, which was built in the 1890s, while bringing the layout and several other aspects up-to-date for modern living.

They moved into the home in July 2011 and started peeling back layers, exposing the original brick walls and refinishing the main level’s pine flooring. The more they tore down, the more they found original gems, including trim and two additional fireplaces.

“You have to be ready for imperfections,” says Michael. “Not everything is level and smooth, but that’s exactly what we wanted. You can’t replicate it.”

As they continue to restore the home, one of their main priorities is to source materials locally as much as possible. They ran into good luck when they found an 1890s door at Construction Junction; it was an ideal replacement for the steel entryway the former owners installed, even though it required modifying plans for the foyer. They’ve also worked with local glass artist Meeghan Triggs on backsplashes for the kitchen and bathrooms. 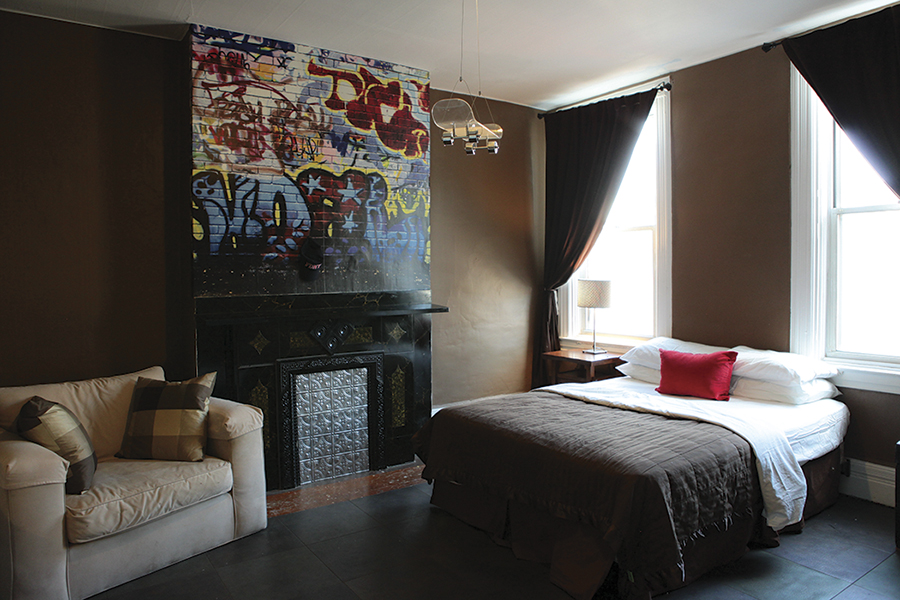 As they renovate, the couple has taken care to make the 45th Street home an eclectic mix of period-perfect touches and modern convenience. For instance, the first floor living space is all open-plan, but many of the finishes are original or accurate for the 1890s, down to the kitchen’s slate countertops.

When asked if they would take on another historical restoration, the couple answered with a definitive “No!”

For now, they’re enjoying all of the projects yet to be completed in the home, as well as the anachronistic style of living they’ve created for themselves.

“I’m sort of obsessed with the 1890s now,” says Tamala. “I wish the house could tell me all of its stories.”

Southern Living in the Rust Belt 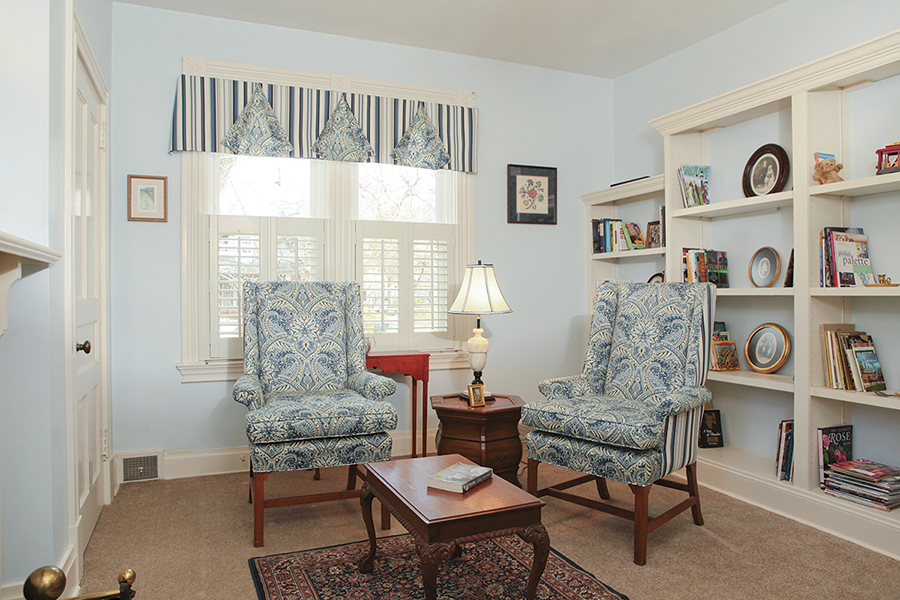 Sharon Danovich says she hates the word “flip,” although she has invested in several properties in various Pittsburgh neighborhoods. Rather than trying to modernize properties as quickly and cheaply as possible, she says she prefers to work with what exists in a home and restore it to its period glory.

This love of a good project extends to her own residence, a 103-year-old Charleston Single on Locust Street in Edgewood. Until five years ago, she and her husband, John Lupone, who is also her business partner, lived around the corner in a Tudor they restored. Then they decided it was time to move, and they found a place within two weeks.

“I went to [an] open house [at the] Locust Street [address] because my coffee maker broke, and I needed my morning caffeine fix,” says Danovich, explaining how she stumbled upon her current residence while in search of coffee at the open house held by a Realtor friend. “I called John and said, ‘I found your house.’”

They made an offer that evening. 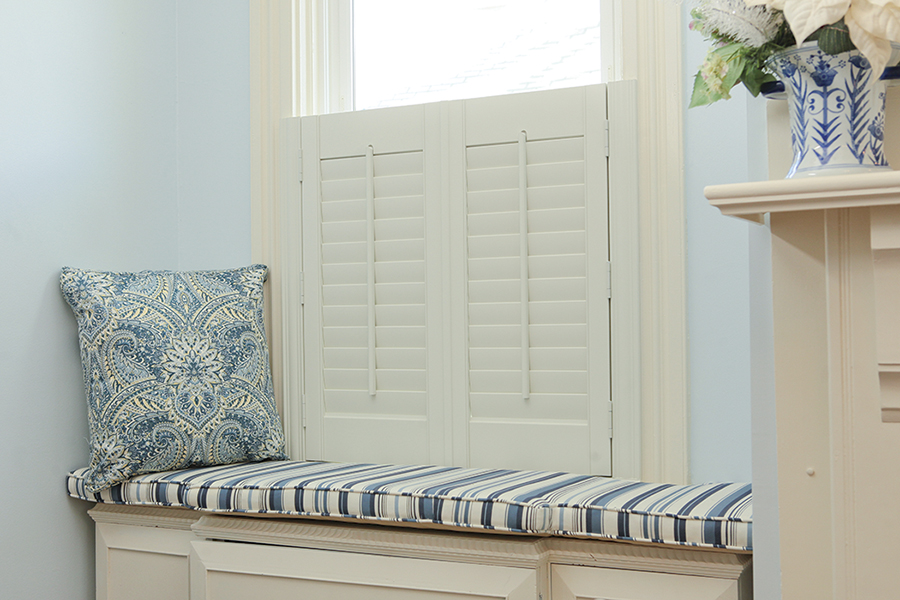 The 3,824-square-foot home reflected a more federalist style, but Danovich, a design-history buff, saw through to the home’s Southern charm. Inspired by properties she’d seen in Colonial Williamsburg and her travels in the Carolinas, she restored details such as original trim and molding. She also added period- and region-specific touches, such as window shutters and French doors.

One standout aspect she incorporated is a mantel she found at Construction Junction to replace a flat brick fireplace from a 1960s addition. The cherry-wood piece came with verdigris marble, and she added Baldwin brass doors and additional trim to make it more historically accurate and blend into the rest of the house’s finishes.

The mantel is only one example of the lengths Danovich goes to in order to furnish her home in period-perfect accents. 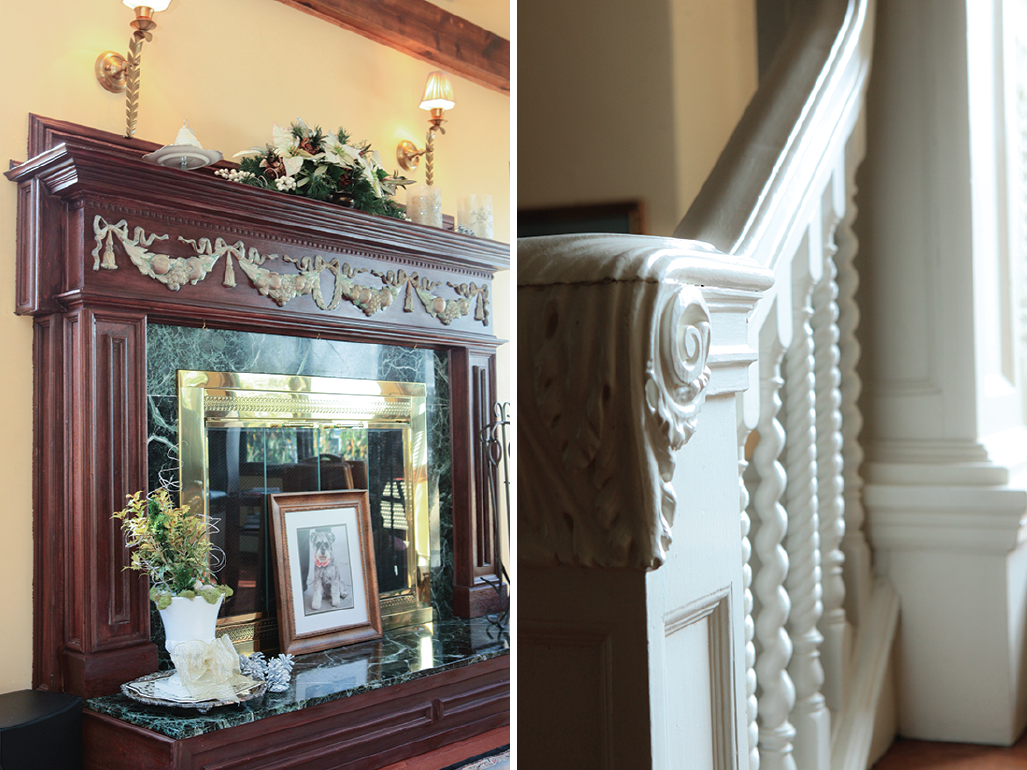 “Only four pieces in the entire house were bought at a furniture store,” she says. She favors antiquing and shopping at thrift stores around Pittsburgh and elsewhere when she travels. Thriftique in Swissvale and Mahla & Co Antiques in the Strip District are two of her favorite local shops.

Although she loves to work within the style of a historical period, Danovich insists that her homes never become too stuffy or suggest a museum.

“It’s important to have calming [colors], an ease of movement and a lot of light,” she says, noting this is the way to make a historical home more modern.

Though there is no insurance against her itch for a good project, Danovich says she believes she and Lupone have found their forever home on Locust Street. 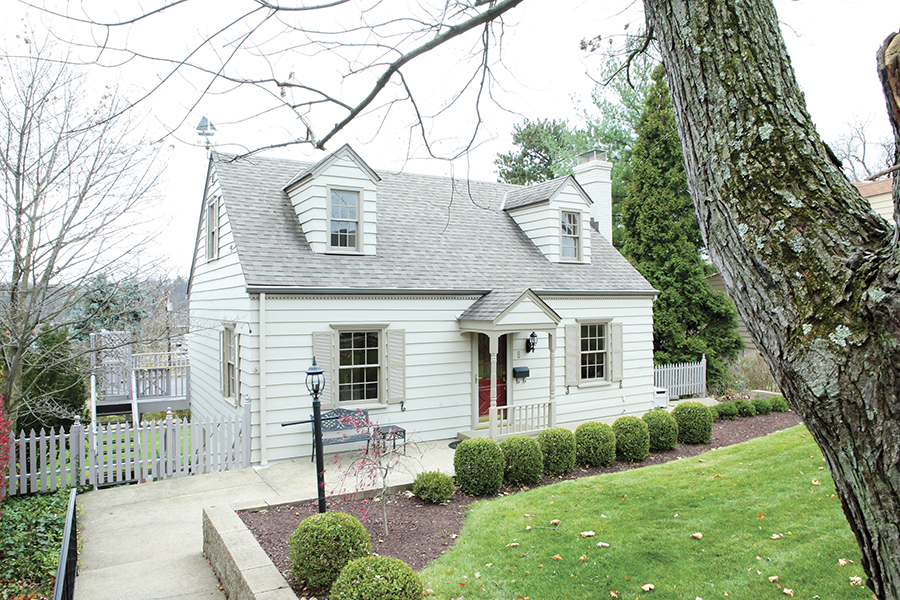 When Jay Lynch’s mother was diagnosed with Alzheimer’s disease at age 86 and moved into an assisted-living facility, her son knew he would need to sell his childhood home on Mitchell Drive. His parents had lived there since 1957, when they purchased it for $15,400.

“We could have just stuck a ‘For Sale’ sign in the yard,” says Lynch, “but I really wanted to honor the house [and neighborhood] I grew up in.”

The 1,265-square-foot Cape Cod house was built in 1947, in a time when craftsmen still built many homes and gleaned pride from including such quality features as plaster walls, oak flooring and multipane windows. Lynch says he recognized that the home needed some repairs and updates before it could be put on the market, but he wanted to maintain as much of the original workmanship as possible. He enlisted contractor Sal Catalucci to help him restore and modernize the home.

One of the most painstaking projects was restoring the structure’s original windows. 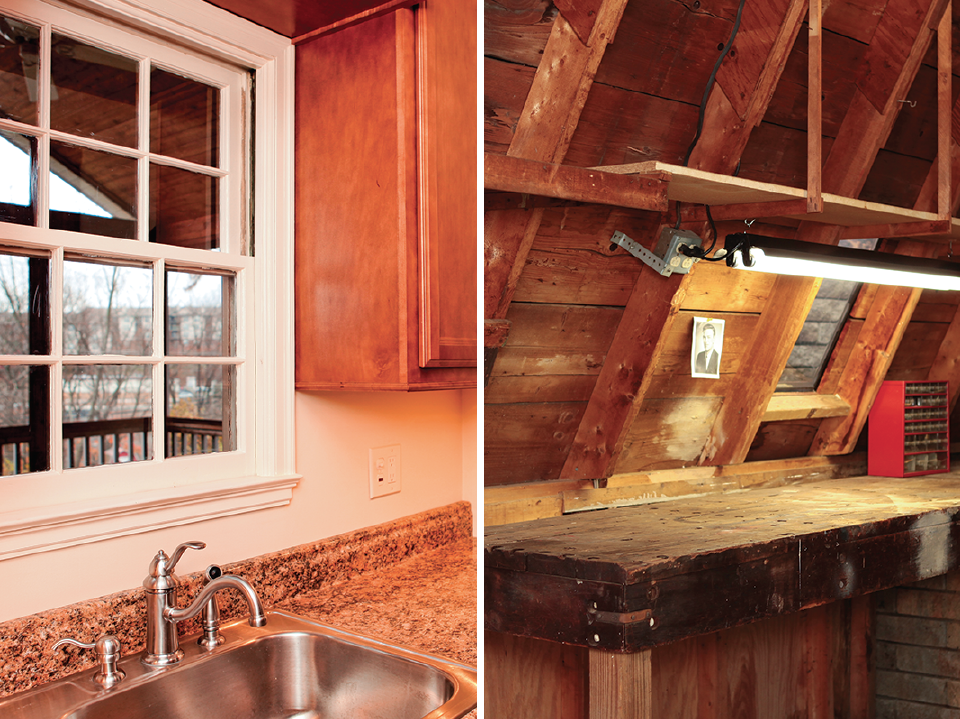 “I told Sal at the beginning of the project that I thought we should replace the windows, but he told me no,” Lynch recounts. “He told me that the amount of light the original windows [admit] into the home and the techniques used to glaze and seal them can’t be replicated today, so his team set to work refinishing and restoring all of the wooden frames.”

Another true-to-period detail Lynch decided to keep was the layout of the residence, which is decidedly more segmented than today’s popular open floor plans. Opening up the galley kitchen and knocking down walls that divide rooms would have changed the character of the 66-year-old home.

Some updates, though, were too practical to pass up. Plumbing and electricity in the kitchen, bathroom and laundry room were all brought up to modern standards to accommodate appliances such as a microwave and dishwasher. All of the old cabinetry was replaced with custom-designed maple cabinets that reflect the colonial style but add such conveniences as soft-close drawers. 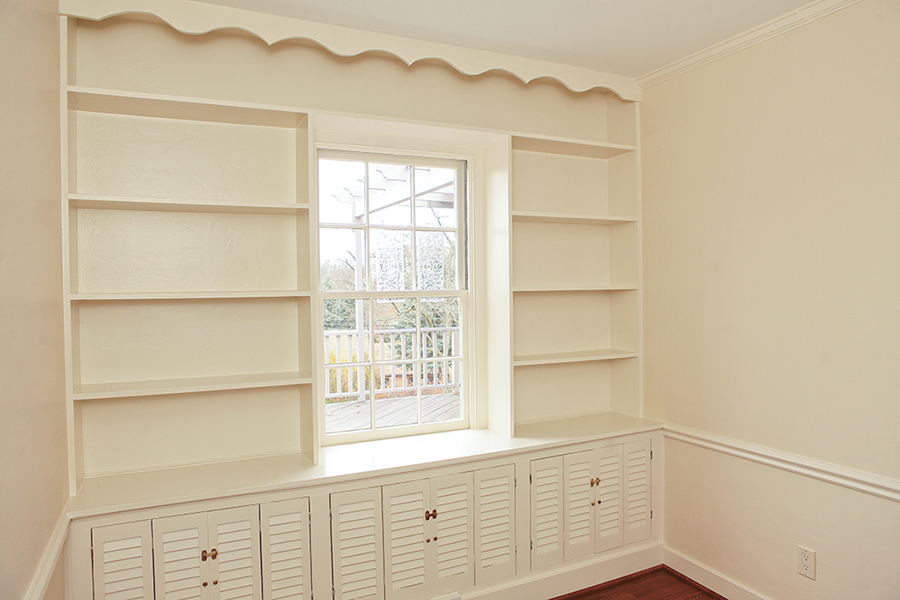 Though it was difficult to peel back the layers of wallpaper and paint that made up the home’s history and his own, Lynch sees the work he put into the house on Mitchell Drive as an investment in the future of the neighborhood. He says he loved growing up there, and his kids loved to visit. He imagines a whole new generation creating memories in the tenderly restored home.

“We’re very proud of the result,” says Lynch. “The work was rewarding because I knew the house and I wanted the outcome to be top-notch.”

At press time, this house was available for sale. See the listing at zillow.com.

This article appears in the March 2014 issue of Pittsburgh Magazine.
Categories: From the Magazine, HOME + Design