Daniel Sprong, the Penguins’ rookie winger, has made quite a journey for an 18-year-old. 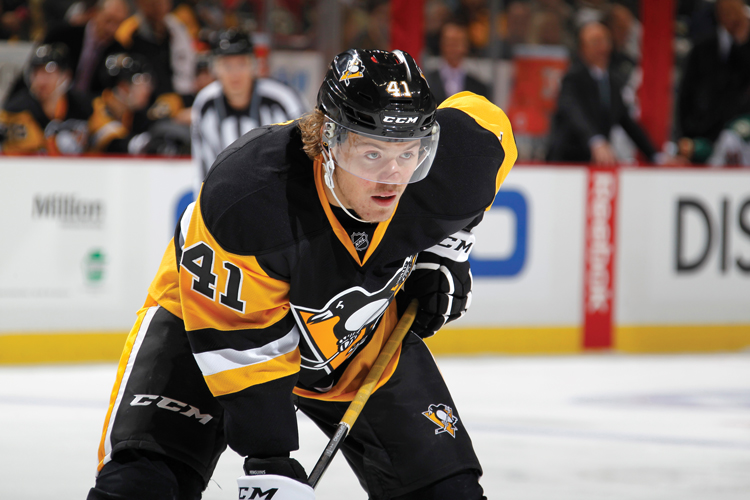 Editor's Note: On Dec. 19 — after this story appeared in our print publication — the Penguins sent Daniel Sprong back to his junior hockey club, the Charlottetown Islanders of Prince Edward Island, Canada. He remains a strong prospect and likely part of the Penguins’ future.

There are a few things about Penguins rookie winger Daniel Sprong that might not endear him to Pittsburgh.

He isn’t a member of Steelers Nation. “I’m a Patriots fan,” Sprong says, smiling at the reaction he knows that confession might provoke. “I’m a Tom Brady supporter.” So … the whole Deflategate thing? “No. Didn’t happen,” he says.

The Pirates? Sprong attended a couple of home games before Penguins training camp opened and loved the venue. But … “I’m a Yankees fan,” he says.

Off-ice sports allegiances notwithstanding, local fans might find a lot to like about Sprong. At just 18, he made the Penguins roster out of training camp. The Penguins — who previously had traded away their first-round pick in June at the 2015 NHL Draft — made Sprong their second-round pick, but he has acted like a first-rounder.

“The fact that he has stuck with a good team as an 18-year-old puts him ahead of [a lot of] those other guys [taken in the first round],” Penguins General Manager Jim Rutherford says.

The 6-foot, 180-pound Sprong has shown flashes of skill and poise that project him as potentially a player for one of the top two forward lines. Sprong had two goals, no assists playing in 16 of the team’s first 28 games, mostly as a fourth-liner. As the Penguins offense struggled to score early in the season, fans began to clamor for Sprong to get more ice time. That was before Mike Johnston was fired as coach Dec. 12 — giving Sprong a fresh opportunity under new coach Mike Sullivan.

Rutherford — who will need to decide at the midpoint of the season whether to return Sprong to the junior level or shorten his path to potential free agency by a year — says even when Sprong is out of the lineup, he benefits from the pace of NHL practices and the experience of being in the top league. Sprong says every chance he gets, he watches, listens to and learns from his high-end teammates, including center and team captain Sidney Crosby.

“On the ice, he plays the game that it is played now by the top guys,” says Penguins center Matt Cullen, a frequent linemate of Sprong’s. “He’s got a really high-level shot. He sees the ice as far as opportunities to jump and create things.”

Getting to the NHL has been a lifelong pursuit for Sprong, but his journey involved an extraordinary act of support from his family. His father, Hannie, played hockey in the Netherlands — not typically thought of as a hockey hotbed — and Sprong took to the sport very early. When Daniel was 7, Hannie and Sandra Sprong moved the family across the Atlantic to Montreal so Daniel could have a better chance to excel. What better country than Canada, eh?

Does that make Sprong a golden child?

“I don’t know what people think,” says Sprong, who is fluent in English and French along with his native Dutch. “I know close friends of mine, they couldn’t believe it. [They were] surprised but also very happy that my parents gave me that opportunity … My parents wanted to give me a chance to do something with my life that I wanted to do. I will never forget that. I can’t thank them enough for actually giving me the chance.”

​Sprong still is adjusting to NHL life. He lives in a hotel, often carpooling with slightly older teammate Adam Clendening, who lives in the same place.

“He’s 18, right?” says Clendening, a 23-year-old defenseman. “It’s not the real world yet. It’s all coming pretty quickly. He might be just a little shocked, maybe a little bit of culture shock.”

It’s not anything Sprong can’t handle. “He’s very mature — not only from an on-ice point of view. He was preparing for this opportunity for many years. Because of that, he has a very strong personality,” Rutherford says.

This article appears in the January 2016 issue of Pittsburgh Magazine.
Categories: Penguins