PPG is renovating 16 stores it acquired from two independent paint retailers in 2014. 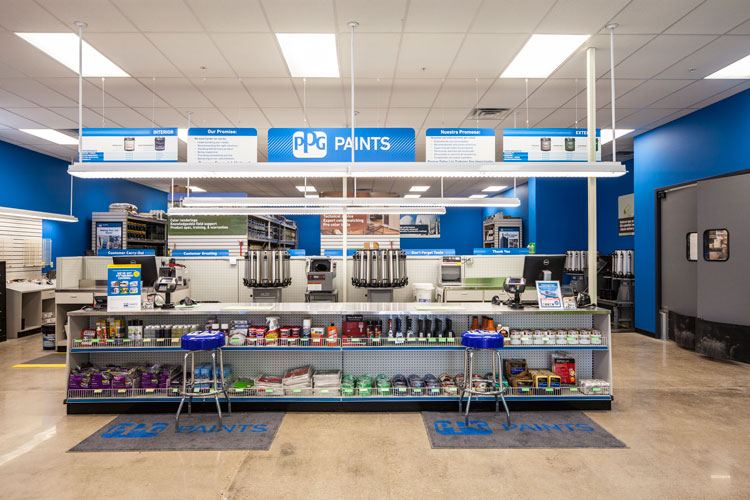 Your hometown paint store is about to get a new look. On July 28, PPG Industries, which has its global headquarters in Pittsburgh, announced the grand opening of PPG Paints stores in the Pittsburgh area.

As part of the rebranding, PPG is renovating 16 stores it acquired from two independent paint retailers in 2014. The changes include expanded store footprints, customer-friendly service counters and advanced color selection tools.

One of the company’s coolest new innovations is the high-tech PPG Color Work Station. The 42-inch digital touchscreen at the workstation allows users to virtually paint images of rooms and then share the “painted” images via email with friends and family, because who doesn’t want Mom’s opinion on the new color for the den?

The introduction of the new store brand in the Pittsburgh market is part of a national rollout of PPG Paints stores. The 635 company-owned stores across the United States now will operate under the PPG Paints brand name, according to officials.
(PPG Paints is available at several Pittsburgh area locations, ppgpaints.com/pittsburgh)

Architect Nathan St. Germain is passionate about sustainability. So much so that the owner of Sewickley-based Studio St. Germain — which he founded with his wife, fellow architect Aimee St. Germain, more than a year ago — is a Certified Passive House Consultant. “The focus of our practice is sustainable design,” he says.

“They use 80 percent less energy than the average house,” he says. “I think the utility bills are less than $1,000 per year.” St. Germain also is a member of the board of directors for Passive House Western Pennsylvania, an organization dedicated to lowering energy use in buildings.

Pittsburgh, he says, is starting to earn a reputation as a hotspot for passive houses. Recently, ACTION-Housing Inc., which specializes in affordable housing, opened the first passive house in Western Pennsylvania in Heidelberg. Another passive house is underway in Squirrel Hill.

Home fashions store HomeGoods will debut its newest location at 8 a.m. Sunday, Aug. 23 in Cranberry. The first 1,000 shoppers at the store will receive a free reusable HomeGoods shopping bag. This will be the fourth HomeGoods store in the Pittsburgh area.
(Cranberry Mall, 20111 Route 19, homegoods.com)

This article appears in the August 2015 issue of Nest.
Categories: Nest