How the globalized worlds of FarmVille and Mafia Wars were created by brainiacs from our own backyard. PLUS, your chance to win FarmVille cash from Pittsburgh Magazine!

Justin Cinicolo is partly responsible for building an empire of more than 80 million farmers and 25 million mobsters. But he wasn’t trained by Mao or Gambino. His education started right here at Carnegie Mellon University, where he studied Human Computer Interaction and Entertainment Technology from 2001-2007.

Cinicolo, 28, is one of more than 15 CMU graduates who work for the San Francisco-based tech company Zynga, creators of social media games like FarmVille and Mafia Wars. More than 230 million people play Zynga’s games every month—the equivalent of about 3,000 football stadiums full of fans.

FarmVille, Zynga’s most popular offering, is a simulation game where players manage a virtual farm by harvesting crops and raising livestock. Played mostly through Facebook, users can invite friends and family members to be their “neighbors” on the digital pastures, where seeds, tools and labor can be shared. In addition to earning virtual cash from a good harvest—which can be reinvested in, say, a better tractor or more seeds (decisions, decisions)—users can also buy special items or gifts for friends with real money. (For your chance to win FarmVille Cash from Pittsburgh Magazine, click here.)

Since its release in June 2009, FarmVille has acquired
more than 82 million active users. That’s more than
the population of Germany.

Cinicolo, who was born in DuBois and spent part of his childhood living in the South Hills, started computer programming in the seventh grade on the monochrome screen of an Apple II series in his school’s computer lab. “I started by programming a workable calculator, but I made it so that a hippo would walk across the screen and munch the numbers. You do weird stuff in programming class,” Cinicolo laughs. 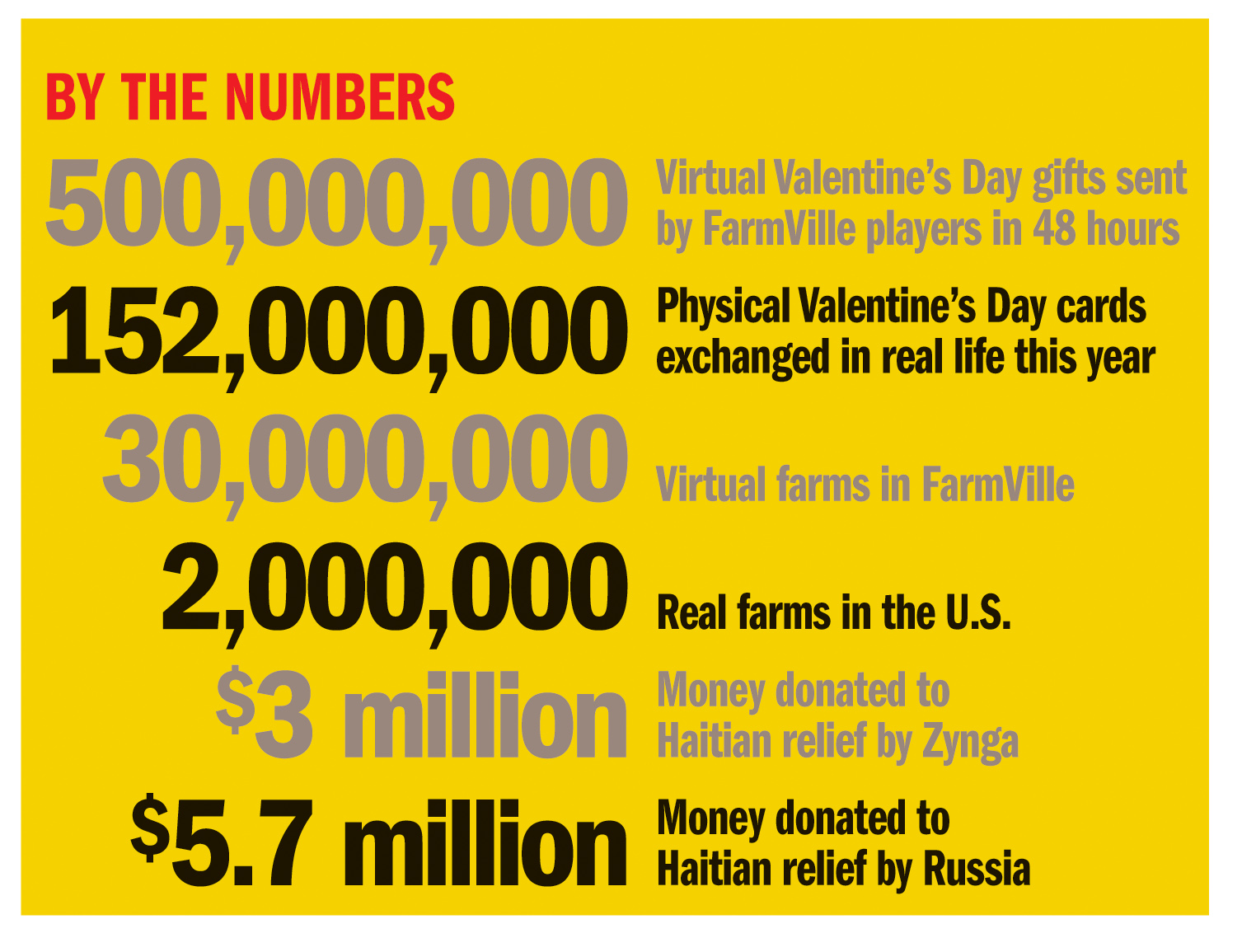 Fresh out of college in 2008, he joined a little-known start-up called Zynga, where he led the development of the Godfather-inspired game Mafia Wars. Now a general manager at the privately held company, which is valued between $3-5 billion by some analysts, Cinicolo is living his childhood dreams.

“We had a family Nintendo since the time I was four years old, and it was the one thing in our house that always brought the family together,” says Cinicolo. “It’s a joy to be working for a company that connects people and families across the world.”

In January, Zynga’s mega-community took FarmVille’s philosophy of “help thy neighbor” to a whole different level. In just five days, players of Zynga’s games raised $1.5 million to support relief efforts in earthquake-ravaged Haiti by purchasing special items within the game. Then this spring, FarmVille players raised an additional $110,000 through the purchase of special edition sweet yam seeds, which will be used to build a school for displaced Haitian children.

So much for “just a silly game.” The power of Zynga’s community to harness social good seems almost limitless.

“It’s been quite a roller coaster ride, especially considering the average age of our employees is around 25,” Cinicolo reflects. “It’s a bunch of young, talented folks who are ready to make their mark on the world and do a little good at the same time.”

Are you a proud FarmVille farmer? Send us a shot of your farm and you could win a $10 FarmVille gift card! We’re looking for creativity, so send us your best. Even if you don’t win, your farm might be featured on our site.

Not sure how to take a screenshot of your farm? Check out Zynga’s instructions here.

Once you have your screenshot, email it to us here. Be sure to include your name, address and any additional comments.

We look forward to seeing your farm!

This article appears in the July 2010 issue of Pittsburgh Magazine.
Categories: Arts & Entertainment, From the Magazine