Everything That's Wrong With the Penguins in Two Videos

How a change in the Penguins' defensive strategy has played right into Boston's hands. 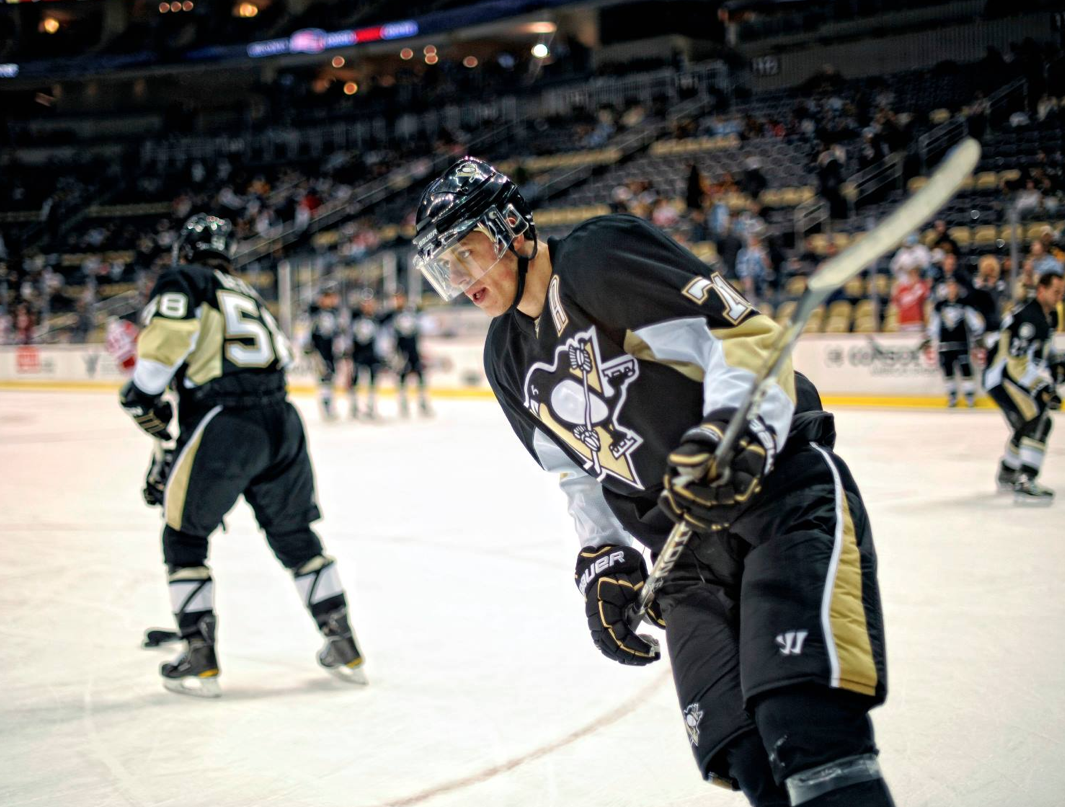 Before we get into deeper analysis, let’s just get this out of the way: If Jarome Iginla continues to play out of position on the left wing for the remainder of this series, you might as well stop consuming all information related to the Pittsburgh Penguins and instead spend the next week improving yourself as a human being. There's no sense in wasting hours ranting cravenly at the television, when the rest of this series will be nothing more than a formality.

Iginla looks so completely out of sorts on the left wing that he cannot seem to receive a simple breakout pass without turning his entire body around to adjust. This happens six or seven times per game and often results in a turnover. It seems like something that shouldn’t be a big deal, but when you have played your entire 15-year career on the right side, this is certainly what one might call a BFD.

If you’re still skeptical, try using your computer mouse with your opposite hand for an entire day. Dan Bylsma’s decision to stick with Iginla on Evgeni Malkin’s left wing is akin to someone deciding to switch-hit with their mouse during the biggest PowerPoint presentation of their life.

On paper, the pairing of Malkin and Iginla was supposed to make life very difficult for the opposition because putting their top checking line against the Crosby-Dupuis-Kunitz unit would give the Malkin-Iginla-Neal line the space they need to wreak havoc. Unfortunately, Iginla is so uncomfortable playing on the left that his line has rarely established any sustained pressure in Boston territory.

The Penguins have committed 20 turnovers to the Bruins' three — and many of those have been unforced errors by the Malkin-Iginla-Neal line. The Bruins aren’t even focused on physicality as many expected (the Penguins are out-hitting the Bruins 71 to 38). All Boston is doing is jamming a lot of bodies in the neutral zone and waiting for the calamity to begin. It’s New Jersey Devilish. It’s boring. But it’s been incredibly effective against the impatient, frustrated Penguins.

A very ho-hum series with the Ottawa Senators covered up a lot of the structural deficiencies that are currently undermining the Penguins against a much more disciplined Bruins team. While it seems that the Iginla-Malkin Experiment may finally come to an end tonight, that tactical blunder is a big reason why the Penguins find themselves in a 0-2 series hole.

As the Trib's Rob Rossi suggested today, perhaps Iginla would be a better fit on a line with Jussi Jokinen and Brenden Morrow. Iginla and Jokinen showed solid chemistry with one another during Crosby’s absence at the end of the regular season (watch this beauty for an example). This would also give Beau Bennett the opportunity to play with Malkin and Neal on the second unit. That’s an opportunity Bennett earned with his smart playing during limited chances this season. Often, the rookie was the smartest player on the ice for the Penguins. He’s an underrated forechecker and an unusually calming presence. He might be just what Malkin needs to get going. It will take some courage for Bylsma to make such a move, but isn’t that supposed to be his strength as a coach?

Now, let’s go to the telestrator to show what’s really wrong with this team.

The Bruins have outscored the Penguins 9-1 over the first two games of this series. How is that possible? Isn’t this the same Boston team that was 20 minutes away from getting knocked out of the playoffs by Toronto? You can save yourself hours of analysis by looking at these two goals, which are perfect metaphors for the Penguins’ mental breakdowns and overall lackadaisical play in the defensive zone.

Game 1: Hold On to Your Feelings

First up, we’ve got the first goal of the entire series, which really set the general tone of ineptitude and lack of focus that we’d so thoroughly enjoy for the next 112 minutes of hockey.

Some background: After the trade deadline, the Penguins changed their defensive strategy to better suit their personnel. Before, they employed a fairly aggressive, man-to-man defensive philosophy. Basically, the Penguin closest to the opposing puck carrier would go after him hard as soon as he crossed the blue line. With the acquisition of Douglas Murray and the more prominent role of 35-year-old Mark Eaton, the Penguins tweaked their system to let their defensemen back off and patrol the front of the net, leaving it to a forward to apply pressure on the puck carrier. This is a very simplified explanation, but essentially the idea is to create a buffer and push the opponent to the fringes for poor-angle shots instead of having Murray, Eaton, Matt Niskanen or *gulp* Deryk Engelland in one-on-one situations at the blue line, with nothing but open ice behind them.

And, actually, this worked really well at first. Then savvy teams started to figure out ways to exploit it. The New York Islanders used the extra space to throw everything at the net, driving Marc-Andre Fleury into a state of mania. The Bruins have instead slowed the play down and used a lot of criss-crossing movement and passing with one mission in mind: to confuse the Penguins about their defensive coverages.

Let’s watch it all fall apart.

What on earth happened on that play?

1. Forget the scapegoats
The first thing you will notice is Paul Martin in the fetal position near the crease when the shot comes in from the high slot. He is, indeed, very far back on his heels. Martin took a lot of blame for this goal, and in general, the Penguins’ defensemen have taken a lot of blame this season. But Martin's awkward shot-block attempt is simply a reaction to a colossal goof by his forwards. (Note: Several people on Twitter mentioned that Martin was actually tripped up by a Bruin on the play. That, too.) 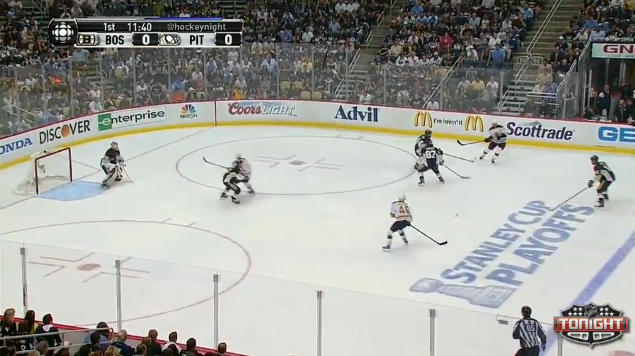 2. Crosby blows an assignment
Ultimately, this all unfolds because of a blown coverage by the best hockey player in the world. Crosby isn’t sure which man to take as the Bruins cross the blueline, and he makes a very bad decision. The whole philosophy of the Penguins’ new defensive strategy is to take away the middle of the ice and force low-percentage shots. Instead, Crosby leaves the center of the ice open to help Brooks Orpik. But Orpik doesn’t need help. His man is not in a threatening position. 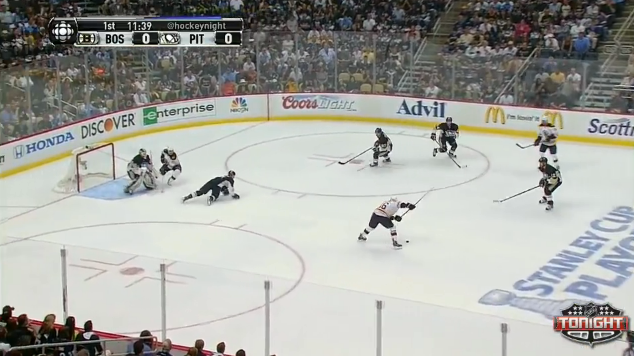 3. Parting seas
As the Boston puck carrier draws Penguins to him like a magnet, look at the open ice when he makes his pass. We are seeing a lot of this in the Boston series. Three Penguins surrounding one Bruin who isn’t even in a dangerous area, leaving acres of open ice on the “weak side” (the side of the ice opposite from the puck carrier). The Bruins are simply waiting patiently and criss-crossing on one side of the ice until the seas part on the weak side. If you want to see another example of this nonsense, watch this. 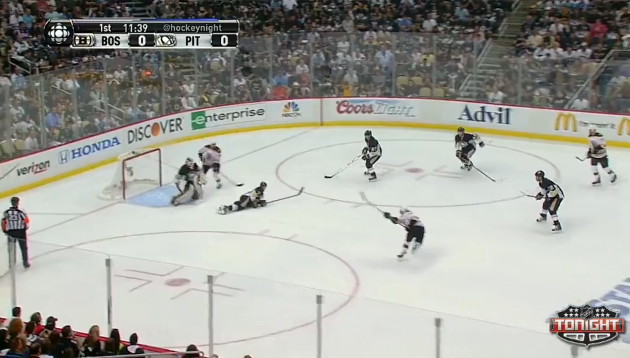 4. Gliding wingers
Check out Iginla coming in to the frame late. No, this collapse wasn’t necessarily on him, but there is way too much of this going on in the playoffs for the Penguins. The wingers don’t even seem to be engaged in the play on most goals. They’re simply gliding around watching near the blue line and reacting to the play.

Game 2: There Will Be Crud

Next up we’ve got this dumbfounding meltdown from Game 2, when the Bruins were already up 4-1. While the game may have already been out of hand, there is no excuse for what happens here.

And now for a very painful breakdown. 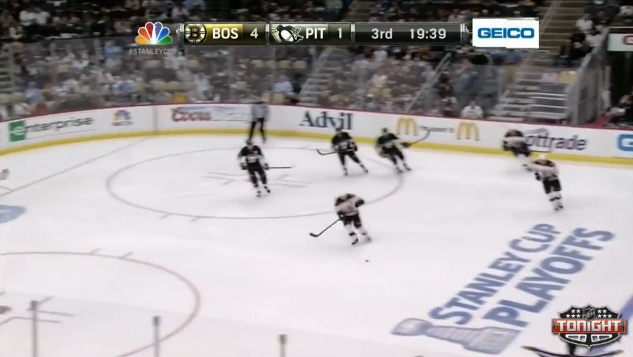 1. Odd positioning
After the faceoff loss, who are the three Penguins defending here — the cotton candy man in the stands? Why is Malkin closer to the net than the two defensemen? Why am I here? What is the point of life? 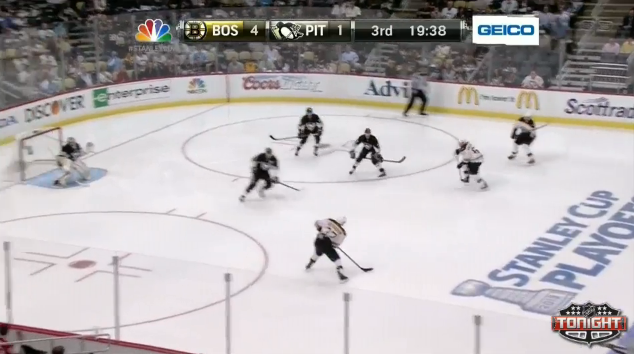 2. Just play hockey
The setup here is extra telling because it’s literally three guys lined up directly against three guys. If you were, say, playing pond hockey, or playing in the Penguins’ old defensive system, everyone would just take the man in front of him and try to make his life miserable. If you simply do that, this goal never happens. Instead, the Penguins are playing inside their own heads, and that makes them a half-stride behind the action. 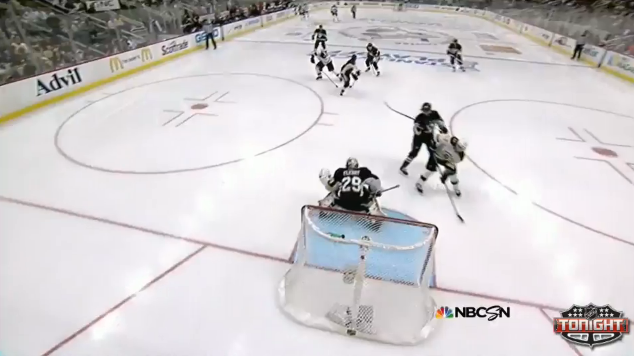 3. It's really a 3-on-5
Man alive! Look at the top of that screen. Four black shirts, one white shirt. The Boston Bruins defensemen take this opportunity to make a line change. They are not even on the ice when the play starts to break down. Yet the Penguins wingers are just standing listlessly at the blueline. Perhaps they’re in their correct “zone” in the confines of the system, but I see two guys just kind of standing around. 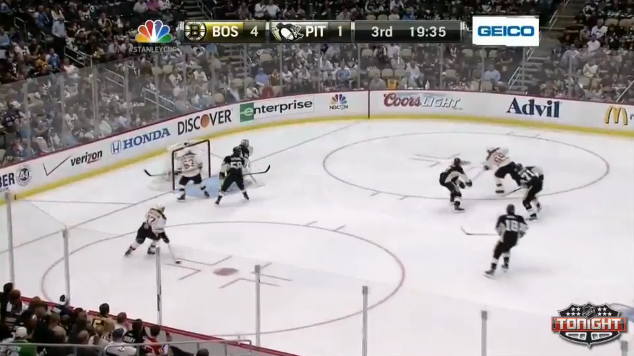 4. Lackadaisical wingers
Malkin gets a lot of blame for defensive-zone brainfarts, but what he does here isn’t that bad. He tries to take away the middle of the ice. Paul Martin is playing on the backfoot. His half-second of hesitation gives Jaromir Jagr space to operate. Malkin goes over to double-team Jagr, leaving tons of open space on the left side. James Neal should see this unfolding and bust his ass to go cover Patrice Bergeron, who is just standing there all alone. 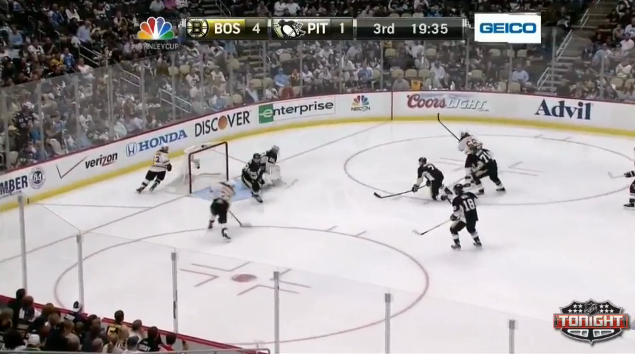 5. "Zone" coverage
Instead, Neal is covering an invisible defenseman. He’s in the correct metaphysical “zone” for the Penguins’ system but he’s not playing hockey. Or playoff hockey. Sometimes, you need to forget the whiteboard for a second and just take away open space. When your opponent gets that wide open for a tap-in when his defensemen are in the midst of a line change and one of his forwards is behind the net, there’s some real numbnuttery going on in your ranks.

Many critics are sweating Letang — a Norris Trophy candidate — for suddenly playing like he just got My First Hockey Stick, but there are four other players to blame for that breakdown.

If the Penguins go out and just play hockey in Game 3, they might win. The vaunted "system" either needs to be tweaked, or trashed, because what’s working theoretically on a whiteboard is no longer working inside these players’ heads.

If the Penguins go down in flames with this elite group of forwards, don’t blame the defense. Don’t blame Marc-Andre Fleury or Tomas Vokoun. Don’t blame Ray Shero’s deadline alchemy. The only thing on the 2013 Penguins' tombstone will be “indecisiveness.”