PittGirl calls on a Cambridge professor to help explain our quirky dialect. 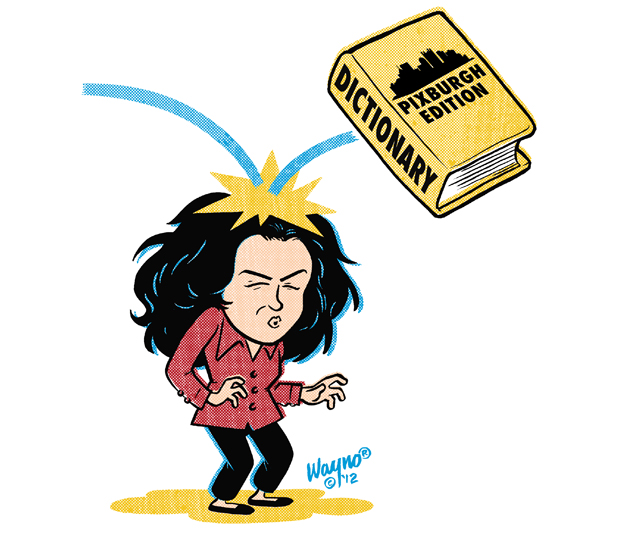 It was during my annual Thanksgiving baking frenzy that the correct pronunciation of pecan suddenly became important to me. Did I make PEE-can fudge, PEE-cahn fudge or peh-CAHN fudge? Confused, I did what any person does when they don’t know the answer to a puzzle: I asked my Twitter followers. Huge mistake.

“I can tell you with 100% certainty that the correct pronunciation is PEE-can.”

There wasn’t a clear-cut answer. In fact, some people even told me that the actual nut is called a “peh-CAHN,” but after you bake it in a pie, it mysteriously transforms into a “PEE-can.” Those people were unfollowed. I can’t tolerate that kind of ridiculousness in my life.

This is where linguistics professor Bert Vaux of the University of Cambridge, United Kingdom comes in. While teaching at Harvard, Dr. Vaux, whose parents were from Pittsburgh, surveyed more than 10,000 people all over the country to get an understanding of regional dialects.
He sent me the data. From there, I took to Excel to pull out the responses from the greater Pittsburgh region. And from there, I really wished I had paid more attention in Excel class. If I knew how to use a pivot table, it would have saved me the pencil, paper and abacus route I took to extract this information … for you. You’re welcome.

(Keep in mind that numbers don’t always add up to 100 percent because of various “other” answers.)

Pecan: Thirty-eight percent of Pittsburghers pronounce it pee-CAHN, while 19 percent say PEE-cahn. Another 16 percent say pick-AHN and 12 percent PEE-can. Then there are the rascally 9 percent who say the ridiculous “pick-ann.” If they were on Twitter, I’d unfollow them.

Coupon: Fifty-seven percent of us say “coop-on,” and 42 percent of us use “cyoo-pons.” Contrast that with the whole country, where the clear winner is “coopon” (67 percent). Then there were eight ’Burghers (1 percent) who indicated they have “another” way of saying it. I’m guessing “discounted goods vouchers.” UNFOLLOW.

Crayon: Most Pittsburghers favor the “cray-awn” pronunciation (56 percent), followed by “cray-ahn” (32 percent), which is actually how the majority of U.S. citizens say it (49 percent). I am one of the 10 percent of ’Burghers who was raised using “crans” because that’s how Mister Rogers said it!

Crick/Creek: Only 4 percent of Americans say “crick”—but 27 percent of Pittsburghers do, while another 12 percent of us use “crick” and “creek” interchangeably.

Spigot/Spicket: Only 6 percent of Americans say “spicket,” but in Pittsburgh, 26 percent of us do. Interestingly, 33 percent of those who say “spicket,” still spell it “spigot.” Makes total sense—like baking a peh-CAHN pie and watching the heat of your oven magically turn it into a PEE-can pie.

Sub vs. Hoagie: The U.S. heavily favors calling long sandwiches “subs” (77 percent). Here in the ’Burgh, though, we eat “hoagies” (44 percent), while only 7 percent of America refers to them as such.

You/You all/ Yinz: Surprisingly, a majority of the country and Pittsburgh refers to a group of people as “you guys,” followed closely by “you.” Here in Pittsburgh, only 13 percent of ’Burghers regularly say “yinz.” Nationally, however, almost every single person who selected “yinz” lives in the Pittsburgh region. Except one guy in Texas, who I bet has a killer Steelers mancave.

Soda/Pop: While the majority of the country (53 percent) says “soda,” Pittsburghers like to drink “pop” (62 percent).

Rubbernecking: When asked what the traffic jam caused by drivers slowing down to look at a diversion is called, Pittsburgh (60 percent) was right with the rest of America (61 percent) in saying “rubbernecking” is the activity—but we have no word for the resulting jam. Quite interesting are the terms other Americans use to describe this phenomenon: gapers’ block, gapers’ delay, curiosity delay, gawk block. We need to adopt one of those so I can hear a traffic reporter say, “An accident on the inbound Parkway East is causing a lengthy curiosity delay on the outbound side.”

We’re more likely to say “lightning bug” (58 percent) instead of “firefly.” Only 14 percent of ’Burghers are using “buggies” because we’re too busy pushing around our “shopping carts” (69 percent). Finally, a whopping 77 percent of ’Burghers have no term for when rain falls while the sun is shining. The rest of America uses terms like: The wolf is giving birth. The devil is beating his wife. Monkey’s wedding. Pineapple rain. Liquid sun.

Let’s try one out: “The wolf is giving birth over the Parkway East, where a truck spilled a load of hoagies, causing one heckuva gawk block as rubberneckers slow down to …”

I think we have a winner. Don’t let me hear you calling it something silly like pineapple rain. Or I’ll unfollow you.

This article appears in the March 2012 issue of Pittsburgh Magazine.
Categories: From the Magazine, Hot Reads, PittGirl