Some of the best oysters available in Pittsburgh can be yours for a steal at the new East Liberty spot. 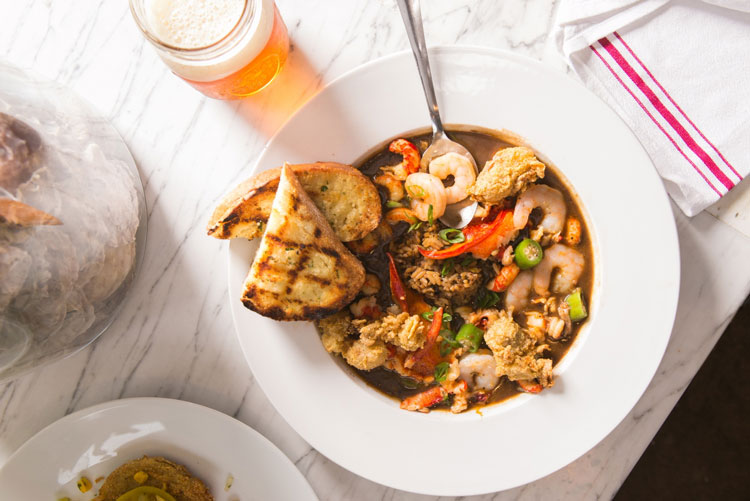 Among the many marks of East Liberty’s continued ascendance, there’s one that stands out to me at the moment: via Muddy Waters Oyster Bar, East Liberty now has an Oyster Happy Hour.

Honestly, this is one of those occasions on which I’m not sure I need to write anything else. That first sentence should pretty much sell it.

This is not the first such after-work offer in town; Eleven has had a popular oyster special as part of its happy hour menu for years. And look: I’m not even a huge oyster guy. I appreciate oysters, but they are by no means my go-to. But at Muddy Waters, they have very, very good oysters. My colleague Hal B. Klein encouraged me to opt for an offering from the west coast, since there are still very few oysters with Pacific roots available in Pittsburgh. The half-dozen salty, remarkably fresh Gigamoto oysters that appeared in front of me a few minutes later were like none I’d ever tried, rivaling those I’ve had even in coastal cities.

Let me restate the original premise, though: Oyster Happy Hour. The somewhat overplayed concept of a post-work period of bar deals is more or less a march of obligation in most places; some drinks are a little cheaper, some domestic drafts are probably $2, a bunch of apps (which were priced too highly to begin with) are reduced to half-price.

Muddy Waters’ Oyster Happy Hour is not that, simply by fact of the offer. East-coast oysters are offered by the dozen or half-dozen for a dollar each. West-coast oysters, $2 each. These are something close to a delicacy, and a rare treat in Pittsburgh — and there are two hours (4:30-6:30) every weekday during which you can get ’em for half-price.

Other deals available during my visit included a shot-and-a-beer combo for $8 — except that the shot in question was a healthy pour of breathtakingly good bourbon. Bottles from their “bubbles” menu, encompassing everything from a $28 bottle of Prosecco to a $200 bottle of Brut, were $10 off as well.

Another word on alcohol — few bars around here do as well as Muddy Waters across the spectrum, with thoughtful wine, beer and cocktail lists. The craft-beer selection is varied both stylistically and geographically, the wine options should please every palate and the cocktails — tending towards classic southern creations, to better pair with Muddy Waters’ Creole-laced menu — are tempting enough to inspire repeat visits on their merits alone.

And the truly remarkable thing about Oyster Happy Hour is that, on the right night, you can still get in with room to breathe. On my visit, I was able to walk right up to a seat at the bar, and I wouldn’t have needed to wait had I requested a table. I’m betting, however, that word will soon spread (especially in such a buzzing neighborhood) and the after-work hours at Muddy Waters will be consistently packed sooner rather than later. So go now, while you can still have a quiet conversation with the staff about oyster and cocktail preference (another pleasure at Muddy Waters).

Seriously, though — a half-dozen oysters from British Columbia for $12. It sells itself.

This article appears in the February 2016 issue of After Dark.
Categories: After Dark