Help the hungry at the Empty Bowls Dinner this month. Not only will you enjoy tasty soup selections, but you’ll also take home your bowl as a souvenir and symbol of those who go hungry in our region every day.

As the nation’s recession treks on, so does hunger, and this part of the country is no exception. Hunger transcends all geographic areas in southwestern Pennsylvania, even despite social or economic levels, according to The Greater Pittsburgh Community Food Bank (GPCFB). A southwestern Pennsylvania hunger report from the GPCFB shows that one in seven children within the Pittsburgh region does not get enough to eat.

One way to help the hungry is to eat soup on Sun., March 7, at the 15th annual Empty Bowls Dinner, hosted by the GPCFB and Just Harvest: a Center for Action Against Hunger. Not only can you enjoy tasty soup selections, but you’ll also take home your bowl—a souvenir and lasting symbol of the hunger that many people in the Pittsburgh region experience every day.

“The idea of the empty bowls really touched people in a deep way,” says Ken Regal, co-director of Just Harvest. “It provides ways for everyone in the community to contribute. Whether it’s a restaurant donating soup or a school donating bowls, these donations are unlike a donor who writes a check. Rather, these are really donations of love.”

Here’s how the event works: First, many different groups, from professional pottery studios to elementary schools in Allegheny County, create bowls for soup. Local art classes that participate each year include those from Carlow University, Pittsburgh Center for Arts, Union Project and Manchester Craftsmen’s Guild.

To fill these bowls, restaurants and caterers donate several hundred gallons of soup, which is served with bread. Some participants each year include big Burrito, China Palace, Eat‘n Park and Smallman Street Deli. Although selections change throughout the evening, with four or five different soups going at one time—and yes, one is always chicken noodle, a kids’ favorite—options include Thai peanut, vegetable chili, beef barley, cream of mushroom and seafood bisque.

“The idea of the empty bowls really touched people in a deep way. … Whether it’s a restaurant donating soup or a school donating bowls, these donations are unlike a donator who writes a check; rather, these are, really, donations of love.”
—Ken Regal, co-director, Just Harvest

This meager meal of soup and bread helps to remind people of the event’s main focus: That while one person’s bowl may be full, another’s may be empty. Hungry guests waiting in line begin to think about the reason they are there, according to Iris Valanti, communications director of the GPCFB.

“When you get to Empty Bowls and it’s crowded, around four or five in the afternoon, you start to get a line that’s long, and people start grumbling that they are with their bowl in line,” Valanti says. “And then they go, ‘Oh, right. That’s the idea. It’s the soup line, remember?’”

In its history, the Empty Bowls Dinner has served some 13,000 bowls and 3,000 gallons of soup and has raised more than $350,000 for the GPCFB, a non-profit that collects and distributes food throughout 11 counties in southwestern Pennsylvania, and Just Harvest, a non-profit that advocates against hunger and poverty. 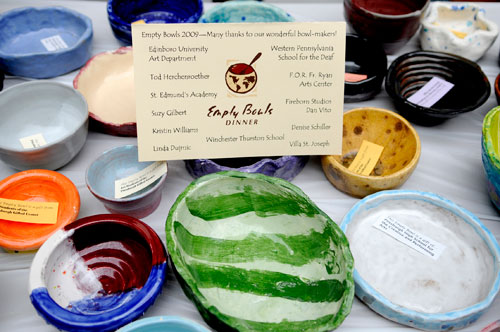 “Obviously the recession has hit here, and unemployment is a big factor. This time of the year, we are certainly very busy,” Valanti says. “There are a lot of families barely making it, and when one big expense comes along—a heat bill, an injury, a medical problem—that’s going to throw the whole family budget into disarray and that would send them finding themselves needing some assistance.”

The number of people in need now is unprecedented in the history of the food bank and so is the amount of food the food bank is moving—the Food Bank is adding 1 million pounds per year onto its original expectation. In 2010, the bank expects to move 22.5 million pounds of  food. While demand rises, the national trend indicates that the amount of donated food is down, so food banks are forced to make ends meet.

“There’s not a lot of free donated food around, which means we purchase more,” Valanti says. “Events like Empty Bowls make it possible to raise more money, which is what we need to raise so we can purchase it.”

2009’s event was a record-setter in terms of donated soup and bowls. With approximately 400 gallons of soup and 1,300 bowls, the event showed a major increase from the year before. 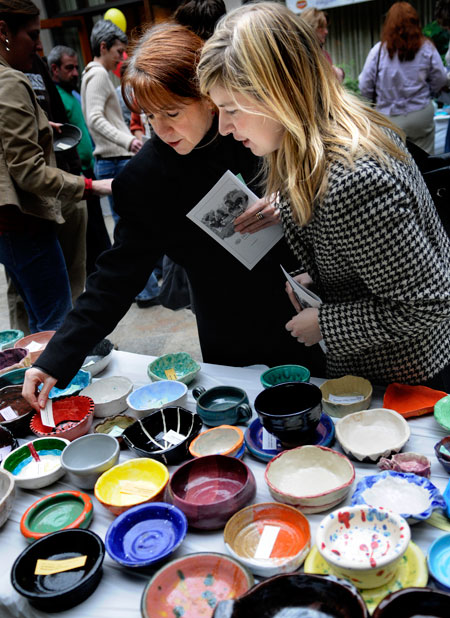 “It’s a lot of fun, and the bowls are beautiful. People really like it,” says Valanti. This year, the food bank expects the dinner to be just as successful, if not more. One reason for the past success? “It’s family-friendly,” says Valanti.

Fun for the whole family includes a silent auction with bowls donated by professional potters, face painting, balloon art and a strolling magician and musician.

Not to mention the event’s celebrity involvement: The Celebrity Bowls Auction will include autographed bowls from Jerome Bettis, the Pittsburgh Penguins and cast members from Saturday Night Live. Celebrity soup servers include local athletes, news anchors, news writers and politicians. Although all of this year’s celebrity guests have not been confirmed, one who will be attending can be spotted in a bright yellow apron: WQED’s and Pittsburgh Magazine’s Rick Sebak.

This article appears in the March 2010 issue of Pittsburgh Magazine.
Categories: Arts & Entertainment, Things To Do