Embrace the Bizarre with Everything is Terrible

The found-footage archeologists come to Pittsburgh with an uncanny, hypnotic new show. 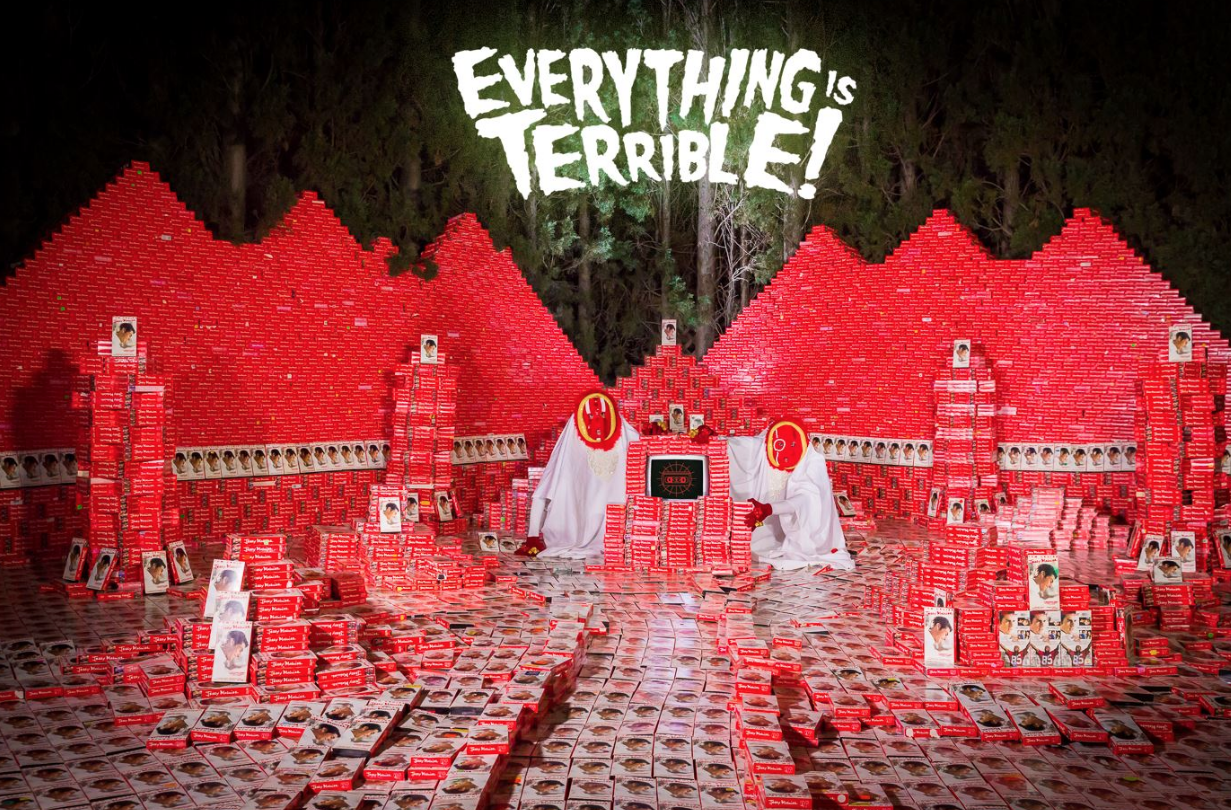 Stroll the aisles of any thrift store — we’re in Pittsburgh, we certainly have enough of them — and you will inevitably find a shelf of unwanted VHS tapes. You’ll find blockbusters among them, to be sure; the major hits of the ’90s churned out hard plastic copies in staggering numbers, so there are enough copies of “Jurassic Park” and “Goldeneye” to fill a skyscraper. (Or a pyramid, but we’ll get back to that later.)

But you’ll also see a lot of bizarre flotsam among those discarded cassettes. Bargain-basement horror flicks. Unwatchable children’s programming. Self-help manifestos. Outright propaganda. They were made, they barely sold and now they clog the shelves of our Goodwill locations.

You’ve probably thought to yourself, “I bet there’s a lot of hilarious stuff on those tapes.” But who sits down and looks for it?

Everything is Terrible specializes in discovering and resurrecting forgotten bits of video ephemera, uploading individual bits of absurdity to their YouTube page and combining assorted clips into frenetic compilations of outdated madness.

This Wednesday, they’ll bring their most ambitious creation, “The Great Satan,” to the Carnegie Stage, as presented by the Friends of the Hollywood Theater.

“We pulled from 2,000 VHS tapes — kids sing-alongs to Z-grade movies and everything in between,” says Dimitri “Ghoul School” Simakis, co-founder of Everything is Terrible. “We pull it all together, pull our favorite moments out of it and we say, ‘Okay, what is the story here?’”

That’s right — “The Great Satan” has something like a plot. Focusing on the pearl-clutching fears of rampant Satanism that inexplicably swept America in the 1980s, the feature-length film (sort of) recounts the story of Lucifer’s fall, his attempts to corrupt the people of America and his final, apocalyptic battle.

Watching it is bizarre, unsettling, hypnotic and hilarious. I particularly enjoyed the decapitation montage. (And felt considerable shame when a clip would be drawn from something I actually watched willfully, like “Death Bed: The Bed That Eats” or Summerslam ’91.)

“We don’t like saying so-bad-it’s-good — because if it’s bad, why do you want to watch it?” Simakis stresses that the merits of individual clips, which range from a split-second to about a minute in length, are varied. “There’s a lot of stuff that’s really beautiful in these shot-on-video horror movies,” he says. “And then there are things that are just so over-the-top ridiculous … that you can’t help but put it in there.”

The show is much more than the screening. Presented in a touring, road-show format, “The Great Satan” is designed to be an experience as over-the-top and ridiculous as those encountered in those forgotten videotapes.

“There’s gonna be battles between good and evil,” Simakis says. “There’s everything from seven-foot goats to evangelical preachers; there’s a character we call New Testa-Man that reminds us all of He-Man … Satan himself appears.”

The Everything is Terrible crew will also be soliciting a very specific type of donation, in pursuit of their grand plan: A gigantic desert pyramid comprised entirely of “Jerry Maguire” VHS tapes.

You can take a moment to digest that sentence.

The long-term ambition is to secure every surviving copy of the Tom Cruise romcom (which, inevitably, pops up in “The Great Satan” once or twice) and use them to construct a dadaistic monument somewhere in the American southwest. “We love roadside attractions and things that shouldn’t exist,” Simakis says. “We want it to last forever.”

They have amassed more than 17,000 tapes thus far; anyone attending tomorrow night’s show is encouraged to bring any copies they can find.

Why “Jerry Maguire,” though?

“There was no other movie. It was always Jerry Maguire. Every thrift store, every video store going out of business, every garage sale all had one movie in common.”