Whether you merely enjoy the occasional bump in the night or are a year-round horror hound, these local outings should be on your annual list. 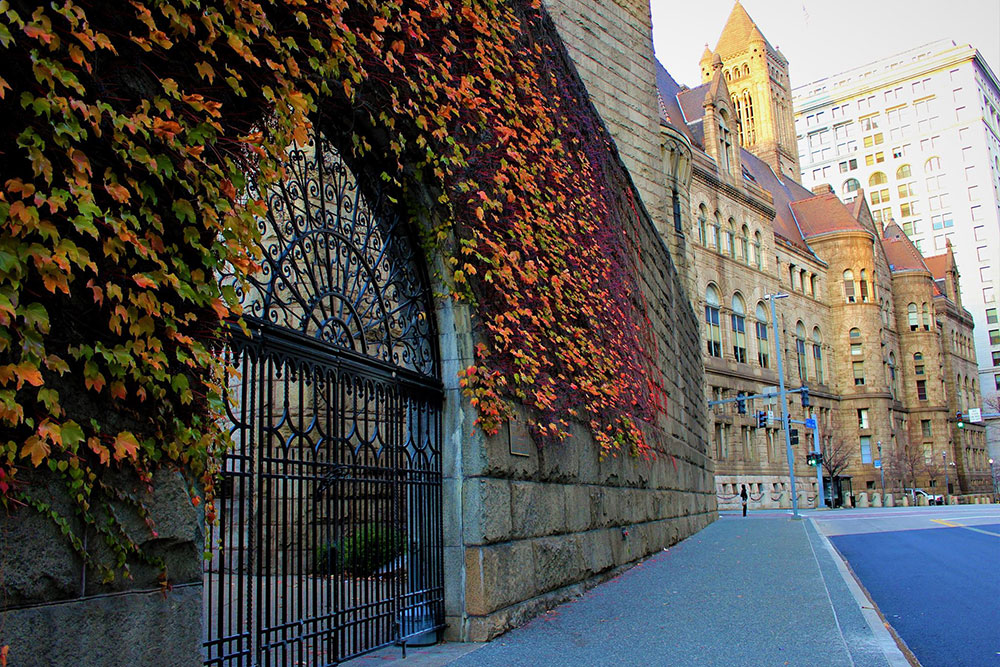 If you want a history lesson along with your frights, a ghost tour with Haunted Pittsburgh is a can’t-miss activity. Starting at 7 p.m. on most Friday and Saturday nights, Haunted Pittsburgh guides customers on a bone-chilling walk around Downtown. The outdoor tour begins at the City-County Building and includes stops at the former Allegheny County Jail and the site of the city’s longtime morgue. Throughout the walk, guides tell the Steel City’s greatest ghost stories, all of which have been heavily researched by the Haunted Pittsburgh team. Stories mostly stem from archival sources — ghost sightings were reported as news in 19th-century newspapers — and tied to the broader history of the city, from the attempted assassination of Henry Clay Frick to a possible appearance of Jack the Ripper in Pittsburgh. —SL 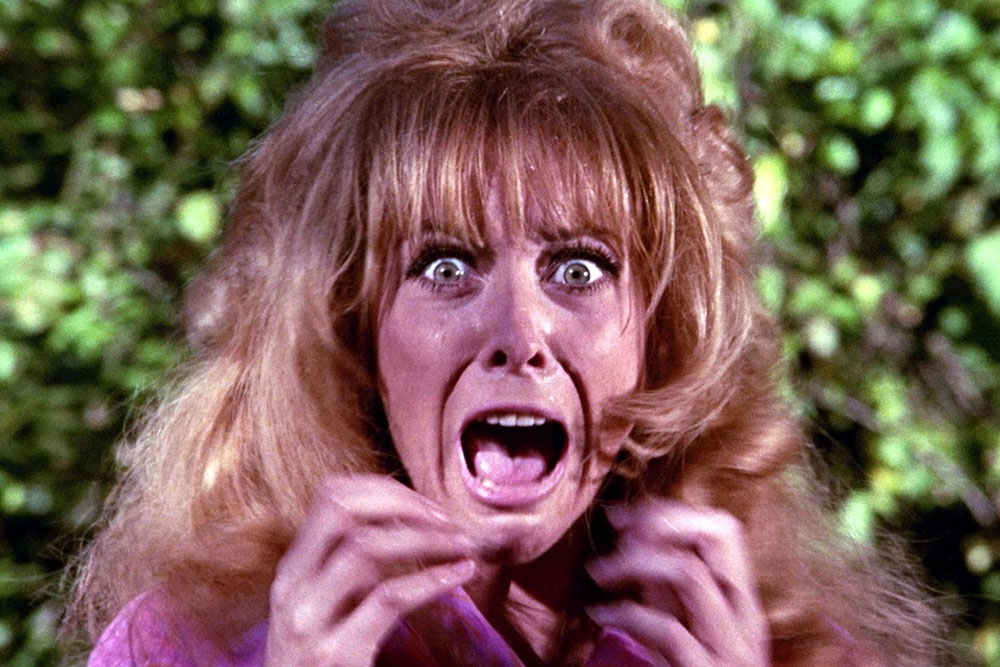 Part film festival, part horror convention and part gathering of like-minded fright fans, the twice-annual Drive-In Super Monster-Rama event offers an octet of big-screen chills under the stars at Riverside Drive-In in North Vandergrift. Each spring, the “April Ghouls” edition spotlights cult classics from the 1980s; in September, the focus turns to more retro choices, such as technicolor terrors from England’s Hammer Studios or favorites from the 1970s Italian scare masters. Four films per night kick off at dusk and stretch nearly through to dawn; diehards can opt to camp out between nights, with breakfast available at the snack bar. —SC 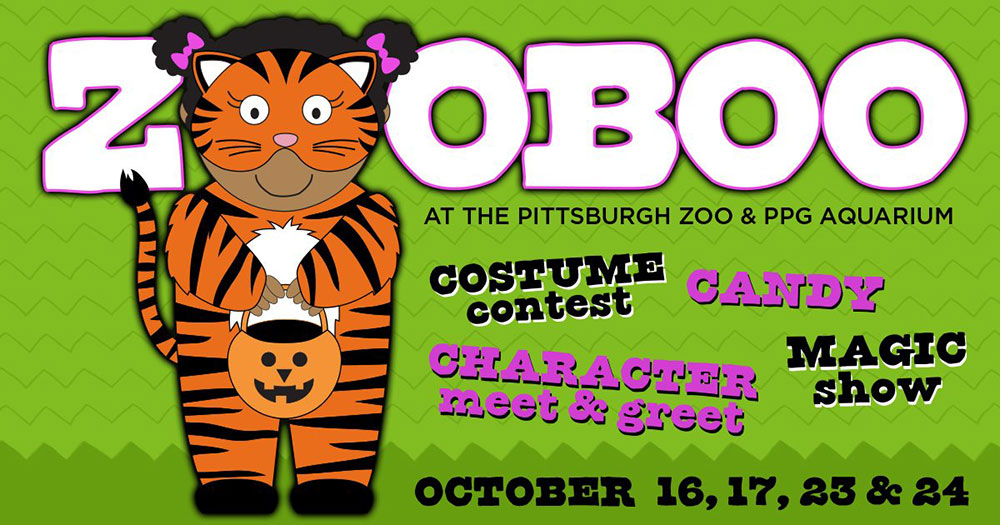 For children looking for a healthy dose of Halloween fun (without any nightmare-fueling scares), there are plenty of regional options. The Pittsburgh Zoo holds its annual “ZooBoo” event during two weekends in October — this year, on the 16th-17th and 23rd-24th. This family-oriented Halloween celebration, which is included with the price of zoo admission, will feature trick-or-treating across the zoo, themed crafts and games, a costume parade, magicians and a kid-friendly haunted house. Meanwhile, Idlewild Park in Ligonier will host its annual “HALLOWBOO!” celebration, featuring trick-or-treating in the Storybook Forest, two walkthrough mazes and much more. In 2021, the family-friendly events will take place on weekends from Sept. 25 through Halloween. The Children’s Museum of Pittsburgh’s “Boo For You Too” event offers programming tailored to children with sensory needs. This day of Halloween fun will include themed crafts, face-painting, concerts, and even a silent disco — a dance party where the participants listen to shared music through headphones. This year’s event is set for Oct. 29. —SL 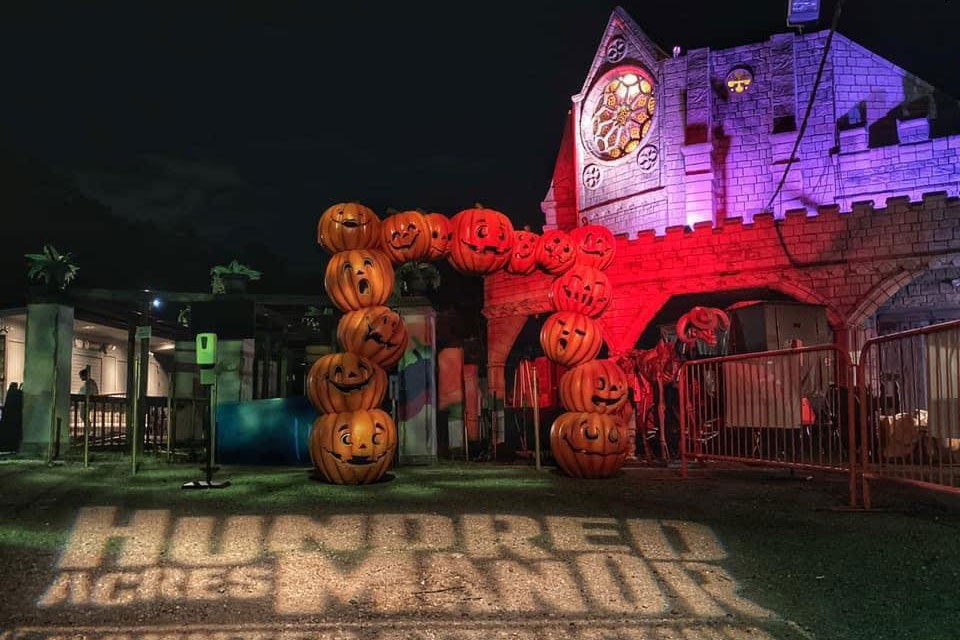 With an expansive multi-theme haunted house, a dark maze infested with clowns, a twisted Bourbon Street party and a beer lounge for pre- or post-fright refreshment, local favorite Hundred Acres Manor is ready to bring the scares every Halloween season. As the largest haunted attraction in the region, Hundred Acres Manor stretches across more than a mile of land in the South Hills. Among the highlights this season is a new attraction called “Folklore,” a journey through the forests of the Appalachians featuring frightening encounters with massive yetis. The establishment’s “crowd favorite” ultraviolet-light-soaked voodoo attraction will also return this year, in addition to a 20,000-square-foot maze. Children and families will also be invited during three exclusive days to attend the haunted house in the daytime with the lights on, with blood and gore replaced with actors in fun costumes. Hundred Acres Manor operates as a nonprofit, with its revenue supporting families in need in the Pittsburgh community. —SL 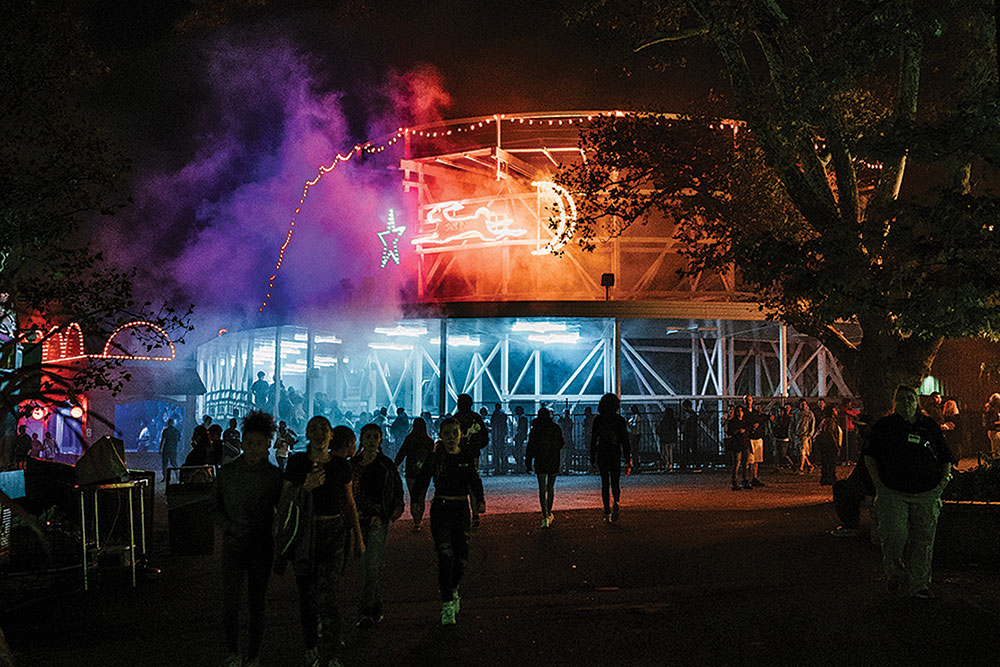 The spooky amusement park is a trope for a reason: Take away the sunshine and send the calliope into a minor key, and you can easily cast a creepy pallor over the midway. Kennywood has known that for decades, hosting Phantom Fright Nights in the park each October; rides and games mingle with haunted attractions built into some of the park’s iconic landmarks. This year, the event has been branded Phantom Fall Fest, and it’s an all-day affair. While the sun is up, a family-friendly fall festival (with a few minor walk-through haunts) will offer families a chance to make some late-season Kennywood memories. After the sun sets, things get scary, with five haunted attractions, four scare zones, seasonal beer and desserts and more. This year’s events will take place every Friday, Saturday and Sunday in October (though Fridays will include the evening portion of the event only).  —SC 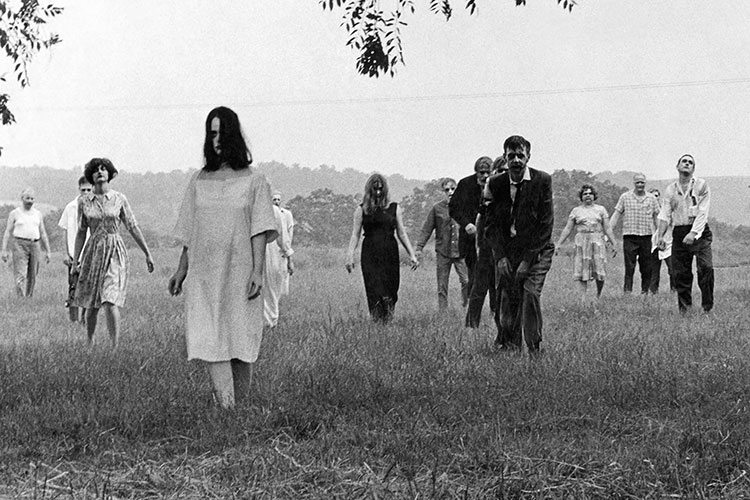 Those in search of undead origins should head to Monroeville Mall — where George A. Romero’s classic “Dawn of the Dead” was filmed — to visit the Living Dead Museum, a lively exhibit that traces the history of the films that made Pittsburgh the “zombie capital of the world.” While the museum is always worth a visit, it becomes a hub for horror aficionados during the annual Living Dead Weekend, usually held in July. Cast members from Romero’s movies and other horror favorites pose for photos, vendors of spooky goods sell one-of-a-kind wares and panels take fans behind the scenes of favorite flicks. Another edition of Living Dead Fest, usually held in October, takes place in Evans City, near filming locations from “Night of the Living Dead.” —SC 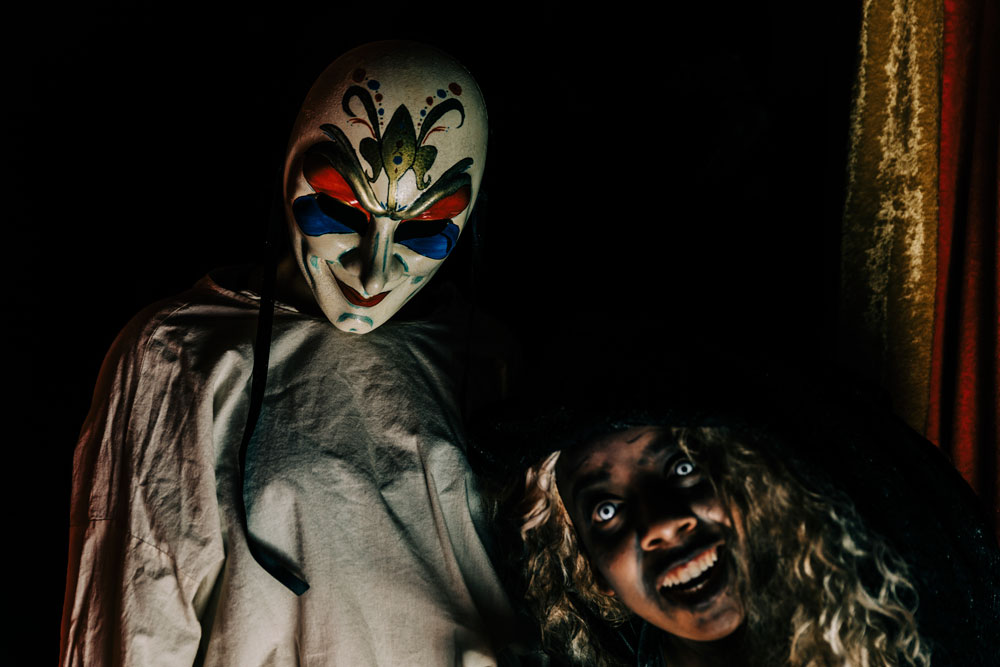 This house of horrors is not for the faint of heart. Pittsburgh’s own ScareHouse commonly appears on lists of the most terrifying haunted attractions in the country, and for good reason. In 2020, they moved into a new location in The Galleria at Pittsburgh Mills, where they then offered a limited experience adapted to COVID-19 restrictions. This fall, ScareHouse hopes to return in full force, delivering in-your-face scares on select dates from Sept. 17 to Nov. 6 (with advance purchase of tickets recommended). “20 Years of Fears” is this season’s theme — a homage to the “greatest hits” of ScareHouse’s creatures, often trying to mix moments of humor in with the frights. You’ll encounter many of their most feared and beloved characters, from their signature axe-wielding bunny to a burned-out birthday party clown named Creepo. —SL 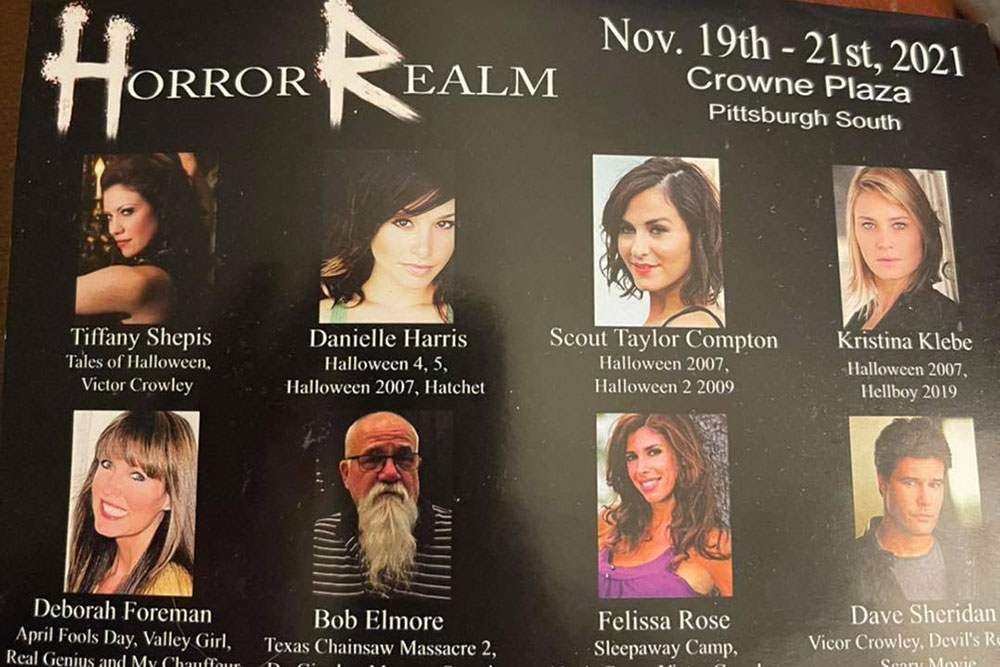 Looking to meet a favorite figure from cinematic horror? Keep an eye on the lineups for Steel City Con and Horror Realm Con, two regular conventions that often feature celebrity guests from iconic scary movies. The most recent edition of Steel City Con, held in August at the Monroeville Convention Center, featured the likes of Robert “Freddy Krueger” Englund and James Jude Courtney, the current incarnation of Michael Myers. The next Horror Realm, set for Nov. 19-21 at the ​​Crowne Plaza Suites Pittsburgh South, is scheduled to welcome iconic “Friday the 13th” villain Kane Hodder, “Sleepaway Camp” star Felissa Rose and many more. At both conventions, you’ll be able to build a collection of horror DVDs, T-shirts, figures and most every other type of merch you can name. —SC

This article appears in the Oct. 2021 issue of Pittsburgh Magazine.
Categories: Things To Do