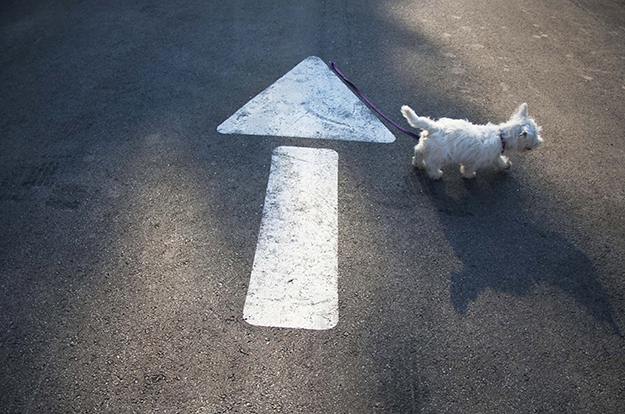 Photo courtesy of Pittsburgh Center for the Arts

You could say that Charlee Brodsky has worked with dogged determination to create a show for the Pittsburgh Center for the Arts, which named her the 2012 Artist of the Year. This special exhibit, which opens Aug. 10, features new works that (primarily) revolve around her West Highland White Terrier, Max, and her other Westie, Sam.

What you’ll be seeing at her PCA exhibit is more than cute pet pictures, though it’s “a huge departure,” Brodsky promises, from her previous local and national endeavors.

“When asked to describe what I do in few words, I reply, ‘I am a documentary/fine-art photographer, and my work is about social issues and beauty,’” says Brodsky, a photography professor at Carnegie Mellon University, as well as a presence in the local arts scene for three decades.

“Most of my work is collaborative and includes my photographs with others’ words,” she says. “I have worked with social scientists, a painter, poets and creative-nonfiction writers on subjects that range from breast cancer, to mental health, to the decline of a neighborhood steel community, to day-to-day life in Kolkata, India — just to name a few projects.”

In the past, Brodsky’s photos have appeared in books. For the PCA show, she made five books, inspired by literature and art; these will be displayed on pedestals throughout three PCA galleries. (Prints inspired by pages in the books will be hanging on the gallery walls.)

As a leitmotif (or a kind of artistic guide dog), primary character Max (and occasionally Sam) will lead us through the books. Pairing the written works with Brodsky’s images is an engaging way to forge a connection to deeper issues about our human condition, in which we bond through words. “My new work features words from Shakespeare, Dostoyevsky, Mary Shelley and John Muir, as well as quotes from Jackson Pollock, Claes Oldenburg and other visual artists,” she says.

For example, Brodsky’s book Monster is propelled by words written by Mary Shelley for Frankenstein. In that book’s afterward, Brodsky reflects: “Shelley’s book creates a fable for generations of human creatures who often need to re-examine how they tread on moral ground that continues to shift.”

And by placing a furry, four-legged creature on that shifting moral ground, Brodsky reinvigorates Shelley’s words for a new generation.

The PCA’s Artist of the Year award originated in 1949 to honor “those making significant creative contributions to Southwestern Pennsylvania and beyond.” In 2001, a complementary award, Emerging Artist of the Year, was created to recognize a local artist at an earlier milestone in his or her creative journey.

This year, the committee’s choice for Emerging Artist of the Year is Vanessa German, who, like Brodsky, also uses words in her multimedia art, which includes a style of performance she calls “spoken-word opera.”

German, originally from Los Angeles, is a sculptor, poet, actress and designer who believes in “the seamlessness of creative process and purpose.” Sources of inspiration include African and African-American folk art, African tribal power figures, ritual ceremony and “the American story.” German explores “the intersections of art, art/work(s) and community through the lens of race, class and gender.”

A series of sculptural installations, which take form through a layering of myriad everyday objects, will be the visual focal point for her PCA show. “I am creating a series of contemporary power figures inspired by my compulsion to create utilitarian works of art directed in recognition and response to everyday physical, economic, social, spiritual and political needs,” she says. “These objects and figures will be installed in make-believe environments that imagine altered histories and reconfigured realities juxtaposed against the known, the shown and the blatant.”

And there’s more: In harmony with German’s multimedia, multidimensional approach to art, she’ll bring these installations  to life via artist talks and interactive performances. Those could include poetry, comedy and storytelling.

About her PCA show, German says, “People will see my fearless — some would say foolish! — faith in the power of art.” And that faith, like Brodsky’s, has been rewarded through these two major shows honoring local artists and their work.