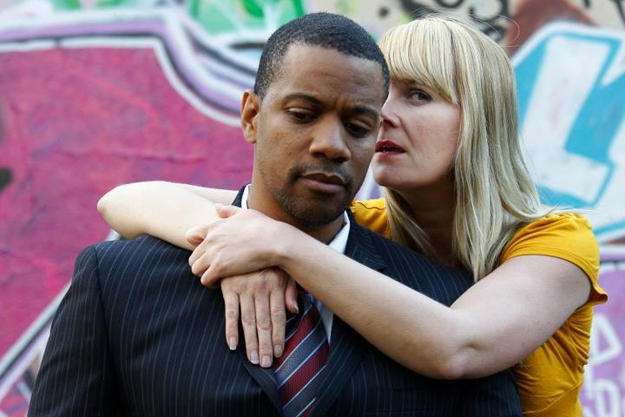 LeRoi Jones’ Dutchman — currently running at Bricolage, in collaboration with the August Wilson Center for African American Culture — is an atomic bomb of a play, to be deployed carefully. Every word in Jones’ (aka Amiri Baraka) script is full of so much weight, so much meaning and (most essentially) so much history that the very production of Dutchman is something of a statement.

Good thing it’s only an hour long; at full-length, it might break down the walls of the theater.

The show takes place on a subway car, where an overtly sexualized white woman (played razor-sharp by Bricolage’s Producing Artistic Director, Tami Dixon) approaches a sharply dressed young black man (Jonathan Berry, strong and precise.) Intellectualized, cryptic flirting gives way to bizarre racial grappling; by the time you get the inkling that something is afoot, the subway car is hurtling to its conclusion.

Let’s stop right there, for a moment: first and foremost, this Dutchman is excellent. Fully realized, tense as a wound-up guitar string and haunting in a way few plays manage to be, it lives up to the reputation Bricolage has built as of late. That is to say, like almost everything that hits this stage, it absolutely must be seen. To abuse the cliche, if you make it to one play this summer…well, see this one. Twice.

Furthermore, they’ve transformed their small Cultural District home entirely, creating a full-scale replica of a subway car inside their theater space — with familiar underground tiled walls expanding into the lobby, where visitors are encouraged to add graffiti before the show begins. The sounds of a train rumbling underneath the city, from the creaks and groans of the track to the indecipherable announcements of the conductor, echo from the moment the front doors open to the end of the show. A newsstand offers candy and soda. Even the playbill is printed to fold out in the shape of a PAT schedule.

If Bricolage’s treatment of Dutchman stopped there, with an uncannily immersive experience and a world-class pair of performances, it’d already be a remarkable show. But, perhaps unsatisfied with being simply remarkable, and perhaps knowing that the audience needs a life preserver after seeing the show, the company has decided to segue from performance into discussion, hosting a series of post-show speakers to spark a dialogue with the audience. Far from the usual post-show talkback, though, these speakers — academics, writers and experts on the tricky subject of race relations — are trying to get us to talk not about what we have seen on stage, but what we have seen outside the walls of theater.

It’s bold simply in that we’ve fallen behind in our racial dialogue. Unless a tragedy like that of Trayvon Martin occurs (and that incident was brought up multiple times in the course of the discussion I attended,) we’re reluctant to discuss race openly. We’re afraid of offending, afraid of being branded this or that, and eager to seem so post-racial that we don’t even think of race to speak of it. But, as any discussion on the topic will make clear, it is perhaps more necessary than ever that we engage in these dialogues. And after Dutchman, one cannot help but do so — so why not go with it, then?

The result of seeing this show and being challenged to this dialogue is an unforgettable night at the theater. Even moving art has a tendency to fade over years, but Bricolage is offering a rare opportunity to undergo a truly transformative experience. Just as producing Dutchman is a statement, to pass on the opportunity to experience it would be a mistake. Art that challenges is always growing harder to come by; fortunately, Pittsburgh still has places that are eager to provide it.