The constitutional law expert looks at changes to the vote — and to the conversation — in Pennsylvania and beyond. 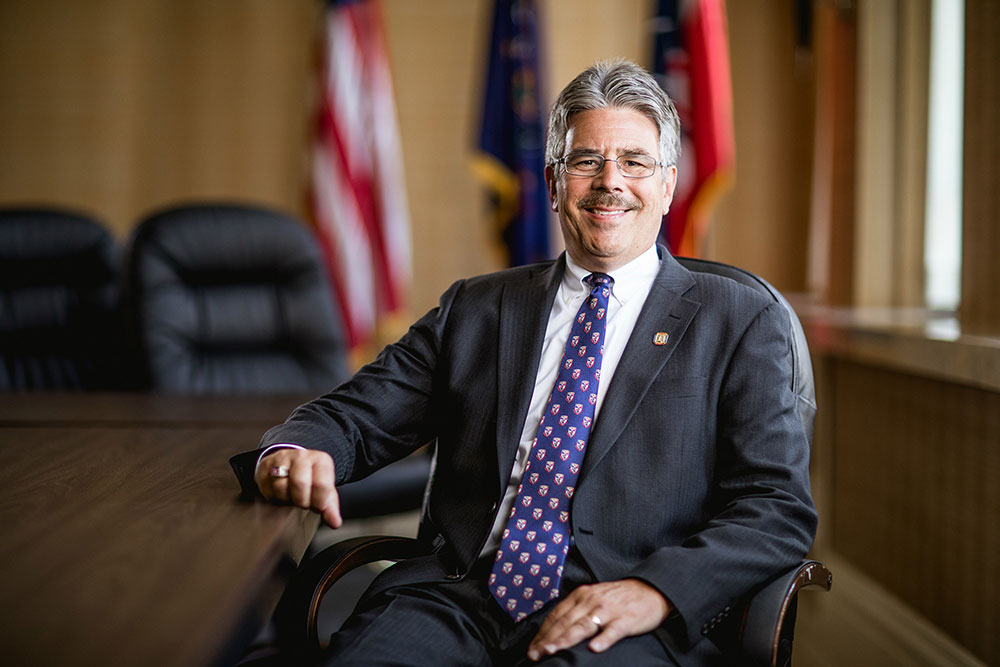 In addition to serving as the 13th president of Duquesne University, Ken Gormley is a nationally regarded expert on matters of constitutional law. His acclaimed 2010 book, “The Death of American Virtue: Clinton vs. Starr,” documented the scandal that led to President Bill Clinton’s impeachment. His most recent book is “American Presidents and the Constitution: A Living History.”

A former president of the Allegheny County Bar Association, Gormley has testified before the Senate on three occasions and appeared on national television to comment on matters relating to politics and the law. Gormley spoke to Pittsburgh Magazine about the results of the 2020 presidential election.

Demographically, what changed in Pennsylvania between 2016 and 2020? It seems that there was a pretty significant, and ultimately decisive, swing.
It’s interesting. In many ways, I see it as Pennsylvania looking like a mirror image of 2016. That’s true of some other states, as well, like Michigan and Wisconsin. There were a group of people who tried out Donald Trump in 2016, and an equal number of people flipped back to Joe Biden this time.

As I’ve thought about it, to try to understand it — as you know, I’ve written a book on the whole Clinton matter. Rightly or wrongly, there had developed a personal dislike for Hillary Clinton and a dislike for the concept of more Clinton. That did not exist at all for Joe Biden. It was hard for people to work up a good hate for a guy like this.

In that sense, I think [Biden] was a perfect candidate in a place like Pennsylvania … When you stop and think about it, even with the power of incumbency — which is a significant power — President Trump wasn’t able to overcome that in Pennsylvania.

Between 2016 and 2020, was either result an anomaly? Pennsylvania went blue in 2008 and 2012, so was it an exception that Trump carried the state in 2016?
I don’t know if any of these are an anomaly; we are who we are here in Pennsylvania. We’re a combination of people living in urban centers, including more progressive voices and views, and people living in rural areas — and they’re all good people who are trying to figure out the best thing for the state. I think we’ve been that way for a period of time.

I do think if you had a different candidate than Donald Trump, you could have easily tilted in a different direction as well. It was so close, on this little see-saw; in this case, Joe Biden was able to overcome it.

For the second straight election, three big Great Lakes states — Pennsylvania, Michigan and Wisconsin — voted the same. What makes Ohio so different?
That’s a very tricky question. I’m not sure there’s a simple answer to it. If you look at Wisconsin, for instance, it historically had a strong progressive streak dating back 100 years. That isn’t a total surprise.

I think it’s all tied up in the economy and the perception of which party is going to help people the most. In Ohio, for some reason, the notion that President Trump was strong on the economy and we would be in a better position were it not for COVID probably won out there. Why that was felt more strongly there than in these other states, I’m not sure.

Legal challenges to the election result have been filed in many places, including Pennsylvania. Obviously, they’re unlikely to change the result of the election — in your view, though, do any have merit?
I haven’t seen any merit to any of them. You have to step back and realize that President Trump ran as an anti-politician candidate; he ran as Mr. “Drain the Swamp.” People had a good look at that for four years; I think this election with, now, a five-and-a-half million vote lead for Biden is a referendum on Donald Trump’s norm-busting approach. If you decide that you’re going to blow up all the norms … it’s like going for the long bomb in a Steelers game. It either works or it doesn’t.

The likelihood that this is going to change because there’s some hidden, fraudulent scheme to make those votes come out that way is hard to fathom … It’s almost impossible to change a result this massive. Look at Pennsylvania; we’ve now exceeded a 50,000 vote difference … I don’t see how it is that you make any dent in these numbers just by the hearsay that someone didn’t get to look at one ballot while it was being counted.

These sorts of wild accusations are offensive to the local officials and citizens who have worked with the threat of COVID and harm to themselves by doing this job — it’s an insult to their honesty and integrity. These people aren’t cheaters.

Could there be any surprises, legally? I know that the loser of a race does not have to concede to make the results official, but could anything unexpected happen?
Not that I know of. There are obviously maneuvers — if this was closer than it is, and it was down to one electoral vote, then you would have issues about the “Faithless Elector” … But that isn’t the case, now, because it’s an overwhelming victory for Biden.

This all happens relatively quickly at this point. You’ll have, perhaps, a few recounts, and that’s fine. It’s a shame because it costs a lot of money — and frankly, there are much bigger things confronting our country that we should be spending our time, money and brainpower on, namely the virus … Ultimately, each state has to certify its election results, and that has to be done by Dec. 8. It depends on each state law, but the person who then certifies the results officially is usually the governor or secretary of state. So you’re looking at Democratic governors in Pennsylvania, Michigan and Wisconsin — the scenario that that is going to be thwarted by some kind of plot, I just don’t see it happening.

The [legal challenges] have to happen by Dec. 8, too. If there are any court challenges, they would have to proceed very quickly … Bush-Gore [was] certainly a very different situation, where you had an actual practice in counting votes that produced uncertain results. The intent of the voter is the ultimate test under law in all of these things; you don’t have that sort of thing here.

The electoral college votes in December and you’re done at that point.

Does the contentious end of this election concern you? Should Americans be worried about the tenor of our elections after 2020?
Well, yes. But the contentious behavior of President Trump in office for four years concerns me. I believe strongly that our country is at its best when we’re working together and not at each other’s throats. Intentionally, he adopted a different strategy of governance, trying to divide people … Maybe it worked for him for a period of time, but I don’t think that’s a formula for success for our country.

I want our students at Duquesne — and I think most presidents of universities feel the same — to learn how to be respectful when dealing with others … That civility, in my view, is an essential part of leadership more broadly.

It does worry me that we have moved as a nation to being OK with this kind of street brawling, food fighting sort of approach to running our country. I don’t think that that is the best that America is capable of, and I don’t think it produces the best results. I do think it’s going to take time to undo some of the damage that has been done … It’s going to be essential that we learn the lesson from this presidency that it actually sets us back if we take that [contentious] approach.