Droids Have Taken Over Downtown

A guide to the must-see downtown inventions of Project Pop Up! 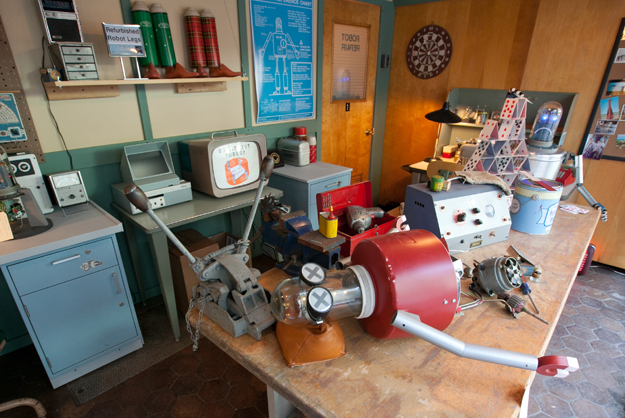 From a robot repair shop on Sixth to a seemingly interactive movie-theater audience on Wood, vacant downtown storefronts are coming alive. These endeavors are part of Project Pop Up — a collaboration between the mayor’s office, the Urban Redevelopment Authority and the Pittsburgh Downtown Partnership — aimed at revitalizing downtown by offering rent-free space to new businesses and art installations.

The hope is that when the free-lease periods (which range from six to 12 months) expire, the pop-ups will become successful paying occupants. While most projects are either retail or artistic endeavors, some combine both aspects — like Fraley’s Robot Repair, an installation by local artist Toby Fraley. Though Fraley’s space appears to be a working repair shop for malfunctioning ‘bots, it’s actually an elaborate work of art. (So don’t head downtown with that Roomba your dog tried to eat a few years back.) Fans can buy merch — hoodies, shirts and more — displaying the Fraley’s logo at pghrobotrepair.com.

Intrigued? Here’s our rundown of the current installations, business and bright ideas given a downtown home by Project Pop Up.

Fraley’s Robot Repair, 210 6th St.
Though Fraley’s space appears to be a working repair shop for malfunctioning ‘bots, it’s actually an elaborate work of art. (So don’t head downtown with that Roomba your dog tried to eat a few years back.) The eye-catching installation by local artist Toby Fraley offers a first-rate photo op — and once you get home, log on to Fraley’s website to grab some merch with the Robot Repair logo. (pghrobotrepair.com)

Main Feature, 420 Wood St.
The mock box office here won’t sell you any tickets. Because you, walking by on Wood Street, are the attraction. Stop in front of this storefront and you’ll see a life-size video display of a rapt audience gazing at you – and you might even earn a round of raucous laughter or a standing ovation. Not matter how much they like you, though, they won’t share their popcorn.

Society for the Advancement of Miniature Curiosa, 929 Liberty Ave.
This space serves as a combination toy parlor, performance space and workshop, and aims to resurrect a spirit of wonderment and curiosity. This Pop-Up is a recreation of a 1919 project of the same name, then housed in a San Francisco train car; the original incarnation of the Society is rumored to have crossed paths with some of the 20th century's most influential individuals, such as Edison, Lindberg and even a young Albert Einstein. (miniaturecuriosa.com)

Symbiotic Collusion, 131 Seventh St.
This uniquely named Pop-Up brings together musicians in both an educational and performance capacity, with a variety of outcomes. The project features performances from Beethoven to Radiohead, including original works in a wide variety of styles. A number of concert series have already been announced, including a chamber series, a pop series and an intriguing midnight music series. (symbioticcollusion.com)

Boutique 208, 208 Sixth St.
As the name might imply, Boutique 208 strives to make the very best of Pittsburgh available to the masses. This eclectic boutique offers handcrafted wares from a number of local artisans, as well as a variety of unique workshops on subjects ranging from jewelry to skin care — and more.

Summer Sky Eternal, 604 Liberty Ave.
It's hard to miss this Liberty Ave. Pop-Up, with its vibrant colors and motion graphics. The installation makes use of computers, projectors, various sensors and state-of-the-art video screens to produce vibrant interactive images and games that are sure to grab your attention. All viewers need to do is step close to the screen to see how their mere presence affects the display. (summerskyeternal.blogspot.com)

Dream Cream Ice Cream, 539 Liberty Ave.
One of the more philanthropic (and delicious) of the Pop-Ups, Dream Cream Ice Cream does more than just dish out soft serve. Each of the parlor's custom flavors serves as a fundraiser for a different cause. The causes are chosen by the shop's volunteer employees (dubbed "dreamers"); each dreamer selects their own custom flavor and, at the end of each month, Dream Cream donates 25 percent of that flavor's proceeds. (dreamcreamicecream.weebly.com)

Awesome Books, 929 Liberty Ave.
Awesome Books, one of Pittsburgh's newest bookstores, first opened its doors in Bloomfield in 2010. Now, thanks to Project Pop-Up, co-owners Bob Ziller and Laura Jean McLaughlin have lined the shelves at a new location. Like its first home, Awesome's second site boasts thousands of volumes and a section dedicated to locally produced books and magazines — and of course, a unique space to match. (smallpresspittsburgh.wikispaces.com/Awesome+Books)

Community, 422 Wood St.
This installation brings together a number of unique devices — morphing portraiture, analog television sets, a wall of personalities and identities, and more — all in hopes of demonstrating the importance of community.

The Steel Curtain, 1035 Penn Ave.
This hard-to-miss Pop-Up gives Pittsburghers a look back at the iconic Steelers of yesteryear. Catch a glimpse of the ‘70s “Super” Steelers frightening front four — L.C. Greenwood, Joe Green, Dwight White and Ernie Holmes — in this historic display.

BikePARK, Third Ave. Garage
BikePARK, Bike Pittsburgh's contribution to Project Pop-Up, is exactly what its name would suggest: a secure place to park your bike downtown. This Pop-Up offers bikers a secure and weather-protected space to store their bikes while they explore the city on foot. Just like a normal parking garage, monthly memberships are available. (bike-pgh.org)

This article appears in the April 2012 issue of Pittsburgh Magazine.
Categories: Community Feature