Drinks With Some Spirits at Harmony Inn

The historic (and purportedly haunted) Harmony Inn is a fine stop for drinks and food. 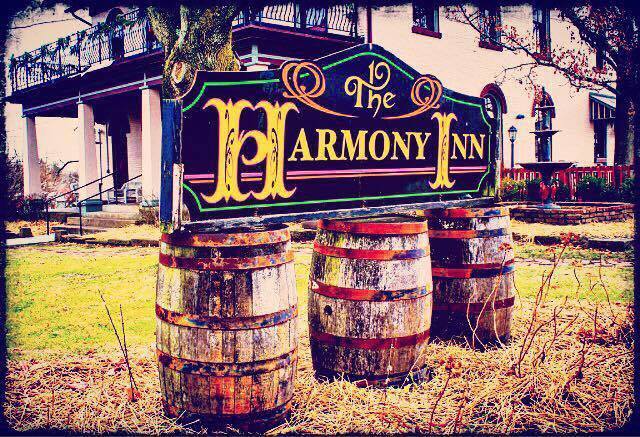 What with the region’s finer Halloween attractions already up and running, we are firmly in the haunted part of the year. And while Downtown’s longtime go-to for brews and boos (OK, I’m already sorry I wrote that), Papa J’s Centro, has closed its doors, there’s still a fine place for those looking to share their beer with a friendly ghost.

It just involves a bit of a drive.

The Harmony Inn, housed in a structure dating back to 1856, has been selling drinks for quite some time; the bar and restaurant’s website touts it as one of the first licensed saloons in Butler County. As part of Harmony’s well-maintained historic district, the setting on a late-summer, early-fall evening couldn’t be much more picturesque — and haunted or not, the inviting building encourages visitors to stop and sip. (You’ll know the place when you see it; two upstairs windows have always given the effect of eyes peering down at the street, an effect aided by a recently added moustache.)

But it is purportedly haunted. A collection of tales appears on the website; press staff for their own tales, and they’ll agree that plenty of spooky things have happened on the premises. Those I spoke with quickly added that in this respect, the Inn isn’t much different from the rest of the town — the odd, rich history of the town simply makes for plenty of folk tales, many of which tend towards the uncanny.

I didn’t encounter anything unusual, though the place was so bustling on my visit that the spirits might’ve just been occupied with other guests. But I did have a pretty fine time.

If you’re just drinking, you have two options. There’s an indoor bar that captures the building’s quaint vibe (though seating is a bit cramped) and an outdoor patio area, complete with its own bar, that should be amenable until the weather gets truly frigid. I should note that service was notably slow when I saddled up, waiting for a table; it was a busy Friday night, so that’s forgivable, but we did feel a bit overlooked. Servers and hosts were polite and attentive, in contrast.

The latest incarnation of The Harmony Inn — it reopened in 2013 — is under the purview of Bob and Jodi McCafferty, also owners of North Country Brewing Company. North Country is one of my favorite area breweries, and I was pleased to find that a good number of their offerings were available at the Inn, along with a respectable list of choices from other breweries. A nice selection of whiskeys is available as well; the cocktail list would be a bit passe Downtown but should have a choice to please most palates.

While you could certainly visit just for drinks, I wouldn’t recommend it; the menu is focused on German-style comfort food and carries the generous portion sizes that North Country’s flagship brewpub is known for. If you’re planning on driving straight back from the Harmony Inn, know you’ll be doing so with an impressively full stomach. My companion and I both selected from the list of spaetzle dishes, so I now know what spaetzle is. And it’s delicious. (I won’t ruin the surprise if you haven’t encountered this filling dish before.)

If you’re making a weekend trip, prepare for a wait; the restaurant doesn’t guarantee reservations (though you can make a request; call ahead). Perhaps the best way to enjoy this place — and increase your chances of encountering one of those long-passed Harmonists — is to make a late dinner of it, filling up then sipping whiskey until closing time.

If you do catch a ghost, just tell me exactly when and where you made it happen. I’m in the Halloween spirit.