Drink It In: The Best Place to Get Drunk on Pittsburgh's History

PittGirl shares the fascinating stories behind a chair, china, and a homemade toy. 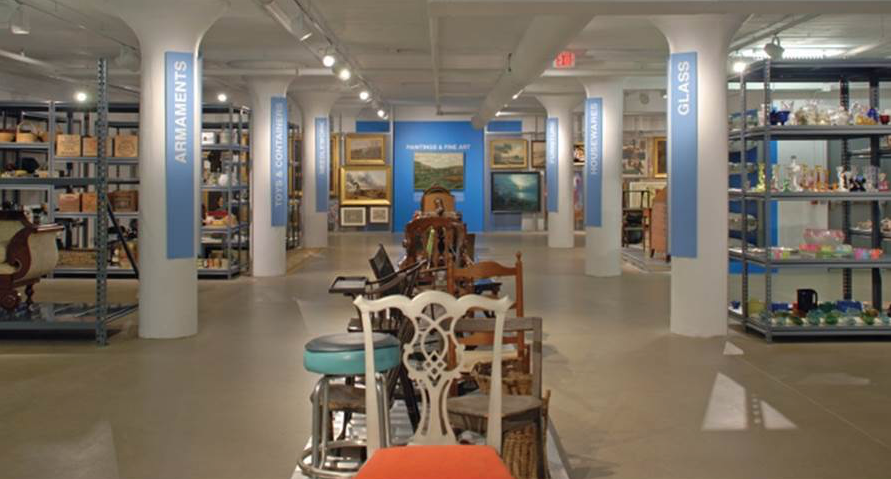 I attend a lot of churches in Pittsburgh.

I have my churchy church.

I have my bakery church where I worship at the altar of burnt almonds.

I have my antique church: Miller’s Crossing Fleatique in Irwin (please don’t buy anything Pittsburgh-related from the turn of the century. I call dibs on all of it. Respect the Dibs.)

I have my yoga church where I’m instructed to scoop up my anxieties and offer them up to the anxiety-quashing spirit while crouching and balancing on one foot in a manner that makes me look like someone tied a praying mantis in a knot.

And my history church. The Senator John Heinz History Center. Where I commune with my city’s past. Drink in the old until I’m drunk with the need to lay my hands on things that will get me kicked out and banned should I actually lay my hands on them.

I think the thing that separates those who are merely interested in history, or rather, aren’t completely knocked unconscious with boredom over it, and those, like me, who are passionate about it. Obsessed with it. Get completely turned around and lost in it … is that we make it alive. It’s not a black and white picture; it was an in-color live moment in time. It’s not a painting of the Point from the 1800s; it was a man, obsessed with his vision, standing before a blank canvas, determined to unveil the soot, smog, industry, water, his gritty love. You put yourself in the room with him and you watch the painting unfold. That’s when history breathes.

The History Center’s new Visible Storage, where items not currently or yet on official display are housed, now is partly accessible to the public. When I was treated to a sneak peek, I asked the questions and did the research to make items come to life for me. I allowed them to breathe. Let me share just three of them with you.

1. A chair belonging to the first mayor of Pittsburgh, Ebenezer Denny
I’ve already taught you a little about Ebenezer Denny. He had red hair and blue eyes. He was a Revolutionary War hero. Denny Street in Lawrenceville is named after him.

This is his chair, resting in visible storage at the History Center. 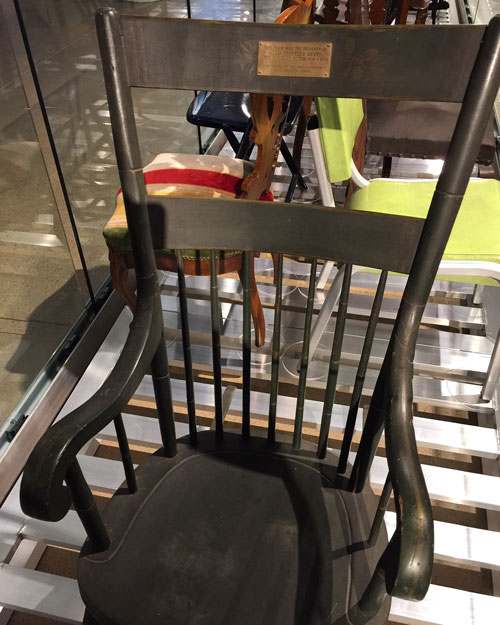 Let me make it come alive for you.

This is Ebenezer as he appears in an illustration in his Military Journal, which you can read here: 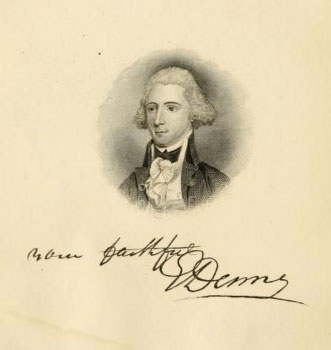 When Ebenezer was 13-years-old, he felt compelled to help his family with money, so he took a position as a dispatch carrier for the Fort Pitt regiment. Trusted with important messages at a young age, he crossed the Allegheny mountains alone in this role, sleeping on the open forest floor with any company of soldiers or men he happened across on his way.

At 13-YEARS-OLD. My son is 13 and I don’t even let him leave the subdivision unaccompanied, let alone TRAVERSE A RANGE OF MOUNTAINS WITH NO SHELTER TO BE HAD.

Here is how he described the end of the Battle of Yorktown, when he was 20-years-old, the very battle that jerk Captain Von Steuben would take the ceremonial flag from Denny and plant it himself like some kind of jagoff:

18th – “Several flags pass and repass now even without the drum. Had we not seen the drummer in his red coat when he first mounted, he might have beat away till doomsday. The constant firing was too much for the sounds of a single drum; but when the firing ceased, I thought I never heard a drum equal to it – the most delightful music to us all.”

Before he was mayor, Denny was a banker and a businessman who ran a store and military commissary out of his house on the corner of Market and Third Street … a house he built from the bricks of Fort Pitt!

The first mayor of Pittsburgh … lived in a house on Market and Third … that he built … with the bricks of Fort Pitt … the Fort he worked for when he was 13-years-old. The Fort he fought at. The Fort he defended.

I want to type that 40 times so you can really see the beauty of it.

Ebenezer Denny dedicated his life to the military and to Pittsburgh. He was by all accounts brave, steadfast, reliable. And that’s his chair you can go look at today. It’s alive.

(One more thing, Denny was married to the sister of William Wilkins, for whom Wilkinsburg was named. Small world.)

Marguerite threw the best parties. Marguerite blossomed from a middle-class housewife to an incredibly wealthy, charitable, sought-after, adored maven of Pittsburgh’s and New York’s high society. Her dinners, diamonds, dresses, parties, teas, and receptions were the talk of the society pages in every local newspaper and journal.

This is her china, and that it is yellow is pretty much my favorite thing ever: 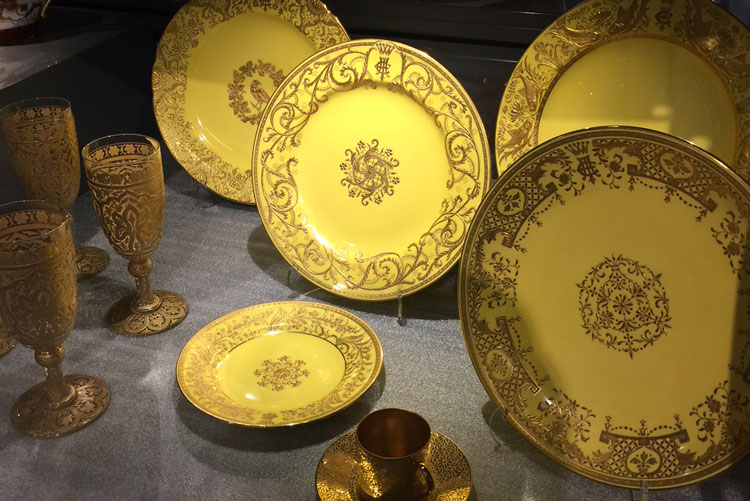 This is Marguerite (with that George guy who invented some important stuff, but let’s talk about Marguerite) in the early days of her marriage. She lived from 1842-1914: 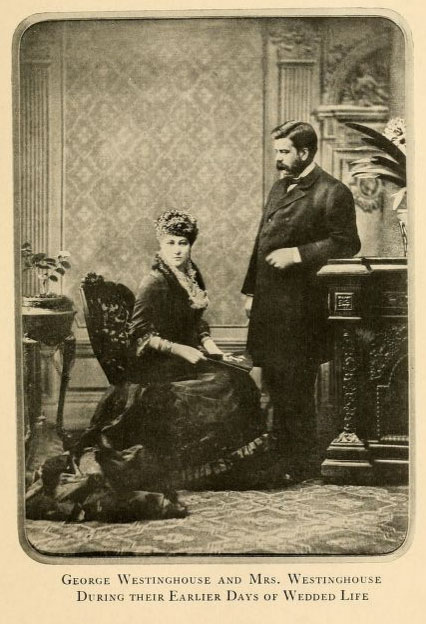 These are her initials: 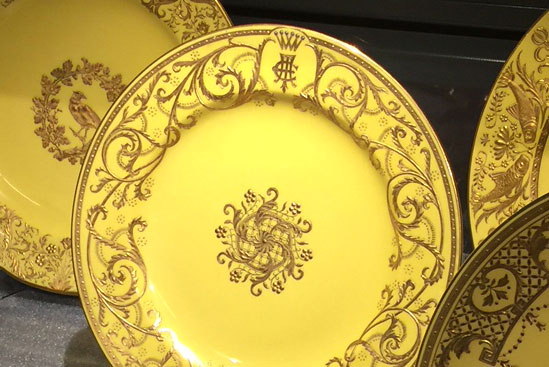 You see the M and the E with the two Ws above? Marguerite Erskine Walker Westinghouse.

These plates were used in this house, “Solitude,” which once stood where Westinghouse Park is located. 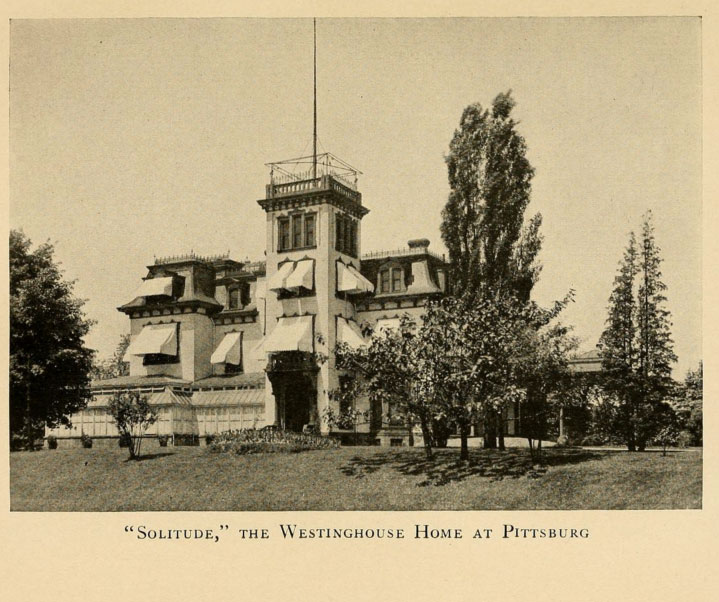 Here’s how The Social Mirror described her and her “table appointments” such as this china:

“Her table appointments are simply superb, the entire service being of solid silver and gold (whose cost it would be idle to attempt to guess), and the cut glass, Sevres, Dresden and other fine porcelains are worth a small fortune.”

Princes, dignitaries, princesses, barons, mayors, governors, colonels may have dined on these plates and drank from these cups, right here in Pittsburgh. Go see them and imagine it.” 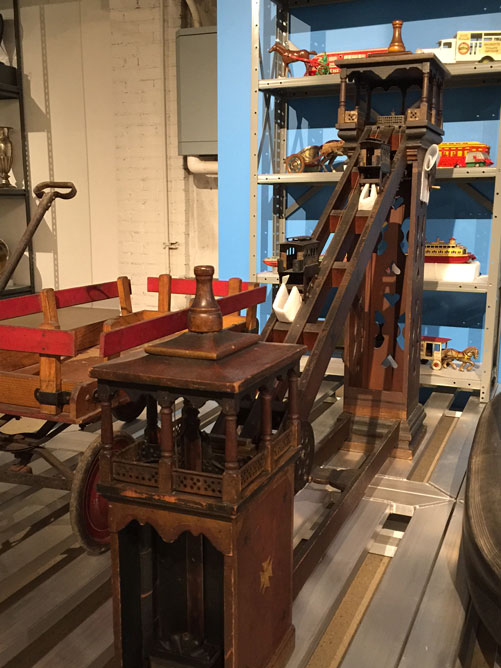 It’s a toy! And not just a toy, but a toy handmade by a Pittsburgher named Conrad Rossman.

Conrad immigrated to America in 1867 from Germany, and settled in Knoxville. He was a machinist on the South Side and when his son William was born in 1879, he began building this toy. A WORKING model of the Monongahela Incline.

Notice the crank wheel on the side that will push the cars up and down the track. Notice the details of the cars and the upper and lower buildings.

Here’s where it comes alive: As I said, he started building this toy in 1879, and according to the History Center, it was finished around 1882. THREE YEARS.

This immigrant. This machinist. This Pittsburgher spent three years lovingly and painstakingly building a gorgeous working incline toy for his son, who clearly cherished it as it was gifted to the History Center by William’s wife in memory of her husband after his death.

Go visit the new Visible Storage. Ask questions. Do some research. Make those things come alive for yourself and I promise you’ll go away with a greater love and richer understanding of your city.

This article appears in the February 2016 issue of PittGirl.
Categories: PittGirl