When Mark Met Mallory.
When a coworker at her new job jumped at the chance to join her team during an afterwork pickup soccer game, Mallory Smith took notice. Mallory, originally from Robinson Township, and Mark Spirnak, from Munhall, both were working at Bechtel Plant Machinery Inc. at the time and bonded during breaks in the game.

“He’s a really outgoing person, and I’m a little more shy,” Mallory says. “He was very nice and made me feel really comfortable.

“We had so much in common. We hit it off right away.”

A memorable first date at Eleven in the Strip District launched five years of courtship, and later, was the location for the couple’s rehearsal dinner.

She Said Yes.
In 2016, the pair traveled to Delray Beach, Fla., so Mark could visit one of Mallory’s family’s favorite vacation spots. Toward the end of the trip, they opted for an early morning walk on the beach. Before they left, Mark told her he needed to change his swim trunks for a different pair, claiming the first set didn’t fit. What he didn’t tell Mallory was they actually lacked pockets, and he had nowhere to hide the ring.

Mallory also found it a bit odd when Mark didn’t indulge her request to bask in the sun a bit before they embarked but insisted they begin their walk. His reasons became clear when, during their stroll, he stopped and dropped to his knee, giving an ecstatic Mallory a shock.

“At the time, I had no idea, but looking back there were some signs,” Mallory says with a laugh. 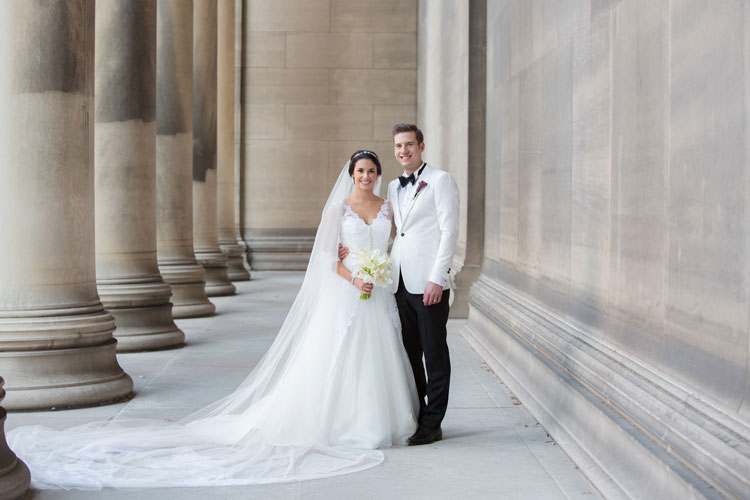 The Big Day.
Mark and Mallory created a day full of special touches and meaningful moments. Everything from what they wore to the ceremony program carried significance.

“It was so much fun to spend time with them and put my vision of the dress together,” Mallory says.

Mallory and her family also used the custom gown as a way to honor her father, Robert, who passed away in 2016. They sewed the pocket of one of his blue dress shirts — her “something blue” — into the dress to hold a gold medal he had worn around his neck every day — her “something old.”

The couple used their ceremony program to explain such details to their guests as well as to share special thank-you messages to friends and family and heartfelt dedications to loved ones.

A celebration at Noah’s Event Venue in Cranberry Township encouraged mingling with open seating, lounge areas, dessert and food stations and a Pittsburgh cookie table with more than 2,000 cookies made by Mark’s family. Guests also enjoyed a cigar station, a backdrop for photos, complimentary flip flops and all-night entertainment provided by a 10-piece band.

“We were so thrilled to have been able to plan a night that everyone enjoyed,” Mallory says.

Happily Ever After.
After a Hawaiian honeymoon, the couple, both 30, returned to their condo in the Strip District. Mallory, who is still with Bechtel Plant Machinery working in contracts, and Mark, now a sales representative for Omya, enjoy checking out all the ever-changing local dining scene has to offer. 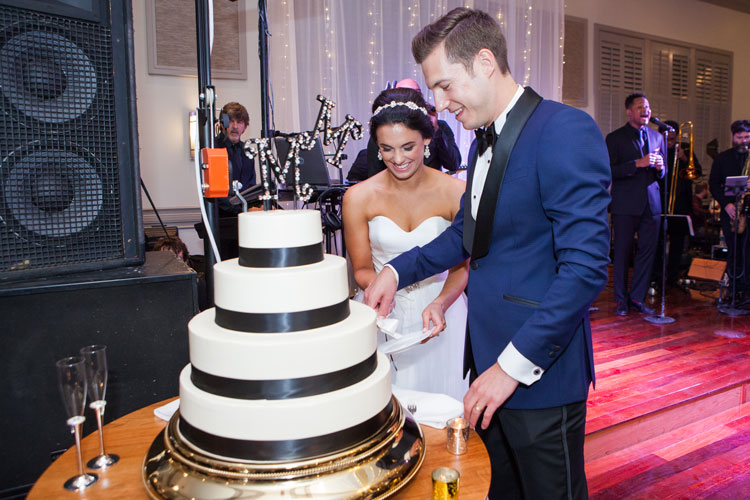