Lupus is one of 80 known autoimmune disorders, which affect the body's system of specialized cells and organs that defend against germs. Diagnosis is an art, not a science—with no single blood test available to make the diagnosis certain.

When Curtis Nugent’s knees began to ache, the athletic 19-year-old shrugged: too much basketball, thought the freshman at Robert Morris University, assuming the joint pain would subside. He didn’t know it was the first shot in his body’s war with its immune system.

His organs began a seven-month free fall. His kidney function crashed, and he was rushed to UPMC Presbyterian Hospital in April 2005. The diagnosis astonished his family: It was systemic lupus erythematosus (SLE)—often referred to simply as lupus, an autoimmune disease that affects more than 1.5 million Americans.

Nugent had a highly unusual case of a complex disease within a little-understood field; more than 50 million Americans suffer from autoimmune diseases, including Crohn’s disease and multiple sclerosis. Lupus, in particular, presents itself in so many different ways—from heart problems to skin rashes and arthritis—making diagnosis difficult.

The disease is rare in men, who comprise only 10 percent of patients. It is far more common in young women, striking Hispanics, Asians and African-Americans in particular. Symptoms may subside and reoccur over decades, and there is no cure.

“Lupus affects a lot more people than people realize,” says Nugent, now a 24-year-old elementary school teacher in the Wilmington School District. “I was fortunate it was caught in time. I’ve heard other stories—people don’t catch it in time, then need transplants or dialysis. Lupus hides itself so well it looks like other diseases. It’s hard to diagnose.”

His early diagnosis came from Dr. Susan Manzi, one of a limited number of lupologists worldwide. To Manzi, chair of the Department of Medicine at West Penn Allegheny Health System and director of its Lupus Center of Excellence, the bewildering disease is not just a professional specialty—it’s a personal mission.

Lupus is often called “The Great Impersonator,” mimicking indicators of other illnesses. Diagnosis is an art, not a science—with no single blood test available to make the diagnosis certain. Treatment has relied on therapies borrowed from other diseases, such as chemotherapy and drugs used to prevent organ-transplant rejection. “We think of our patients as snowflakes,” says Manzi. “No two are alike.”

But Manzi and her colleagues are cheering the recent approval of the first new lupus drug to be developed since 1955. The team at the Allegheny Singer Research Institute, the research arm of West Penn Allegheny, helped design the trial for the new monoclonal antibody, dubbed Benlysta, in which her patients participated.

Manzi calls the resulting process “self-sabotage.” The research challenge, she says, is: “Why would that happen in an otherwise healthy 20-year-old and change her life? You have to know every aspect of medicine—brain, kidney, skin—to treat lupus. It’s a comprehensive disease that is best managed by a team of specialists.” 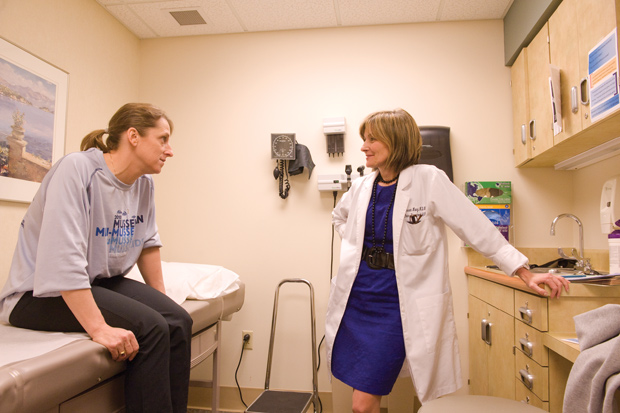 On the Cusp of a Breakthrough

Lupus is one of 80 known autoimmune disorders, which affect the body’s system of specialized cells and organs that defend against germs. Some, like AIDS, are caused by weak immune systems that render the body vulnerable to a host of infections. Lupus falls at the other end of the spectrum, revving up the immune system for outbreaks called flares.

Treatment for the disease, Manzi notes, has improved considerably in her lifetime. “Once steroids came on board, survival rates advanced to 70 percent over five years,” she says. “Corticosteriods [which suppress the overactive immune system in lupus patients] are extremely effective but extremely toxic.” Side effects can include bone loss, weight gain, hypertension, diabetes and cataracts. “So, we try to minimize their use,” she says. “But sometimes we can’t.”

Nugent controls his disease with an arsenal derived from other illnesses. He undertook a six-month course of cyclophosphamide, a chemotherapy agent used in oncology. When that failed to help, a switch to mycophenolate mofetil (CellCept) helped him avoid a kidney transplant.

The limited drugs available for Nugent and Manzi’s other patients frustrates her. “We’re ridiculously behind and borrowing toxic treatments from other specialties,” she says. “But I’m happy to say we’re on the cusp” of a breakthrough with the approval of Benlysta, an injectable drug.

The new therapy offers promise as does a range of new clues on causes of the disease. Manzi says that large long-term studies of families show that lupus often has a genetic component.

That was not so for Nugent; no one in his family was ever diagnosed with the illness. But when a twin, sibling or parent has an autoimmune disease, the risk of lupus is elevated.

Aside from genetics, a wide range of outside factors may trigger the onset of the disease: Sometimes it’s a virus or infection. Medicines used to treat infections, such as sulfa drugs like Bactrim, could possibly be the trigger. Hormones and pregnancies seem to be linked to cases in many women, as are exhaustion or stress.

Exposure to ultraviolet light—like during a beach vacation—is often involved. “Young women may present [to the Center] after spring break in Cancun after prolonged exposure to sun,” notes Manzi. “In individuals with the right genetic background, intense exposure to ultraviolet light may activate the immune system and trigger the disease.” The connection between depression and immune function is also real, though not well understood. “People are beginning to think it’s a cycle—there are clear links between depression and premature heart disease,” says Manzi, who is one of the nation’s leading researchers on the frequent and premature cardiovascular issues seen in lupus. The mind-body relationship is the focus of the center’s research with Dr. Carol Greco of UPMC. The psychologist’s use of acupuncture, biofeedback, relaxation training and other cognitive behavioral therapies has special resonance for lupus patients. “We’re big advocates of alternative therapy,” says Manzi, noting that it has resulted in benefits for pain management, a common problem in lupus. 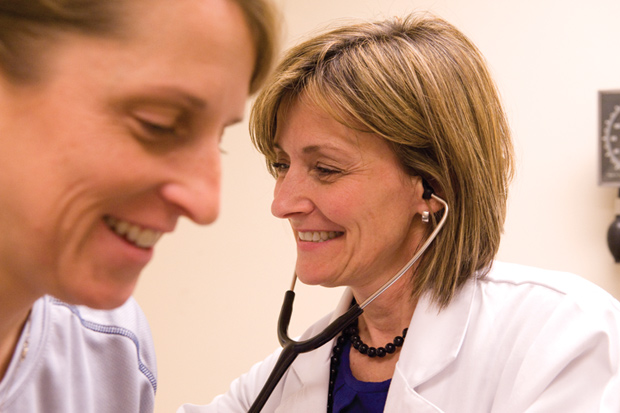 “We now have the tools to make a change and move the field forward,” Dr. Susan Manzi says.

“Stem-cell therapy is getting attention for auto-immune diseases,” she says. “It may be fruitful. Stem cells are a potential cure. Replacing the patient’s own immune system is risky, yes, but it could have a major curative impact. It’s an area worth investigating.”

During the past year, five other well-known researchers have joined Manzi’s team, expanding one-stop treatment options for patients. The Lupus Center is one of the best-funded components of the Allegheny Singer Research Institute, with $5.3 million in grants.

“What we’ve done with the Lupus Center is unique—we’ve recruited the best of the best doctors in a number of specialties to care for these patients,” she stresses. “It is challenging to manage chronic illness, particularly in young patients. We have a cutting-edge research program that provides our patients access to the latest research opportunities. Thousands of our patients have contributed by participating in a number of research studies that are designed to improve quality of life and ultimately find a cure. Our doctors, nurses, and staff share a level of passion, commitment and dedication to ensure that every patient gets the highest-quality of care.”

Nugent attests to the Center’s high standards. “[Dr. Manzi] never tries to talk over you,” he says. “She makes sure you understand everything. Other patients say the same thing—like you’re the absolute only patient.”

Many patients come from all over the world to see the doctors at the Center. Not all of them have a known diagnosis of lupus. Many are unsure of their diagnosis but suspect an autoimmune illness. While there is no single fail-safe test, the most widely performed test is an antinuclear antibody test (ANA). A negative result is usually (but not always) good news: It suggests against a diagnosis of lupus. But a positive result is not specific to lupus and may be seen in many other conditions such as autoimmune thyroid, liver disease, some infections and even in otherwise healthy individuals.

Small wonder that Manzi, a board member of the Lupus Foundation of America, is leading the fight for more charitable funding for both the cause and the cure for SLE. She has also created a base of support in Pittsburgh.

Since 2001, the Foundation for the Lupus Center of Excellence has raised more than $1 million for the program by hosting events—from a fashion show at Saks Fifth Avenue to Savor Pittsburgh in South Side. The Foundation was created by community leaders in the Pittsburgh region who have been touched by the disease. The funds raised directly support the Lupus Center’s research program. Curtis’s parents, Joe and Janet Nugent, have raised more than $50,000 for the foundation through an annual golf outing, Partners for Lupus Research, held in New Castle every September. As always, Curtis Nugent—this year with his fiancée, Melissa Tukalo—will tee off with the group.

One patient’s story illustrates Manzi’s impatience for a cure: “One young lupus patient of mine suffered for years with many heart and lung issues,” Manzi says. “She died at age 26 of advanced heart disease. I [read] the eulogy at her funeral.” Manzi admits that was the hardest talk she’s ever given.

“I was frustrated that the medical community failed her. We shouldn’t have a 26-year-old woman dying from this disease. We now have the tools to make a change and move the field forward. We know what to do; it is simply a matter of how long it will take. We can get there a lot faster with more federal and state funding and local community support.”

Christine H. O’Toole is a frequent contributor who last wrote for the magazine about Sampsonia Way, home to City of Asylum/Pittsburgh.

This article appears in the May 2011 issue of Pittsburgh Magazine.
Categories: Medicine and Health Features