“Downward Dog” has its share of human characters, but much of the focus is squarely on its title character. 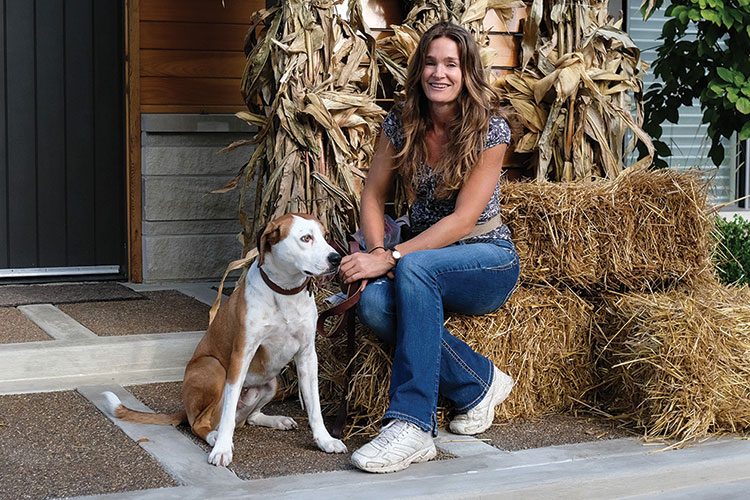 Trainer Tiffany Wall with Ned, the dog known as Martin, in “Downward Dog,” a comedy filmed in Pittsburgh

When actors come to Pittsburgh to shoot a movie, they often stay in a hotel. When they come for TV shows, they frequently rent apartments (the Cork Factory in the Strip is especially popular). But what to do when the star is of the canine variety?

For the upcoming eight-episode first season of the ABC comedy “Downward Dog,” which shot its pilot in Pittsburgh in December 2015 and the remaining episodes in fall 2016, the trainer for the show’s dog lived in Swissvale, not far from the program’s primary location, a home in Regent Square.

“Production rented a house for us with a huge, 1-acre, fenced-in backyard,” says Sarah Schwaiger, trainer for Ned, who plays Martin on “Downward Dog.” “So when we get home and on weekends, the dogs can just be dogs. Ned works so hard all day long, we like that when he’s home he doesn’t have to be leashed and restrained. He can just kind of let loose.” 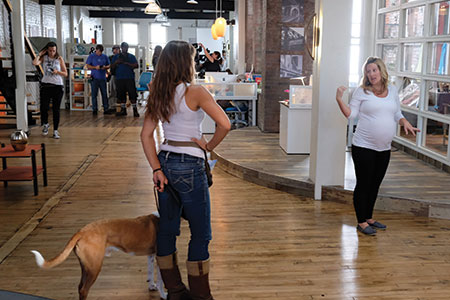 “Downward Dog” is based on a web series created by Pittsburghers Michael Killen and Samm Hodges of Animal Media Group, a local production house. The show is produced by ABC Studios and Legendary Television, a division of founder Thomas Tull’s Legendary Entertainment. Its airdate is not set, but four episodes will screen this month at the Sundance Film Festival.

​Killen has wanted to do something longer-form with talking animals — he worked on the 1990s Taco Bell-talking Chihuahua campaign and developed a technique to make a “talking” animal look realistic — and he eventually teamed with Hodges on the concept for the “Downward Dog” web series.

The dog used in the web series, Sadie, was too old when it came time to make the ABC prime-time show, so producers worked with Frazier Park, Calif.-based Steve Martin’s Working Wildlife, which specializes in training and placing animals in TV shows and movies, to find a suitable canine to play Martin. He’s the mutt with a co-dependent relationship with his owner, Nan (Allison Tolman, “Fargo”). Viewers see and hear Martin speak (Hodges performs Martin’s voice); Nan does not.

“He was really focused on the eyes,” Schwaiger recalls of what Killen looked for in casting Martin. “He knew what he wanted and we just didn’t have it, so we started looking in shelters all over the United States, looking at pictures online.”

They found Ned in a Chicago shelter, brought him to Los Angeles for two months of training and then flew him to Pittsburgh to film the “Downward Dog” pilot in 2015. 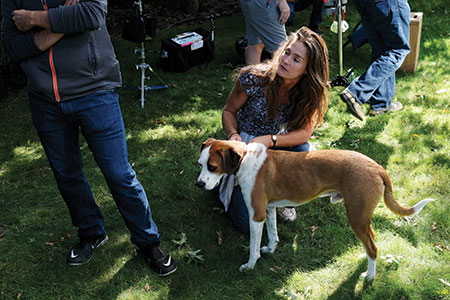 Working Wildlife animals live with their trainers, so Schwaiger has gotten to know Ned well. And while the show would like to have a body double for Ned, so far they haven’t found one.

“He’s so unique looking, it’s going to be really hard to find a double,” says Schwaiger, who guesses Ned might have some hound and/or pointer in him.

“Downward Dog” has its share of human characters, including Nan’s boyfriend (Lucas Neff, “Raising Hope”), best friend (Kirby Howell-Baptiste) and ad agency boss (Barry Rothbart), but much of the focus is squarely on its title character. Scripts even refer to the home Martin shares with Nan as “Martin’s house.”

“Clearly Martin really is the main character,” Tolman says. “We’re all here to serve him, and he gets the best lines and he’s the most endearing. There’s really no competing with an adorable dog. I think people are really going to love him.”

This article appears in the January 2017 issue of Pittsburgh Magazine.
Categories: Arts & Entertainment, From the Magazine