PM intern Amanda Myers recounts the radio-rock adventures that life as a Downtown student has made possible. 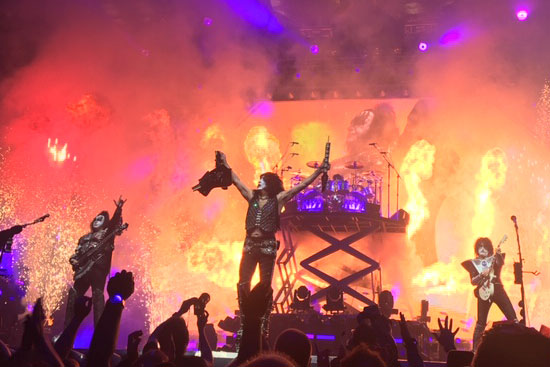 It started with the radio. WDVE was background noise growing up, blending classic rock with Sean McDowell’s velvety voice.

My mom was (and still is) an avid giveaway caller at a number of local stations; when they give away tickets to a show, she grabs the phone. My parents often trekked to concerts at “Star Lake,” as they insist on still calling it. I was a Beatles obsessive by the time I was in middle school, but seeing Kiss live solidified my stake in the genre.

I was bitten by the rock bug. (The rock Beatle?)

Major losses like Tom Petty and recent ailments suffered by Mick Jagger and Ozzy Osbourne, along with increasingly routine farewell tours, signal the end of an era. It’s now or never to see these legends in the flesh.

Luckily, living in Pittsburgh gives classic rock fans a bevy of diverse venues (in feel and size) for any kind of connection. We’ve been blessed as a stop on some of the most hyped rock tours in recent years, a trend that continues with our lineup for 2019: The Who, Jeff Lynne’s ELO, Phil Collins and more.

Moreover, the number of venues in prime Downtown locations make for great accessibility — for anyone who can get to the Golden Triangle, but especially for the student population clustered around Downtown.

Immediately upon opening, PPG Paints Arena became one of the city’s preeminent concert destinations. Last summer, we were visited by The Eagles, Def Leppard and Rod Stewart, with farewell jaunts in the fall from Elton John and Paul Simon.

Even though an arena show can be more costly, you can’t beat the sensory experience. Last month, my face nearly melted off as I sat fifth-row center at Kiss. Paul Stanley shooting me a glance amidst searing pyro made it worth the admission price.

Historically innovative artists like Roger Waters always come through in the visual department, whether it’s touring with “The Wall” or during his “Us+Them” run. Beyond the spectacle, these shows are a great opportunity for intergenerational connections. I found myself dancing with a mother-daughter duo at The Eagles, who (like me) refused to stay seated during “Hotel California.”

Heinz Hall may be home to the Pittsburgh Symphony Orchestra, but that doesn’t mean it’s not more than welcoming to guitars. Steely Dan put on an excellent show at the venue last October; the performance didn’t require unnecessary flair, relying instead on a string of horn players and back-up singers. It was odd to see so many New Balance sneakers against the red carpeting — Dads were out in droves — but it worked.

Across the street, The Benedum — where I saw Jackson Browne years ago — has serious historical imprimatur. Originally named The Stanley Theatre, the venue was the site of Bob Marley’s final concert (at which my Dad was in attendance). Peter Frampton’s show on July 2 is sure to be a must-see for classic rock fans; he recently revealed his diagnosis of Inclusion-Body Myositis (IBM), a rare muscular disease that will eventually render him unable to play guitar. Seeing him now is essential.

Whether indoors or outdoors, Stage AE gives concertgoers the chance to get up close and personal with notable rock acts. Seeing Alice Cooper play to a packed, pre-Halloween house pre-Halloween was a standout moment. He whacked a bouquet of flowers across his knee right in front of my face, petals dramatically falling to the floor. It was everything you would want from Cooper.

You go to The Who to see Pete Townshend do the “windmill.” You save for a Rolling Stones show to see Jagger shimmy down a runway. And as long as they’re still touring, Pittsburgh remains a great place to see whatever these legendary acts do next.