Steelers Pro Bowl wide receiver Antonio Brown won’t let you get him down. Even if you steal his cleats. 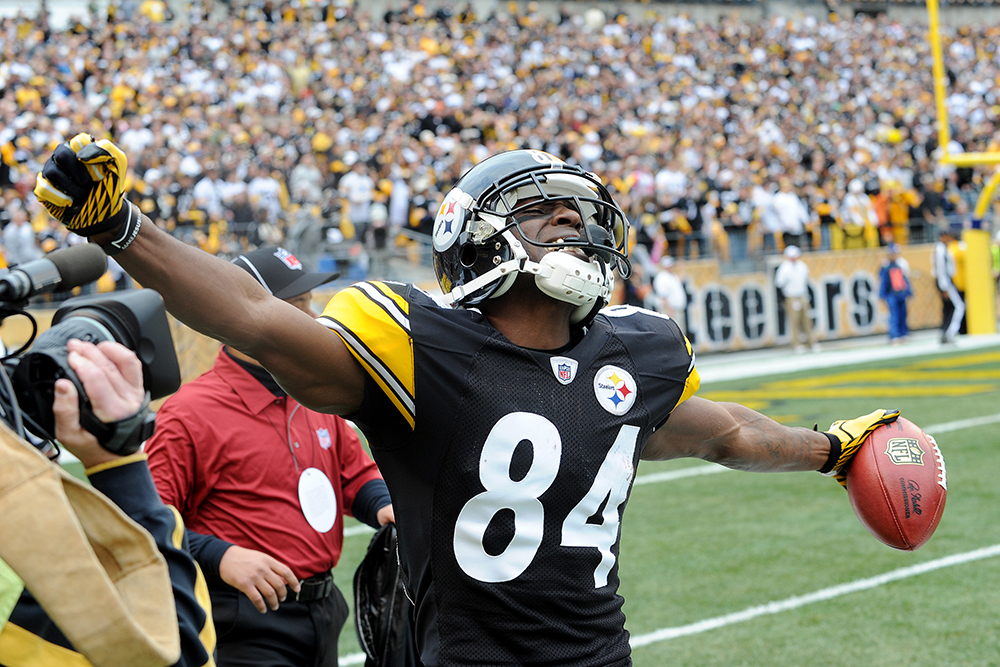 Antonio Brown acts like he doesn’t notice that he’s only wearing one shoe. He’s just run one of his signature routes — a precise 5-yard button hook that will look like an intricate origami figure when it’s drawn up on the telestrator. These kinds of routes are how Brown makes his living now, filling in the empty, treacherous spaces between the hash marks left by his absent mentor. Short, thankless patterns that often end with a dirt-clumped face mask. The types of routes that drive defenders to the point of delirium throughout the course of 60 minutes. In this case, it takes only 29.

Brown turned the first defender to the scene into a flailing-turned-flopping Superman, then hit the open field before Philadelphia Eagles safety Kurt Coleman was forced to take him down, literally, by his shoestring. Frustrated, Coleman took a souvenir with him — Brown’s left shoe.

And that’s when it happens. As Brown bounds up from the sod and heads right back to the huddle without even asking for his cleat to be returned — his tube sock all white against the brownish Heinz Field muck — Coleman gives in to his frustration. He whips Brown’s shoe deep into the Steelers’ sideline like it’s a rolled-up Sunday paper.

“It was a sign of mental weakness,” Brown says. “Right then I knew I had enforced my will upon him. When somebody throws your shoe, you’ve got them beat mentally.”

Instead of freaking out, Brown channels the mentor who taught him how to lather opponents into this kind of conniption: recently retired Hines Ward. W.W.H.D.? It’s a mantra that’s been embedded into the Steelers’ young receiving corps. What Would Hines Do? He’d just smile.

“So I didn’t say anything to him,” Brown says of the brouhaha. “I just smiled and ran to the sideline. That’s what got him.” It’s not just the I’m-having-more-fun-than-you grin. It’s that familiar post-catch bounce — an infuriating bunny hop that Ward bequeathed to his understudy.

But in order to understand the improbable success of Brown, a sixth-round draft pick in 2010 who made his first Pro Bowl last season, you need to understand another acronym — a message that Brown sends out to his 140,000-plus Twitter followers every single day: C.U.E.U.P.U.

“Chest up, eyes up, prayed up,” Brown explains, sitting at his locker at the team’s practice facility, trying to ignore the little-brother charades of pal Mike Wallace, who makes it a point to mess with the mild-mannered Brown on the rare occasions that he grants an interview.

“C.U.E.U.P.U. is something I came up with as a daily inspiration,” Brown says. “It’s a constant reminder that if I live with my chest up and my eyes up, and I’m prayed up, I can handle anything life throws at me.”

Life has thrown plenty at Brown, who grew up in Miami’s notoriously violent Liberty City neighborhood. Due to a complicated family situation, Brown was without a home at age 16, and relied on friends and coaches for safe harbor. Adapting to any situation — and doing it with a smile — became his forte on and off the field.

“The only thing you can do when you’re in a tough situation is to have a singular vision,” Brown says. “Every single day, you have to remind yourself of where you want to be, not where you’re at.”

Perhaps it’s not hard to be humble when you go from Top Ramen to top shelf in just a few short years, as Brown did when he inked a contract extension that will keep him in black-and-gold until 2017. But even when he was still on his league-minimum rookie contract in 2010, Brown made it a point to be a man of the people.

After touching down in Indianapolis the week of Super Bowl XLV, Brown sent a message to his Twitter followers simply asking, “Indianapolis, what’s up?” Seth Paladin, a member of the Steeler Nation diaspora living in Indy, sent Brown a message back offering to hang out and show him the city. Incredibly, Brown accepted.

“The next thing I know, I’m sitting in Antonio Brown’s hotel room,” Paladin remembers. “And he’s just sitting there eating a sandwich, talking like we’re old friends. Next thing I know, he asks if I want to go work out with him.”

The two new buddies ended up going to Paladin’s gym to swim laps and do Pilates for the next four days. To pay Paladin back for his hospitality, Brown took him and five friends to an Indiana Pacers game, where they sat courtside. As the crew walked back to the car after the game, Brown once again proved his innate ability to roll with the punches. “This guy ran right up to Antonio convinced he was [former NFL great] LaDanian Tomlinson,” says Paladin. “I think the guy had one too many beers, and he’s yelling, ‘LaDanian! LaDanian!’ And Antonio just played right along with him. It was great.”

Later in the week, when Brown became overwhelmed with pre-Super Bowl preparation and realized he forgot to pack dress shoes, he gave Paladin his credit card and asked him to track down a pair of size 11 Gucci loafers.

“I know the guy four days and he trusts me with his credit card,” Paladin says. “Maybe I should’ve bought him an extra pair, just to be safe. He’s been losing his shoes lately.”

This article appears in the December 2012 issue of Pittsburgh Magazine.
Categories: From the Magazine, Hot Reads, Steelers