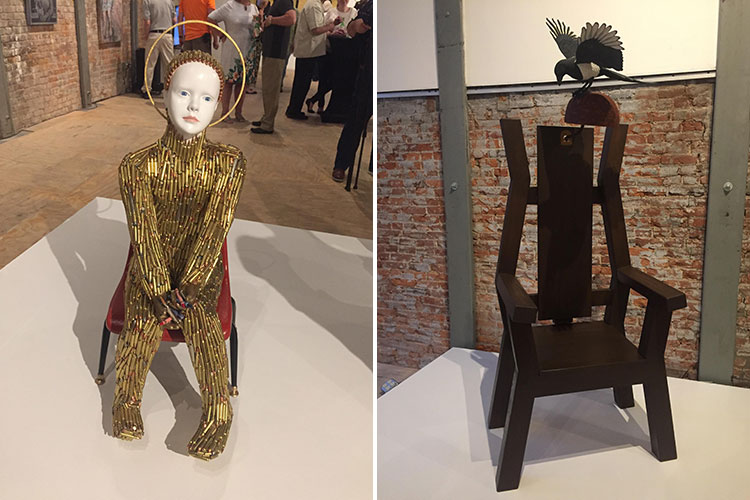 Perhaps it’s more than ironic that the Juried Visual Art Exhibition is not high on the list of things people associate with the Three Rivers Arts Festival. But it should be given the range of work on display inside the Trust Arts Education Center at 805-807 Liberty Avenue in the Cultural District.

“This is how the festival started in 1960; it was a juried show,” says festival director Sara Aziz of the Pittsburgh Cultural Trust, which is responsible for the annual 10-day event.

While there was a crowd of artists, art lovers and VIPs gathered on Thursday, June 6, for the opening of the exhibition, it’s rare to find patrons who are eager to leave the heart of the festivities in Gateway Center and venture up to the Cultural District.

“We struggle to get people to cross Stanwix Street,” Aziz says.

Those who make the journey will be rewarded. Artists interpreted the theme of “Remember Me” in creative and sometimes unexpected ways. Striking when you enter the gallery is one of many thoughtful pieces: Marlene Boas’ “Assassination of Innocents,” a sculpture of a child sitting on a school chair. The child’s body is made of bullets and holds a handful of crayons, which strikingly are shaped not unlike the bullets.

Stop on the third floor to see a retrospective of the festival featuring 60 years of program covers (you’ll note how art trends have changed over the years), slides from the archives, photos from the 1985 festival and the 50th anniversary quilt and memorabilia.

James McQuaid, CEO and President of presenting sponsor Dollar Bank, told the gathering on Thursday that “the festival is huge for the quality of life in the region,” noting its cultural, social and economic impact.