Dome away from Home

Pittsburgh visitors or locals looking for a getaway can rent the Yaca-Dome, the original dome house built by the late designer Joseph Yacoboni. 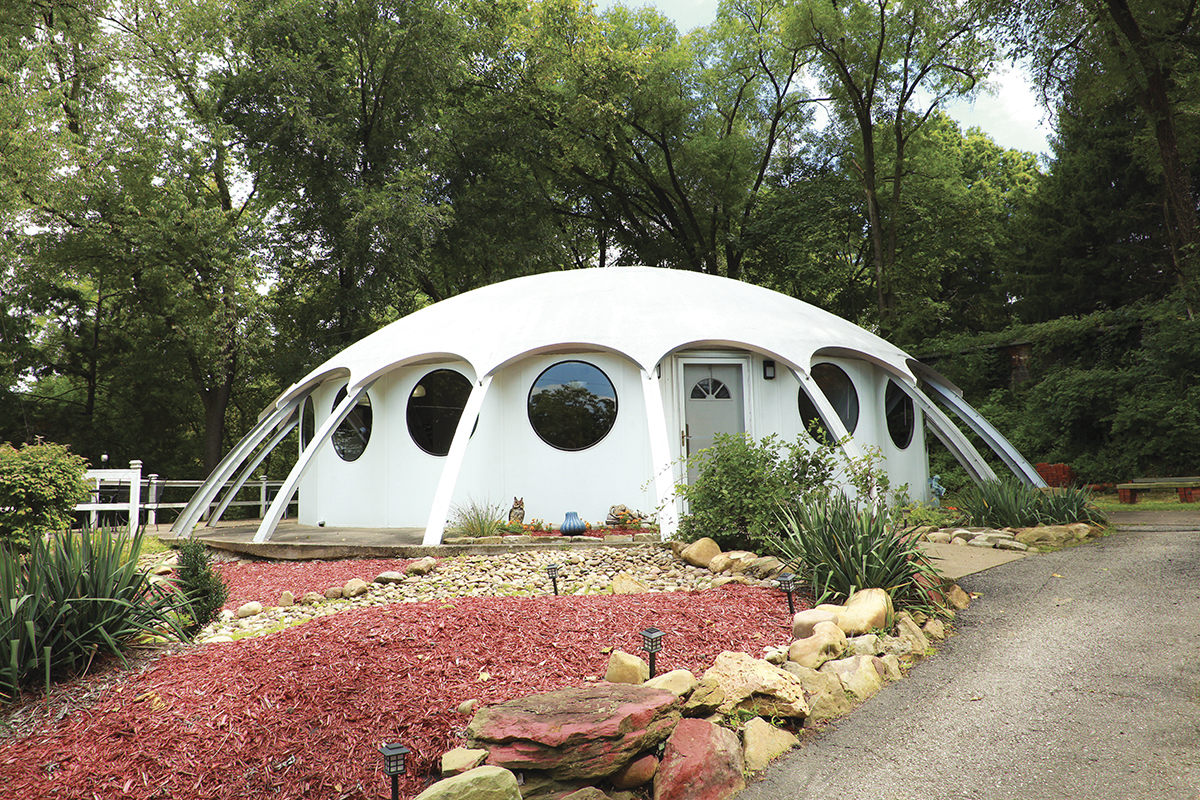 Down a narrow dead-end road in the East End of Pittsburgh, beyond several traditional square houses, the round structure juts from the ground like a vessel from outer space.

Visitors have been known to exclaim, “Wow!” or slam on their brakes as they gape at the original “Yaca-Dome,” a white steel-frame dome named for the late landscape designer Joseph Yacoboni, who built 26 of these round homes across the country.

“It looked like a glowing spaceship,” says Alice Groesbeck, of Frederick, Md.

Groesbeck and other recent visitors have slept inside the curved contours by renting the dome through Airbnb [airbnb.com], the popular home- and apartment-sharing site.

Peering out the dozen-plus windows that line the circumference of the dome illuminates for guests the vision of Yacoboni, who was known to say, “There are no squares in nature” and wanted to bring the feeling of the outdoors indoors.

Yacoboni built his original dome in 1969 in Pittsburgh, then moved to Lake Placid, Fla., to build a few more, including a double dome with a swimming pool in the middle. The home in the Lincoln-Lemington section of Pittsburgh changed hands several times before sitting vacant for years, its pipes bursting, the roof leaking — a sorry state for the once-gleaming futuristic house.

When real estate developer Azhar “Lee” Leeton first visited the house in 2010, the brush around it was so overgrown he could barely see it.

But once Leeton made his way to the dome on Olivant Place and saw the extraordinary structure, he says he couldn’t resist buying it. He restored it, plastered walls, replaced plumbing, added a new boiler with hot-water heater, installed new flooring and whacked down years of overgrowth. Last spring, he began renting out the house — he nicknamed it “The Igloo” — after furnishing it simply. Rates for the short-term rentals vary by date and availability.

Guests ranging from actors in “The Lion King” touring musical to musicians to parents of students attending nearby colleges have slept inside the three-bedroom house. As visitors step inside, they often say, “It’s bigger than it looks.”

“It’s [about] 1,250 square feet,” Lisa Podolinski, the project manager, tells them. Then she catches herself. “Actually there are no squares.”

It’s not easy to find the dome through a maze of smaller streets off Washington Boulevard just southeast of the Pittsburgh Zoo & PPG Aquarium.

In fact, Podolinski spent months sending messages to Google Maps before the global mapping service added the address. At one point, she sent the site its own aerial image of the dome with the message, “You will see a large round structure. That is where the address is.” Even though she advises her guests on directions, she often fields calls from lost visitors.

Once guests find the dome, they can relax on a brown sectional in the living room with a high ceiling in the center and peer out round windows that overlook a secluded wooded area. The house can sleep six people and has a small kitchen with a retro-looking checkerboard floor.

Tom Goss, a rock musician from Washington, D.C., and his band mates rented it during December. Though he had seen geodesic domes before, Goss says he had never seen a round one held up by steel beams. The creative space helped him to unwind after demanding days in the recording studio.

“I loved the dome,” the musician says. “It puts your mind in a different space. After a super-intense day, it is very peaceful.”
He initially worried about driving down the narrow road during a particularly rough Pittsburgh winter last year. But he said Leeton shoveled the driveway and made passage easy. “We enjoyed the beauty of winter in Pittsburgh.”

Groesbeck, a senior editor for servingcinema.com, says she liked the sensation of looking at the curved white walls during a reunion with a few friends from Edinboro University of Pennsylvania. 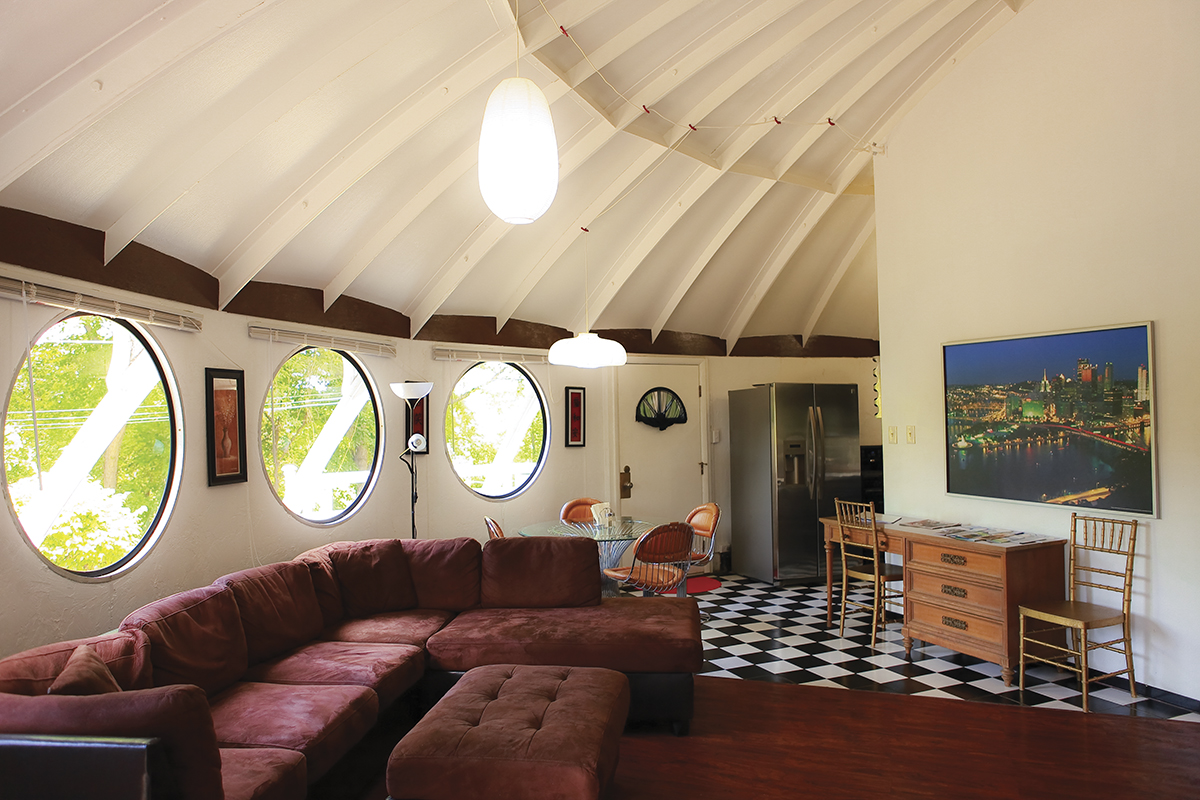 “Because it was circular, we wanted to sit in a circle and catch up. It is the kind of place that brings people together.”
She also liked looking out at the view of the woods during their stay. “It felt like we were in a tree fort,” she says.

Celeste Yacoboni, the daughter of the late dome maker, is thrilled that the original structure has been restored and can be rented so more people can enjoy her father’s invention. He died three years ago at age 89.

The father of three children, Celeste, Ty and Brian, was an artistic man who built Japanese gardens, pagodas and topiaries. Inspiration for this design struck when he threw a handkerchief in the air and it filled with air, forming a dome shape.

“He loved the flow of air in a circle, the flow of energy, the outside coming in,” Celeste says. “There are a lot of round structures through history, from cathedrals to the womb. It is natural and soothing.”

Her father’s idea was to make a prefabricated home that was energy-efficient, affordable and could withstand the elements — the house is so sturdy that it can endure tornadoes and hurricanes.

He received nine patents, including one for an earthquake bolt attached to the 51-foot-in-diameter concrete footer of the dome. Steel ribs climb from the footer up to a central ring at the top of the dome. Yacoboni also created pie-shaped insulated fiberglass roof panels.

“He had to fabricate it in a careful way that maximized the curve,” says his former neighbor, Irvin Guyett, a psychologist who rented from Yacoboni while he was building the dome. “He was so creative. His intention was to build a house that you could buy from Sears and load it on a truck.”

The walls of the dome are not weight-bearing, making it easier to change the floor plan of rooms. Dome owners can add a loft on the second floor, says Celeste, who lives in a double dome in New Mexico.

The design was so innovative it was featured in Popular Science, Popular Mechanics, Mother Earth News and many other magazines, Celeste says.

But Yacoboni’s dream of making dome living mainstream was never fulfilled. His 92-year-old widow, Carmela “Millie” Yacoboni, says he had an offer from a steel company, but banks wouldn’t finance it. “The man was far ahead of his time,” Millie says. “I think today it would have been a go.”

Even if he never spread the gospel of round living, visitors now can experience it in Pittsburgh.

“It was a magical experience,” Groesbeck says. “It’s like you’re entering a new dimension.”

This article appears in the October 2014 issue of Pittsburgh Magazine.
Categories: HOME + Design