Warning: Cuteness overload to come. Here are some pictures of couples’ furry friends who joined their masters’ wedding-day festivities that are sure to warm up your heart in this cold weather. 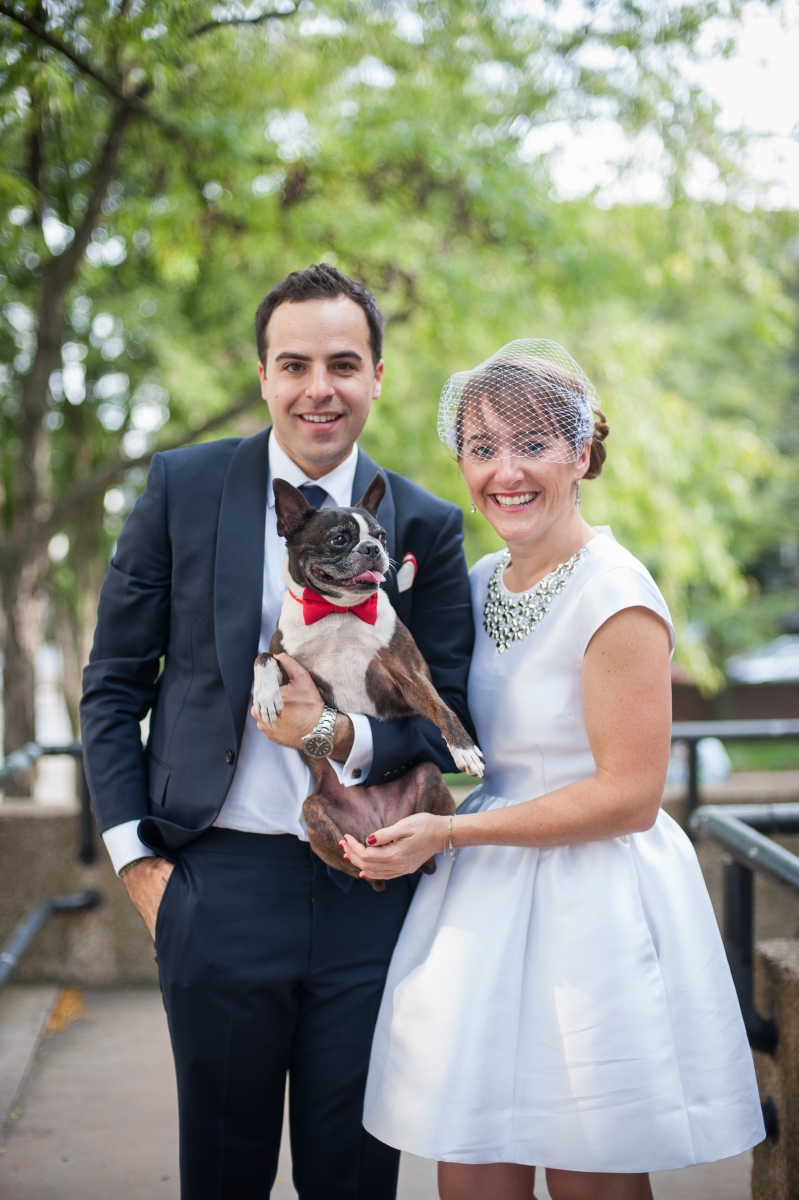 Chloe, a 7-year-old Boston terrier, donned a fancy red bow tie for her owner Mike Metz’s wedding to Lindsay Flinn. The pup served as the greeter outside the New Hazlett Theater, where the couple held their ceremony on Sept. 20, 2014.

She also was responsible for Mike meeting his future bride. In 2008, he was headed out of town when his dog sitter canceled at the last minute. His roommate emailed coworkers in a desperate search for a replacement, and Lindsay volunteered to help. The couple did not meet in person that weekend, but when they met a few months later, they hit it off.

“I would say [Chloe] chose Lindsay,” Mike says. They knew they wanted Chloe to be involved in their wedding but weren’t sure if it would be practical to include her in a full day of festivities — hence their decision that greeter would be the perfect position for their pooch. 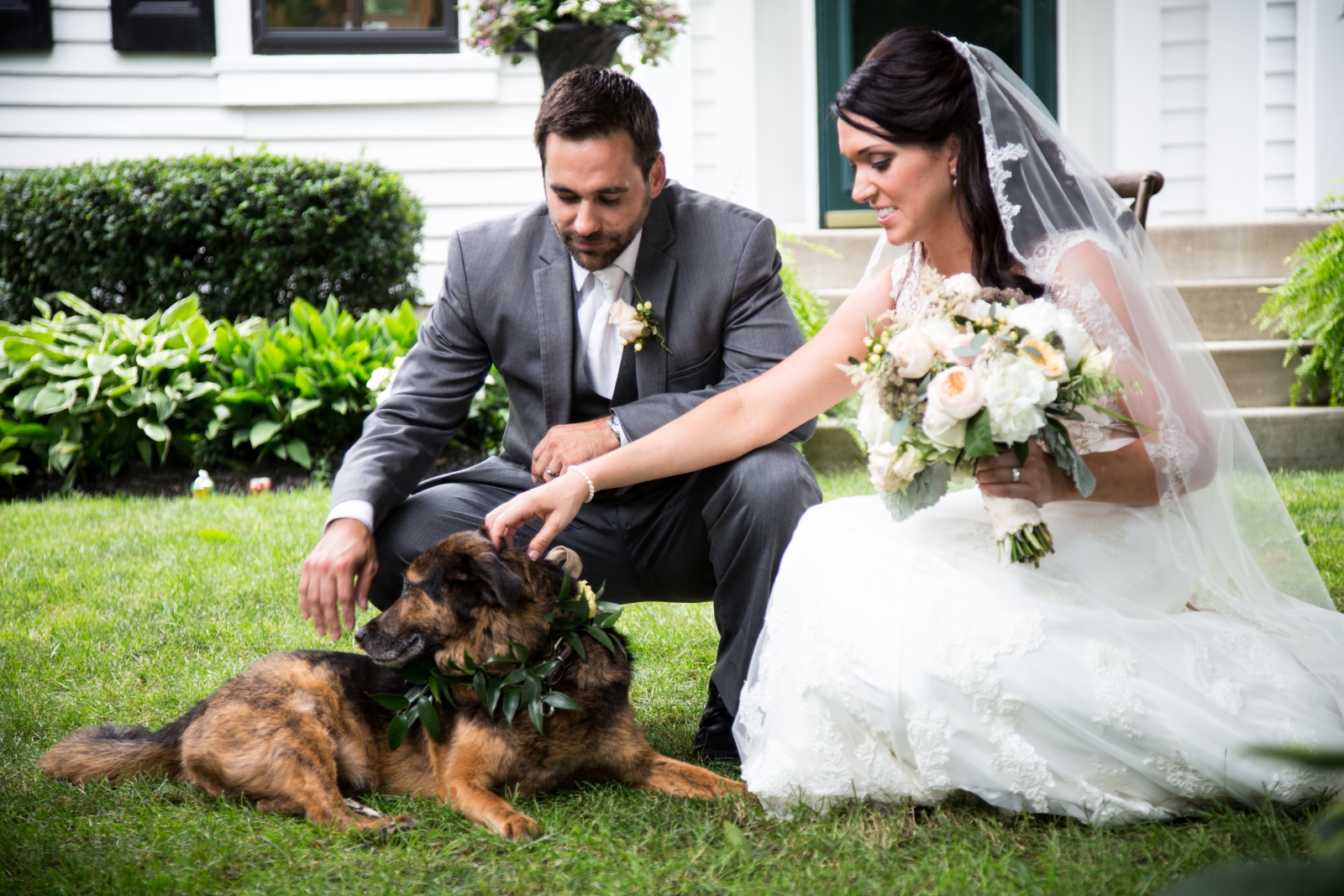 photo by dave and mary photography

While hiking in the Himalayas during a study-abroad trip in 2002, Lauren Shuty grew attached to a puppy at a guesthouse where she was staying. She bartered with a Tibetan woman and exchanged $4 for the pup, Anna. Lauren then hiked for several days with Anna strapped to her body like a baby. After the intense bonding experience, she decided to bring the dog home to the United States.

“Anna is probably one of the most special dogs out there because she has such an interesting backstory and history,” Lauren says, noting she doesn’t know Anna’s breed.

When Lauren met her future groom, Jason Smathers, she owned Anna as well as another dog, Gracie. After Jason proposed, the couple planned to include both dogs in their June 21, 2014, nuptials, but Gracie died before the wedding.

Anna served as the Flower Dog, escorted by one of Lauren’s friends who had traveled with her to Nepal.

In that country, some people worship dogs on certain days and adorn them with garlands of marigolds. Bright orange marigolds did not fit the aesthetic of Lauren’s wedding, but Anna wore a white marigold garland. She also wore a locket around her neck that held Gracie’s ashes. Anna attended the reception and went from table to table greeting guests. 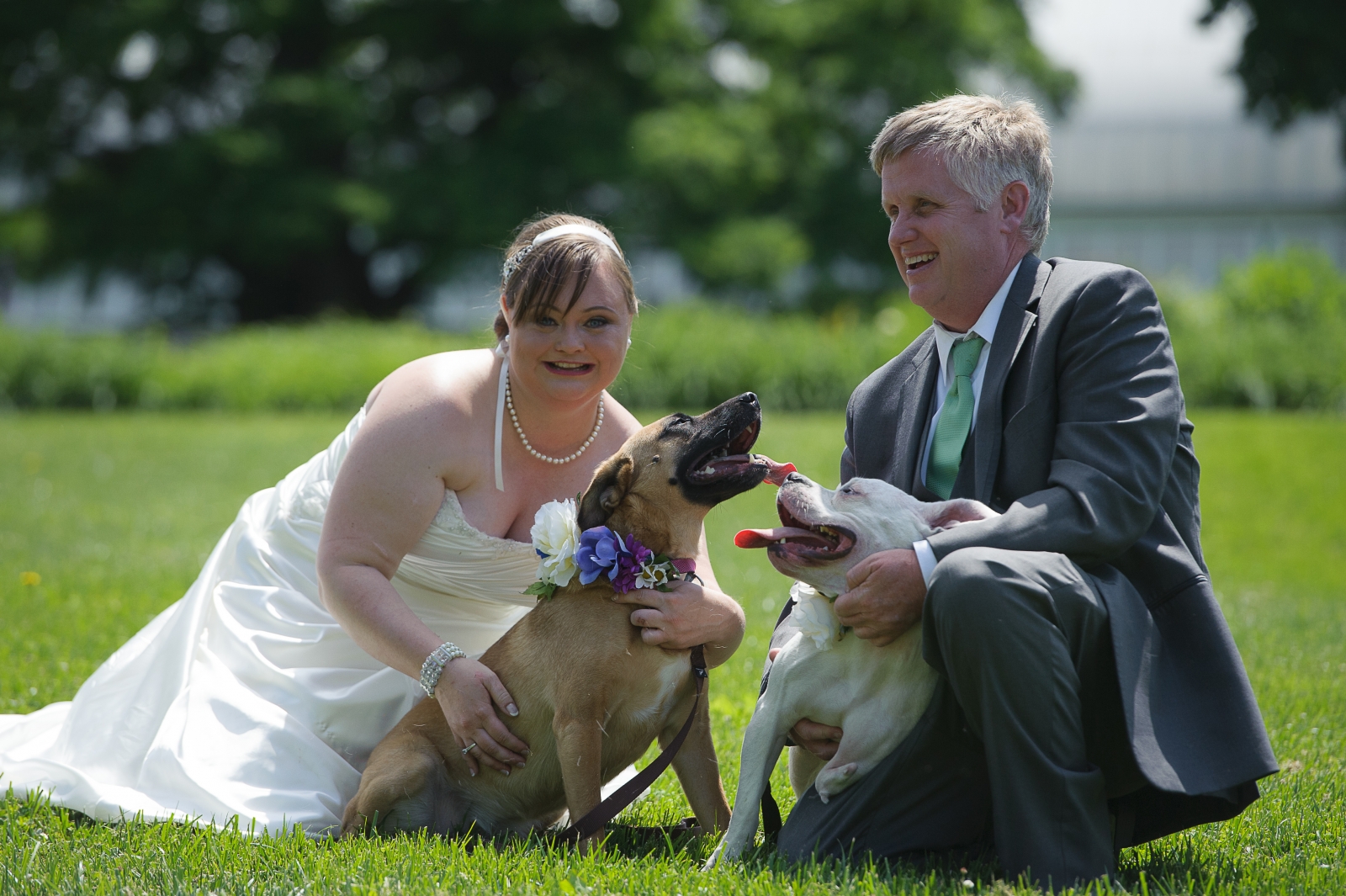 Dog lovers Angel Brownawell and David Whalen rescued Skylar, a German shepherd, shortly after they purchased their first house in 2011. “She really became such an integral part of our life . . . We grew together, all three of us,” Angel says.

The couple’s love for Skylar led them to volunteer for animal-rescue efforts. They fostered about 13 dogs before Maybel, a three-legged pit bull and bulldog mix, came into their lives. They hadn’t planned on adopting another dog before their wedding, but they fell in love with Maybel.

When David popped the question, he opted to give a necklace to Angel because she had her eye on a ring she wanted to customize online. He tied the engagement necklace around Skylar’s neck after a Sunday-morning walk and sent Skylar to hop into bed with Angel before he proposed.

Angel says she was heartbroken when she discovered that her beloved pooches would not be permitted to join her ceremony on June 1, 2014 at Phipps Conservatory and Botanical Gardens. Instead, she and her groom opted to hold a portrait session before the ceremony with Skylar, Angel’s unofficial Dog of Honor, and Maybel, the Flower Dog. Both dogs were garbed for for the occasion, wearing collars with silk flowers attached. 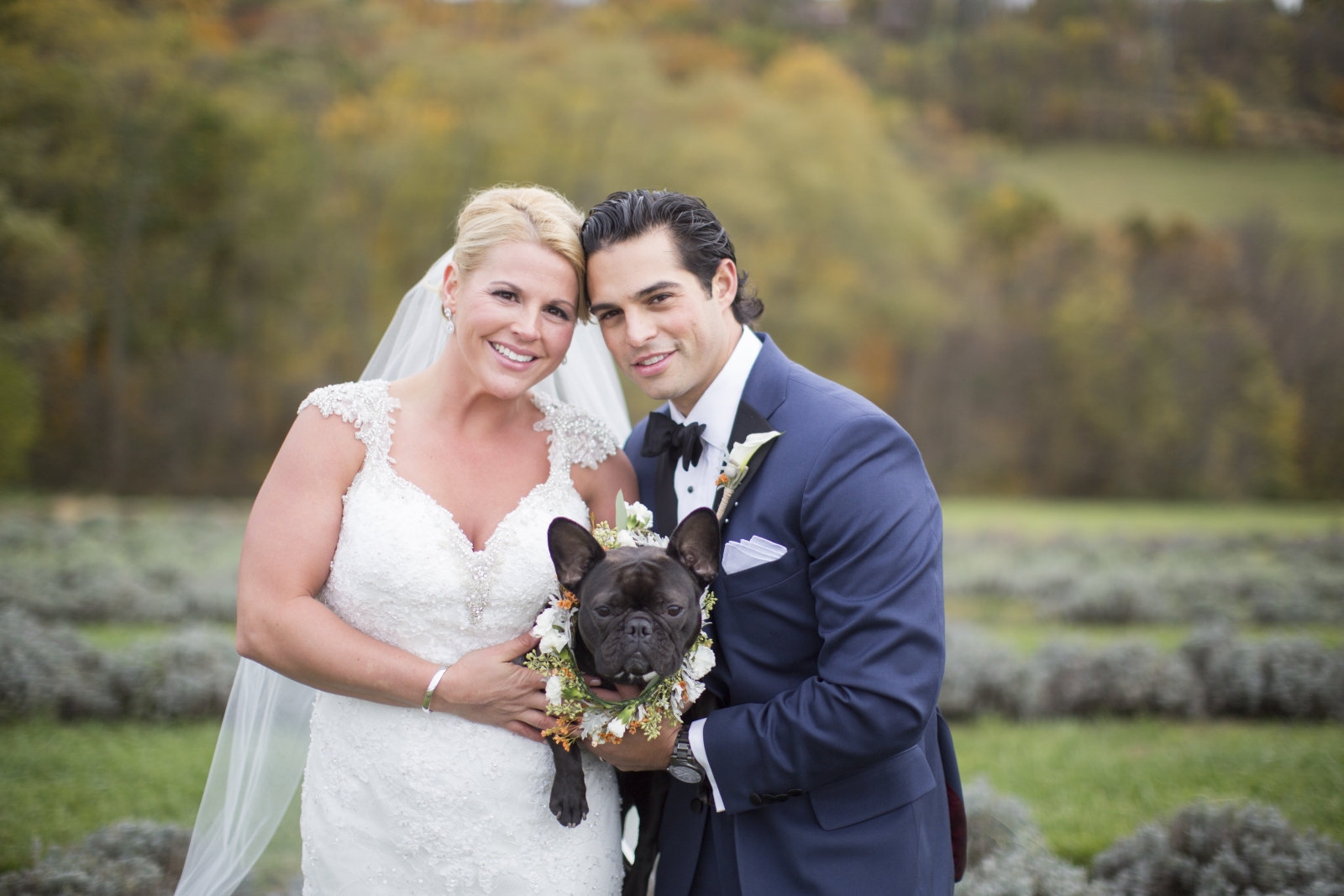 Shannon Hadaway wanted Lola, her 3-year-old Frenchie, to participate in her wedding ceremony, but she didn’t believe Lola would be permitted to walk down the aisle during the ceremony at St. Patrick Roman Catholic Parish in Canonsburg. Still, Shannon and her groom, Andrew Rossi, found a way to incorporate Lola in their wedding photos at their reception venue.

“I couldn’t imagine her not being there. She’s such a big part of our life,” Shannon says.

Lola showed up in a floral collar for a photo shoot at Destiny Hill Farm after her owners tied the knot on Oct. 18, 2014. She also was the star of the couple’s save-the-date postcards, which featured a picture of her among pumpkins at the Fall Festival at Seven Springs Mountain Resort.

Andrew presented Lola to Shannon as a birthday present, but he says he soon realized that Lola was a gift for both of them. Although he surprised Shannon with the pup when she returned from a trip out of town, he fell in love with Lola as well.

“She’s like our little furry child. He just loves her so much. I feel like it’s how [caring] he’ll be with our kids when we have them,” Shannon says.